Love of discovery, not public speaking, inspires most scientists to choose their careers. Yet most researchers find that success in science and giving lectures go hand in hand. Some have even found that speaking pays quite handsomely-but they are the exception to the rule. "Only a very few scientists get rich giving talks," observes Robert Anholt, a professor of zoology at North Carolina State University. Anholt is the author of Dazzle 'Em With Style (New York, W.H. Freeman and Co., 1994), a book drawn from his experience instructing graduate students in the fine art of scientific presentation. He adds, however, that a good reputation as a speaker "certainly helps your career and promotes your research program."

For example, Anholt explains, audiences at a scientific meeting may include study-section members who might someday decide the fates of presenters' grants, as well as colleagues who could be asked to review manuscripts for publication. "A memorable presentation may help your reputation," he says. "These are the kinds of rewards most scientists get from speaking."

Society meetings and academic colloquia are important, but they're not the only venues open to scientific speakers. Some researchers receive far better-paying invitations to address corporate audiences interested in their work. Many also welcome the chance to talk to community and school groups, from whom they receive little except gratitude.

For a few scientists who have achieved popular fame, however, giving talks to nonscientific audiences can be lucrative. Most such speakers have written best-selling books or served in high-ranking government positions. Some are represented by agencies that promote and manage their public speaking careers.

Offers to speak can be attractive, says Steven Pinker, a professor of psychology and director of the Center for Cognitive Neuroscience at the Massachusetts Institute of Technology and author of a popular book, The Language Instinct (New York, HarperCollins Inc., 1994). But, he cautions, "if you don't have a solid research track, you can find yourself doing things for money that won't help you in your scientific career." Even established scientists are vulnerable to these temptations, he adds: "If you spend all your time writing popular pieces and giving talks, you can say goodbye to research."

To the vast majority of scientists, public speaking means talks at professional meetings and departmental seminars. At large meetings, where hundreds of researchers may give oral presentations at concurrent sessions, the most prestigious invitations go to participants in plenary sessions or symposia and those who give keynote lectures. Such speakers address the entire society-sometimes thousands of researchers.

"It seldom happens that you want a speaker-especially a keynote speaker-to tell the nitty-gritty details of a very narrow field," relates Anholt. "Instead, you want someone who tells a good story, who can paint a broad picture of a field and describe their accomplishments in that perspective." For smaller meetings and departmental seminars, he adds, "you want someone who's approachable, who shows a genuine interest not only in his own work, but in the scientific activities of his colleagues at the host institution."

Several organizers report that when selecting speakers to invite to a national meeting, they rank hot results as the most important criterion. "Fundamentally, one looks for scientists with the most exciting, latest discoveries," says Edward Dennis, a professor of chemistry and biochemistry at the University of California, San Diego. Dennis chaired the program committee for this year's meeting of the American Society for Biochemistry and Molecular Biology (ASBMB) in New Orleans.

Because his committee made its selections 18 months in advance of the meeting, he continues, "we tended to choose people with long records of accomplishment." However, he notes, at the recent meeting, several symposium presenters were invited to give talks based on the quality of poster abstracts they submitted. By doing this, Dennis says, "we opened the oral sessions up to younger people. It was very successful."

Some program committees also make an effort to invite diverse speakers. "We wanted terrific scientists who were excellent speakers with fair representation of women [and] national and international speakers-and we got it," reports Mina Bissell, chairwoman of the scientific committee for the upcoming Sixth International Congress on Cell Biology and annual meeting of the American Society for Cell Biology (ASCB), which will be held next month in San Francisco. "If we did not have a fair representation for any reason, I would have intervened," adds Bissell, who is director of the life sciences division at Berkeley National Laboratory.

An invitation to address a major scientific meeting is widely considered to be an honor, not a service. Accordingly, few scientific societies pay their invited speakers. For example, ASBMB, ASCB, the American Association for the Advancement of Science, the Society for Neuroscience, and the American Federation for Medical Research (AMFR) do not provide honoraria for speakers at their annual meetings. But most of these organizations pay at least an allowance toward travel and accommodation and waive registration fees for keynote and plenary speakers. Similarly, scientists who are invited to speak, for example, at meetings of Britain's Biochemical Society or at the 1997 Congress of the International Society for Plant Molecular Biology in Singapore receive free accommodations and registration; the Biochemical Society also provides a travel allowance.

When recognition of a scientist's work spreads beyond his or her specialized field, invitations to speak to broader audiences tend to follow. Thomas Cech, distinguished professor of chemistry and biochemistry at the University of Colorado in Boulder, recalls that after winning the Nobel Prize for chemistry in 1989, he began receiving numerous speaking requests from community groups, schools, and business organizations. Before the prize, he says, "I got maybe one such request per year. Since then, I get about one a week."

That was on top of an already busy schedule of research, teaching, and giving talks to other scientists. Now, when he gets an invitation, "I consider the amount of time involved, the impact the talk will have, and whether I'll get something out of it," he says. "For example, if I'm asked to speak at a conference, my main criterion will be: What will I learn by attending?" On the other hand, he continues, when speaking to profit-making organizations and companies, "one expects to receive an honorarium."

These can vary, depending upon the type of company and the nature of its request. According to several scientists interviewed for this story, $2,000 is considered a typical honorarium for a speech to a corporate audience. But the pay for such talks can go much higher, according to Lisa Bero, an assistant professor of clinical pharmacy and health policy at the University of California, San Francisco. While she was conducting a study on research symposia funded by the pharmaceutical industry (M.K. Cho, L.A. Bero, Annals of Internal Medicine, 124:485-9, 1996), Bero says, she was told by organizers and speakers-typically, clinical researchers associated with a university-that presenters were paid between $5,000 and $15,000.

Cech estimates that he accepts about one invitation per year to talk to a company. In contrast, he typically takes one trip per month to speak to general audiences, and two or more for professional meetings or other universities. He's also learned to adapt one basic speech to a broad range of audiences. "I've found I can give the same talk to a group of chemists, biologists, college alumni, and high school students," he observes. "The words are different for each group, but the basic content is the same."

"I enjoy that," he adds. "I find it a challenge to get concepts across to people who thought they were just coming to see a Nobel Prize winner."

Perhaps less typical of other Nobelists' experiences is that of Roald Hoffmann, a professor of chemistry at Cornell University, who recalls that he gave numerous talks to nonscientific audiences prior to receiving the chemistry prize in 1981. Hoffmann is also a published poet, so giving readings has become an important part of his speaking career.

"What I like to do best," he says, "is travel to a university and stay two or three days, during which I give a science lecture [to chemists], a general lecture, and a poetry reading." Because he's trying to build a reputation as a poet, Hoffmann notes, he will often accept invitations for readings that pay nothing except his travel expenses.

"Some of my colleagues in science have discovered that if they want me to give a talk, they go to the English department and say, 'Why don't you ask that guy to give a poetry reading?'," he wryly observes. "I would really prefer a bona fide invitation from the writers."

On the other hand, Hoffmann adds, "if I receive an invitation to give a lecture and sense there's no real interest in my work, that it's only to make the sponsor look good, then I charge a lot." Some of his most lucrative offers-which he's turned down-have come from Japanese newspapers, he recalls. One high-paying invitation he did accept: a lecture series in Taiwan. "Industrially developing countries-Taiwan, Korea, and Singapore, for example-will invest a lot to bring in foreign scientists," Hoffmann explains.

The few scientists who do command lofty speaking fees tend to be those who have written popular books, hosted television series, or served as high-ranking government officials. Those in the last category must usually wait until after retirement to reap big bucks, as government employees are forbidden even to accept compensation for expenses related to speaking ex officio.

Having achieved the status of public figures, many such scientists and policy experts choose to be represented by speakers' agencies, which promote and manage their appearances. Compared with the legions of motivational speakers touted by such bureaus, the number of scientists is minuscule. Even a book-centered agency such as New York-based Authors Unlimited, with its roster of more than 400, represents only a handful of science-related speakers, according to president Arlynn Greenbaum. They include authors of various health guides, a neurologist whose most recent book discusses the neurology of sports, and a surgeon who writes about the connections between art and physics; their fees range from $2,000 to $5,000 per speech, including expenses, she reports. Other agencies quoted fees of up to $25,000 per lecture for certain famous authorities on science and medicine.

Several prominent scientists interviewed for this story reported they had been contacted by speakers' agencies, but most had declined their offers of representation because they preferred to have control over their speaking fees and schedule. One who did accept, physicist James Trefil-author of several popular books on science and science education, including A Scientist in the City (New York, Doubleday, 1994) estimates that he gets only one or two speaking engagements per year through Authors Unlimited.

Sought-after scientists without an agent say they set their own fees according to a sliding scale. "One reason I charge people is I think they pay more attention," observes Stanton Glantz, a professor of medicine in the division of cardiology at the University of California, San Francisco, and coauthor of The Cigarette Papers (Berkeley, University of California Press, 1996). Several other researchers interviewed for this story made similar observations; most also said they thought they could get more than they typically charge for speaking. None of them, however, would quote their fees for publication.

"I try not to do anything just for the money," says Glantz, a longtime anti-smoking activist who conducts research in both science policy and biomedical engineering. "You can do work that gets you in demand [for speaking engagements]," he continues. "That's fun, they treat you like a big shot. . . . But if you spend too much time flying all over the place, the home fires can go out."

Perhaps it's a blessing, then, that relatively few scientists are faced with the dilemma of balancing the demands of a lucrative speaking career with those of research and possibly teaching. As North Carolina State's Anholt observes: "Scientists are a lot like actors in achieving fame. For every Robert Redford, there are thousands of unknowns in the cast."

Alison Mack is a freelance science and medical writer based in Wilmington, Del.
Related Articles 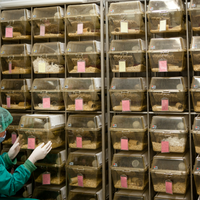