To control a genetic regulatory network, you have to find its lever points, says Ilya Shmulevich. The engineering terminology isn't surprising: Shmulevich, now an associate professor at the Institute for Systems Biology (ISB) in Seattle, finished three degrees in electrical engineering, a postdoc in computer music recognition, and a stint at a Finnish signal-processing institute before he made the leap into biology.

"I was looking for important applications of my work," says Shmulevich. "Many of the same tools that I was using and the same kinds of methods that I was developing in machine learning or filter design were applicable to the problems in microarray data analysis or genetic network modeling."

Today, he uses his own novel computational models to map genetic networks, classify cancers, understand immune responses, and perhaps even to resolve fundamental differences between living and nonliving things. "Ilya keeps coming up with these wonderfully wacky ways of trying to ask whether it's true of real cells," says Stuart Kauffman of the University of Calgary. "He's just done astonishing things that nobody would think of. ... [He's] just brilliant."

The importance of networks

Shmulevich grew up in Moscow. When he was 12, his family moved to Ohio. He went to Purdue University as an undergrad, majoring in electrical engineering, and he stayed on there as a masters and then PhD student. As a graduate student, Shmulevich researched nonlinear signal processing and image processing, and then spent a little more than a year as a postdoc in the Netherlands, creating computational models of music perception.

As a senior researcher at the Institute of Signal Processing at Tampere University of Technology in Finland for several years after that, he began to think about what type of career he wanted. "I became very interested in bioinformatics and started learning about microarray technology and reading about genetic network models," Shmulevich says. "That really got me quite excited, because I realized that much of what I had learned, and had research experience with, could be applicable to this new area of computational biology."

While at Tampere, Shmulevich's job included helping foreign scientists coordinate research visits to the institute. "I got to meet all these people and work with them," he says, including Edward Dougherty, director of a genomic signal-processing laboratory at Texas A&M University in College Station, who was then closely involved with the cancer genomics lab at University of Texas M.D. Anderson Cancer Center in Houston. The director of the signal-processing center where Shmulevich worked "is a good friend of mine, and he suggested that Ilya would be one of the best people I could get," says Dougherty. "I asked him if he would come to the United States and work with me."

So, after three years in Finland, Shmulevich officially began his career in biology in 2001, when he became a visiting scientist in Wei Zhang's cancer genomics laboratory at M.D. Anderson. "It was a big change climate-wise," Shmulevich says, and "the move was big also in a professional sense. I was starting a position in a cancer center, working directly with biologists and clinicians, a very new experience for me at that time."

"We needed a lot of informatics support," Zhang says, but, because Shmulevich had no formal training in biology, "I was not so sure how well it was going to work out," he admits. "After he came, within a month or so, all doubts just disappeared. ... He was just so sincere and he really was interested in learning biology and becoming a player and a contributor in cancer genomics," Zhang says. "I work with a lot of statisticians and other informatics people, and I haven't seen another person who was as truly interested in learning biology as Ilya."

Zhang and Shmulevich began a productive collaboration, using Shmulevich's computational models to find molecular signatures that differentiate heterogeneous types of cancers and give insight into tumor progression and treatment potential. Besides the work with glioma networks, Shmulevich and Zhang worked on projects to find sarcoma subgroups that are responsive to specific therapies and to find molecular characteristics of different types of malignant lymphoma. Within six months of joining M.D. Anderson, Shmulevich had a tenure-track assistant professor position.

What the networks tell us

In 2002, Shmulevich published papers revealing a new type of computational model for mining gene expression data to derive genetic networks. Called Probabilistic Boolean Networks (PBNs), Shmulevich's invention is built on the Boolean network model Kauffman introduced in the late 1960s. Boolean models consist of gene regulatory networks in which gene expression is considered to be in only one of two states - ON or OFF - and genes are connected to each other by logical rules. Shmulevich adapted this model to take into account uncertainties in both the data and the model: His networks incorporate the probabilities that a gene will have a variety of effects on other genes in the network.

By feeding DNA microarray data into a PBN model, Shmulevich and his colleagues can infer the structure of the underlying genetic network. And by using microarray profiles from different cellular types or diseased tissues, they try to understand the types of differences in network structure that account for these states.

PBNs have helped move beyond simple expression profiling to a more-integrated understanding of genetic interactions, says Zhang. When Shmulevich first came up with the modeling idea, "I was very skeptical," Zhang says, but "then we actually applied his mathematical model to a real set of gene expression profile data from a brain tumor," he says. "We actually got some fantastic data."

They knew from microarray profiling that expression of insulin-like growth factor binding protein 2 (IGFBP2) increases with brain tumor progression, but no one knew how the protein may contribute to cancer progression, Zhang says. When they analyzed microarray data from patients with brain cancer using a PBN model, they found a link between IGFBP2 and integrin-linked kinase, which suggested that IGFBP2 could regulate cell adhesion and invasion. When they tested this idea in cell culture, the model's prediction was borne out, Zhang says. "It really helped us understand the biology quite well."

Shmulevich says that understanding genetic regulatory networks involved in cancer will help identify the system's lever points - the perturbations that would optimally move the network toward a desired state, such as apoptosis. "Rather than just relying on screening methods, the goal is to have principled and systematic ways of controlling cellular behavior in disease," he says. "And that can only be done with mathematical and computational modeling, because these are very complex systems."

Many of these projects and collaborations continue in Shmulevich's new post at ISB, which he assumed in April 2005. Shmulevich and Zhang are now collaborating with Nathan Price, a postdoc in Leroy Hood's lab at ISB, to find molecular differences between gastrointestinal stromal tumors and leiomyosarcoma. These two types of cancers were, until recently, thought to be identical, Price says.

Shmulevich has also begun new projects with many of ISB's investigators. "He's become the main hub for computational ideas at ISB right now," says Price. "Lots of people like to work with him and collaborate with him. ... His office is packed with people virtually all day," Price says. "He's just the kind of person you can bounce ideas off. He's very creative and he listens very well."

Price's boss agrees. "Ilya is a delightful, energetic, spontaneous, enthusiastic collaborator, the kind that is just ideal to work with," says Hood, who is president of the institute. "He's really, I think, brought substantial passion, knowledge, and enthusiasm to ISB."

Several collaborations at ISB put to use an old area of Shmulevich's expertise, image processing. He's working to automate image analysis that will, for example, count GFP-tagged organelles in yeast cells or convey information about a cell's size, shape, or movement patterns. He's also working on analyzing images from microfluidic devices that measure levels of mRNA and secreted proteins in single cells.

Many people in Shmulevich's group - which includes five senior scientists, two software engineers, three PhD students, and a postdoc - are focusing on an innate immunity collaboration with ISB director Alan Aderem. They're trying to understand, from a network perspective, of course, how macrophage signaling and gene regulatory networks control the cellular response to various bacterial and viral pathogens.

Shmulevich thinks that gene network models have more to offer, and perhaps can even provide insight into what makes living systems unique. In collaboration with Price and Kauffman, he is developing models to explain how cells respond appropriately to environmental perturbations. "A cell needs to make a tradeoff between stability and adaptability," Shmulevich says, "and those kinds of issues have been looked at in the context of criticality."

A network is considered critical if its behavior lies at a boundary between chaos (when small perturbations amplify over time) and order (when small perturbations tend to damp out). Shmulevich and his colleagues are trying to figure out if living systems exist at this fine line. They've found evidence that genetic networks in HeLa cells (see Opinion, p. 22) operate either in an ordered state or at the critical line, but not in a chaotic state. They're now trying to show experimentally, using microarray data and a variety of perturbations, that many cell types exist near this border, says Price.

They're also developing theoretical studies to examine why existing at the border between order and chaos might be important for biological systems allowing them to optimally sense their environments, Price says.

Shmulevich seems to have found a good environment for his ideas at ISB. "He has this bias, as I do, that the enormous complexity of biology can only be addressed by really beginning to think about, in very deep ways, biology as an informational science," says Hood. "It means really recasting and rethinking how we deal with biological information and how we analyze biological problems. And I think Ilya is really going to be one of the pioneering leaders in this informational approach to biology."

Texas A&M's Dougherty agrees. "He's among the best in the field," he says. "I wish he'd come here. Unfortunately, he likes Seattle, but I haven't given up." 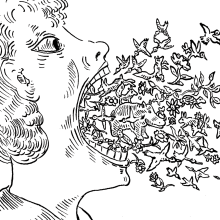