By bringing genetics into clinical medicine, the University of British Columbia medical geneticist helped to identify the gene mutations responsible for many rare diseases.

At a 1978 genetics conference in Montana, Philip Pallister, then the clinical director of the Boulder River School and Hospital, asked medical geneticist Judith Hall and a group of other researchers a rather startling question: Should we dig up a decomposing baby?

“This story is ghoulish,” Hall tells The Scientist.

Hall, then a researcher at the University of Washington, flew back home and returned to her work at Seattle Children’s Hospital. Her first day back, she saw an infant with the same features as the ones Pallister had described—an extra finger, a missing anal opening, and a similar-looking X-ray. Hall recalls wondering whether there was some sort of epidemic. The baby went into surgery to correct the anus but died on the operating table. This time, however, the medical team was allowed to perform an autopsy, and it revealed a huge tumor in the baby’s brain, pressing on the pituitary gland. 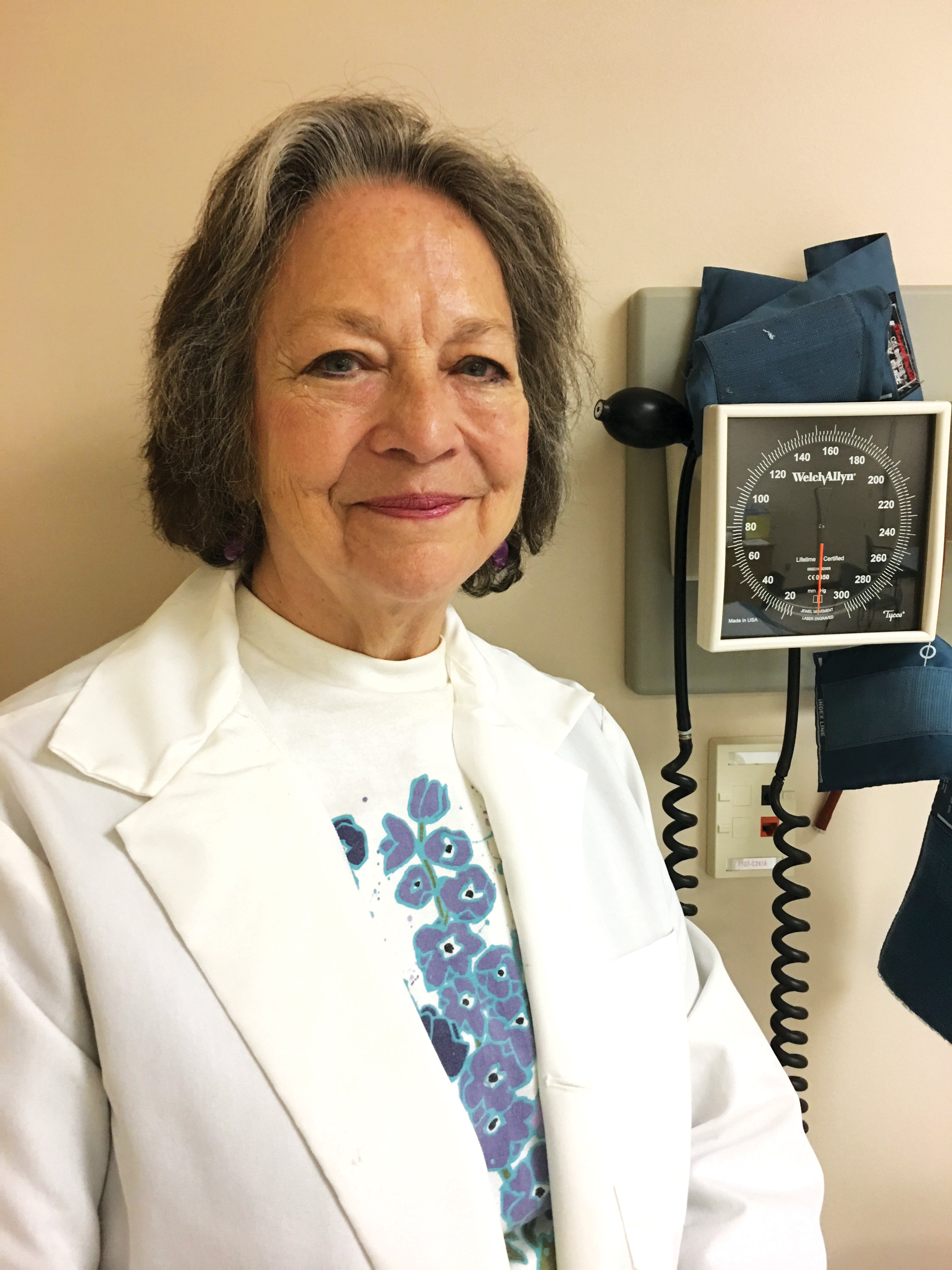 “The pituitary gland responds to stress and is partly responsible for production of cortisol. The cortisol literally helps keep you alive, and the lack of the hormone likely contributed to the baby’s inability to get through the surgery,” Hall says.

Despite the tragic outcome, the baby’s autopsy led Hall to guess that the other child that didn’t have the autopsy might also have had a similar tumor in the brain. She called Pallister and told him that she thought they should dig up and examine the baby that he had described at the conference. After receiving permission from the child’s parents and the police, the baby was exhumed. During the examination, the team found that the mortician had wrapped the baby in a formaldehyde-soaked cloth and because the baby had never eaten, it was not decomposed at all. “It’s the anaerobic bacteria in the gut that decompose bodies, and this infant turned out to be fully preserved,” Hall says. Also fully preserved: a brain tumor close to the pituitary gland.

Over the next six months, Pallister, Hall, and their collaborators identified an additional four cases of the mysterious syndrome, all seemingly without a genetic cause. The team published their findings in 1980. It took another 16 years before medical geneticist Leslie Biesecker and colleagues connected autosomal dominant mutations in the GLI3 gene, which plays a role in embryo development, including formation of the digits and the brain, to Pallister and Hall’s cases. The research would come to characterize Hall’s career, and similar approaches to mysterious cases would help her describe other novel disorders.

“It was an incredible saga. I mean, who digs up a baby that has been buried?” says Hall, now a professor emerita of pediatrics and medical genetics at the University of British Columbia in Canada. “But, if you are curious and want to get to the bottom of things and want to do that for the families that are affected, sometimes you go to rather unusual lengths.”

Hall was born in Boston in 1939. She was part of a family of seven—including an older and younger brother and two younger sisters—and remembers making soap, rationing food, and eating meat on Sundays only during World War II. Later, the family moved to Manchester, New Hampshire, where Hall says she played outdoors, built forts, and collected flowers and bugs. Hall’s mother, Louise, had infused Hall with this interest in the natural world, encouraging Judith and her siblings to study plants, insects, and birds. “There was total wilderness around. We would roam and collect specimens outside,” Hall recalls.

Hall did well in her high school classes and entered Wellesley College in Massachusetts in 1957, choosing a science-heavy curriculum. Genetics was still relatively new at the time—many scientists still presumed that there were 48, not 46, human chromosomes—but Hall’s zoology professor was tracking developments in modern biology and taught Hall and other students about new discoveries as they emerged, including the confirmation that the human genome did in fact have 46 chromosomes. The professor also introduced Hall to medical genetics, which Hall chose to focus on when she entered medical school at the University of Washington in 1961.

There, Arno Motulsky had recently established the school’s Division of Medical Genetics—one of the first such departments in the country—and was offering a course on the topic. Hall was the only student who signed up, so she received personal tutorials from Motulsky. “My medical training was always tied to genetics,” Hall says. “I grew up with genetics, you could say.”

After completing her degree, Hall stayed an extra year in Motulsky’s lab so that she could continue her experiments growing adult bone marrow cells in culture under low-oxygen conditions. She wanted to test whether such hypoxic environments could cause the cells to express fetal hemoglobin in addition to or instead of adult hemoglobin. The project was an attempt to understand the switch from fetal to adult hemoglobin, which occurs around the time of birth, and whether the wild type fetal gene copy could be turned on in individuals with mutated adult hemoglobin, including those with sickle cell anemia. (See “In Our Blood,” The Scientist, July/August 2019.) In her first publication, which appeared in Nature in 1968, Hall found that under low-oxygen conditions, more fetal hemoglobin was indeed expressed in cell cultures.

My medical training was always tied to genetics. I grew up with genetics, you could say.

The result got Hall thinking about the multitude of changes that occur during development, as well as the importance of tracking the course of a disorder from its onset—what medical geneticists call a disease’s natural history. “Medical geneticists are usually doing three things at once: trying to make the very specific genetic diagnosis, thinking about possible prevention and therapies, and at the same time trying to find the basic mechanism and learn about the natural history of the disorder so they can share all of that with the family,” Hall says. “This last part is the clinician-scientist part that is so interesting to me.”

After medical school, Hall moved with her husband, Phillip, to Maryland to begin a one-year internship in pediatrics at Baltimore City Hospital in 1966. Around the same time, the couple’s first daughter was born, and Hall would go on to have another daughter and a son. “I learned so much by becoming a mother,” she says. “I began to understand how parents feel about their children, the hormonal responses during pregnancy and when you’re a new mother, and how to talk to families, and also experiencing your child go[ing] through their developmental stages. It was a real insight into pregnancy and the maternal experience.”

After her internship at the hospital ended, Hall stayed in Baltimore, first doing an internship in medicine and pediatrics, followed by a fellowship in medical genetics, a residency in pediatrics, and then a fellowship in pediatric endocrinology, all at Johns Hopkins University. She chose Hopkins specifically to train with Victor McKusick, who established the first medical genetics clinic at the university. He was involved in defining birth defects, and during her fellowship, Hall focused on dwarfism. She began to collect familial cases that helped sort out common forms of dwarfism and whether these disorders are inherited in a dominant, recessive, or X-linked fashion. During that time she also described a new disorder in which patients had no radius—a bone in the forearm—and a blood platelet deficiency. After observing 13 cases in the clinic and identifying 27 additional cases in the literature, Hall and her colleagues named the disorder thrombocytopenia with absent radius.

In 1972, Hall accepted an assistant professor position in the division of medical genetics at the University of Washington School of Medicine. She began to document a wide spectrum of genetic disorders. This was the time when she worked on the cases of the babies with the brain tumors, extra fingers, and affected anuses, a condition that became known as Pallister-Hallsyndrome. The clinic, Hall says, was her laboratory, where she would document cases of rare diseases and identify patterns that helped identify  new syndromes or syndrome subcategories. She credits the families she has worked with for helping her answer questions about their children’s disorders. “I have never known a family that didn’t want to help understand their child’s condition and was not curious to meet other families with similar experiences,” she says. “They ask the best questions and challenge you because they are the ones living with the disorders on a daily basis.”

I won’t stop being interested in genetics. It’s such an exciting time with new studies on transgenerational effects of genetics and epigenetics and new ways to identify genes involved in disorders.

In 1981, Hall moved to the University of British Columbia, and over the next three decades, she developed and published on the tools, such as photography, necessary to document abnormal physical features. She described how to characterize behaviors associated with genetic disorders and explained how to document the natural history of genetic disorders that included congenital, physical features. In the clinic, Hall identified families affected by genetic disorders, then collected and shared data with laboratory geneticists, who would sometimes succeed in identifying the genes responsible. In 1989, she and colleagues also published a clinical handbook on normal physical measurements to facilitate clinicians’ diagnoses of patients with abnormal features.

“[The crux of my work] is meticulously identifying the features of a disorder and thinking about how the body works and how these features will evolve as the child grows,” says Hall.

Disorders that Hall played a leading role in identifying and characterizing include achondroplasia, a bone growth disorder that causes disproportionate short stature; Turner syndrome, a female-specific short stature syndrome that is accompanied by early loss of ovarian function; and Noonan syndrome, which includes symptoms such as unusual facial features, short stature, and heart defects. However, the group of disorders that Hall has devoted the most time to—what she calls her “favorite”—are collectively known as arthrogryposis and characterized by some joints being contracted, resulting in stiffness and immobilization of the joints and overall muscle weakness. She has published more than 100 articles on arthrogryposis and helped to map the chromosomal loci and biochemical pathways that are dysregulated in this group of disorders. Five years ago, she put together two reviews describing arthrogryposis cases accumulated over 40 years. The goal of the articles was to provide information to better diagnose the disorders.

Hall, now 80, is still hard at work. She no longer frequents the clinic, nor is she a salaried employee at the university. But she continues to pore over data that she has collected and to write research articles. Currently, she is working on a paper that tabulates all of the known genes (about 410 so far) that can cause arthrogryposis.

“I won’t stop being interested in genetics. It’s such an exciting time with new studies on transgenerational effects of genetics and epigenetics and new ways to identify genes involved in disorders,” she says. “I can’t imagine not being involved.”

Anna Azvolinsky is an independent New York City-based science and health journalist. Follow her on Twitter at @annaazvolinsky and read her work at https://annaazvolinsky.com/.