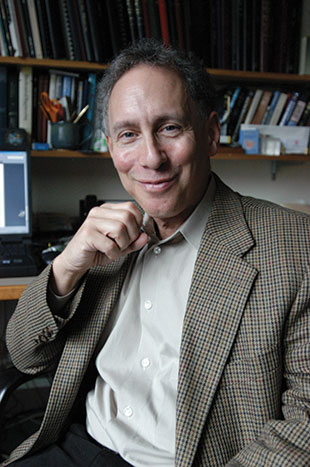 When we meet for our arranged interview in the bridal suite of a regal northern Kyoto hotel last November, Langer is asking those in the room for the e-mail address of another journalist he’d just spoken with: he wants to send her the link to an article they had discussed on the first patient being treated in Arizona as part of a clinical trial evaluating a biocompatible polymer-based device for spinal-cord injury. He’s in town to accept the 2014 Kyoto Prize in Advanced Technology, in recognition of his achievements in drug delivery and regenerative medicine. This prize is the latest in a string of awards he has collected over a more-than-40-year career in biomedical research.

In addition to these honors, Langer, one of only 11 Institute...

“Science isn’t a straight line. You start down a path, but you don’t know where it’s going to go.”

But before he secured his first patent, landed a substantial grant, or launched his now more than 80-strong lab, Langer—a chemical engineer by training—struggled to find his footing in the biomedical research world.

Chemistry conundrum. Born and raised in Albany, New York, Langer excelled at math during high school. He earned a bachelor’s degree in chemical engineering from Cornell University and, later, a doctorate in the same discipline from MIT. Completing his graduate studies during the end of the 1973 US oil crisis, Langer recalls having received “20 job offers from oil companies—four from Exxon alone.” Traveling home from an interview with Exxon in Baton Rouge, however, Langer resolved to return to academia; he was eager to put his problem-solving skills to work helping people, and, to him, biomedicine offered the most direct route. Barry Bunow, a former mentor of Langer at MIT, suggested that he contact Judah Folkman at Harvard Medical School, noting that Folkman “sometimes hired unusual people.”

Folkman, who had reported three years earlier that tumors needed to grow their own blood vessels in order to survive, did hire Langer as a postdoc in 1974, making him the first chemical engineer to join the lab’s search for compounds that inhibit angiogenesis.

“I was struggling tremendously to learn, reading all these papers in the Journal of Biological Chemistry, biology and medical journals, and probably understanding 10 percent. Then I’d go to the lab and do stuff, and that was hard, too. So I was sort of going back and forth between reading and doing experiments. It was very difficult. It took me a long time.”

First big break. While working in Folkman’s lab, Langer isolated a key angiogenesis inhibition factor and began developing biomaterials that would inform much of his future research. He established his own lab at MIT in 1978. Among other things, Langer’s group pioneered the synthesis of polymers for the sustained release of therapeutic proteins and other macromolecules.

Patent problems. Securing intellectual-property rights for these materials and methods proved challenging. After a US Patent and Trademark Office (USPTO) patent examiner rejected various versions of Langer’s first application five times, his patent attorney advised him not to file again. Not one to give up so easily, Langer ran a citation search, pulling up a 1979 Advances in Polymer Science paper that referenced his own biomaterial synthesis work, noting its novelty. After submitting this paper to the USPTO patent examiner, Langer was asked to secure written affidavits from all five coauthors on the Advances in Polymer Science paper. Finally, with the five polymer scientists swearing by their published word, Langer obtained a broad patent covering his biomaterials approach in 1983. Four years later, he launched his first startup, Enzytech.

Startup upstart. Early on in his career, Langer received criticism from his scholarly colleagues. “Some people felt that getting involved with companies was almost ‘dirty.’ That, in a more pure view of science, you wouldn’t interact with companies. You might hear that if you’re an academic, you should be purely academic. There are still probably some people who feel that way, [but] I think that is changing.”

Funding travails. Meanwhile, securing support for his research from the National Institutes of Health (NIH) and other agencies was another major challenge. Langer’s first nine NIH grant applications—filed during the late ’70s and early ’80s—were flat-out rejected. Comments on one of his earliest NIH reviews concluded that, as a chemical engineer, Langer didn’t “know anything about biology—[and] even less about cancer,” he recalls. With the help of his graduate students and postdocs, Langer eventually disproved each of the criticisms behind the reviewers’ rejections. “It’s a good example of just knocking one thing off after the next,” he says. “[This applies] to all different scientific challenges.”

“Science is not easy,” says Langer. “You put your head down and keep trying.”

Ferreting out funding. Langer stresses thinking creatively about how to generate financial support for nontraditional projects. “There’s often money in very unusual places. Start looking in unusual places. Only going to the NIH . . . is limiting.” He suggests seeking out private funds from both industry and philanthropic organizations as well as public grants.

Langer at the Lectern

Alternative approaches. Sharing knowledge appealed to Langer early on. He was a teaching assistant as an undergrad at Cornell, and during his graduate training at MIT, he helped establish novel math and science curricula for a Boston-area alternative high school called The Group School. “When you see somebody who wants to learn something but is struggling, and you figure out how to help them . . . it’s not just that they’ve learned it, that they have some [new] knowledge, but it also improves their self-confidence in a way. And sometimes, changes their lives. It’s almost hard to articulate. [Teaching] gives me an enormous feeling of satisfaction.”

Several years ago, after delivering a lecture to incoming MIT freshmen, Langer recalls being approached by a new student, the child of a former Group School student, who said: “My dad said to say hello. We live in Alaska and he remembers how you taught him and got him a [summer] job [at MIT].”

An extended family. To date, Langer has trained more than 900 scientists, many of whom have gone on to establish their own labs around the world. Kyoto University’s Yasuhiko Tabata is one of them. Tabata, whose lab focuses on tissue engineering, worked in the Langer lab 25 years ago. “My ideas of how to organize my group and success in scientific collaboration with academia and private industry are undoubtedly founded on lessons obtained from [Langer],” says Tabata. “It’s not about writing papers, not about obtaining patents,” he continues. “It’s all about helping patients.”

Back to basics. “Basic research is important. Science isn’t a straight line. Even if I look at the things we’ve done, they’re still [based on] basic chemistry and engineering research. Even the angiogenesis work: when we started on that, nobody would have predicted all [our results] on controlled release, biomaterials . . . that just happened because I was trying to solve a different problem. That’s how research works: you start down a path, and you try to be creative and curious and figure things out, but you don’t know where it’s going to go.”

Getting the word out. “The media can reach so many more people than I can. And I just really believe in the good that science can do. So if the media wants to talk to me, I do it. . . . It’s an opportunity for me to educate them. If I sense a story may be negative about science or scientists, I may not be able to change the focus of the story, but I will try. Since I believe in the good of science, I want the media to get that across, because I realize it will affect young people, and I’d much rather have a young person decide that they want to go into science than, say, investment banking. . . . That’s my personal prejudice, but I believe that. Whatever number of people I could reach in a lecture, the media will multiply that by 10, or 100, or 1,000.”

Langer Outside the Lab

Scientist spouse. Langer met his wife, Laura, at MIT in 1984.  She was the roommate of one of his postdoctoral associates, and at the time completing her own MIT PhD in neuroscience. They married in 1989. “She gets it. She knows the pressures I feel and the rewards I get from science.” The Langers have three children. “[I have] a very complete and really a wonderful life being a husband, father, and scientist.”

Cambridge culture. “When I was a graduate student at MIT in the 1970s, Kendall Square was almost a slum. There were no hotels, there was one submarine shop, one restaurant—you wouldn’t really want to go out late at night. Today, there are many, many hotels and The Boston Globe [recently] did an article on the 50 greatest restaurants in the Boston area—seven of them were within five blocks of my lab. And it just gets better. There are many, many companies. It’s a real hub for young people and jobs. Nothing better than seeing lots of happy people doing lots of great things.” 