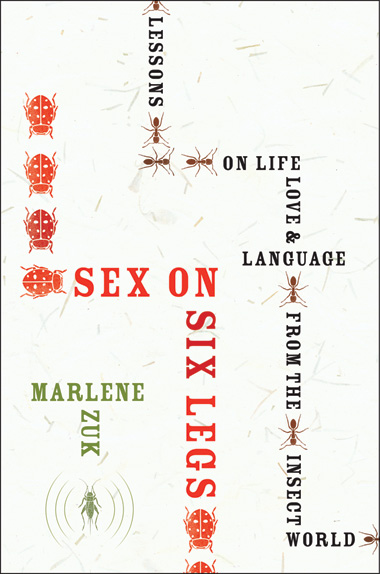 Insects do much of what people do: they meet, mate, fight, and part with what resembles love or animosity. Beetles care for their young and wasps engage in horrific battles. Yet they do these things in stunningly different ways from humans, accomplishing similar goals without any of the same means, lacking vertebrates’ large brains and a complex system of hormonal signals.

That insects don’t need a big brain to do big things forces us to think harder about what is required to evolve complex behavior. Going beyond the simplistic view of insect life in human terms is at the heart of my new book, Sex on Six Legs.  We can’t take the easy way out and assume that a dragonfly is jealous of a rival or that a mother earwig is sad when her offspring leave the nest.

Though many fables depict them as industrious and cooperative, ants have a dark side. A handful of species exhibit behavior that is strikingly similar to that of human enslavers: one type of ant will raid the colony of another species and steal its larvae and pupae, rearing them and consigning them to a lifetime of forced labor in the raiders’ nest. These ants have attracted a great deal of human attention; nineteenth-century observers were fascinated with slave-making ants, and made overt analogies to the human slave trade.

But should we be calling the practice “slavery” at all? Joan Herbers, a scientist at Ohio State University, has questioned the wisdom and accuracy of the name, given its obvious connotations. At public lectures, she often is asked about the parallel between ant and human slavery, a parallel she decries. She urges abandoning the metaphor and terminology entirely, because of its emotionally loaded overtones. “How,” she writes, “can we (overwhelmingly white) scientists casually talk about slave-making ants, with implicit messages of power, inequity, and subjugation, without recognizing that our very language is a powerful deterrent to recruiting descendants of slaves to appreciate our scientific work?”

Reaction to Herbers’s objections has been lukewarm at best among biologists, although many recognize the social biases she identifies. Some deplore the encroachment of political correctness; one commentator said, “Using the word ‘slave’ doesn’t condone slavery. A word is just a word.”

Another problem with dubbing the raiding ants “slave-makers,” however, is that it gives an incorrect view of the ants’ behavior, which is actually more akin to a kind of parasitism, with the so-called slave makers acting more like exceptionally free-roaming tapeworms. The survival of the “enslavers” depends upon another organism. But instead of traveling passively from one hapless victim to another, as some parasites do, the slave-making ants take matters into their own six legs.

Viewing the interaction as parasitic not only sidesteps the terminology melodrama, it opens up other interesting questions. Herbers and her colleagues have examined variation in raiding ant species and the species they exploit. Borrowing language from pathology, the researchers categorize the “virulence” of different raiding species. Just as anthrax is more virulent than athlete’s foot, a more virulent ant parasite kills a larger proportion of the adult ants at the nest it raids.

Herbers also found that the interaction between victim and parasite was different in different places, with the enslaved ant colonies in some locations behaving more aggressively towards the initial scouts sent out by the raiding parties.

The idea that the victims could defend themselves against the raiders wasn’t given much credence until recently, and it’s tempting to speculate that this lack of understanding sprang from people clinging too tightly to the slavery analogy. Slave rebellions are risky and rare, but it’s commonplace to imagine a parasite, like a worm inside the gut, and its target continually evolving ways to attack or defend against each other.

Of course, considering slave making as a form of parasitism gives rise to the unsettling thought that, by the same token, we are a kind of slave to our own pathogens. But that is a concern for another day.

Marlene Zuk is a professor of biology at the University of California, Riverside, where she studies the evolution of mating behavior and communication in a variety of animals, mostly (but not exclusively) insects. Read an excerpt of Sex on Six Legs.