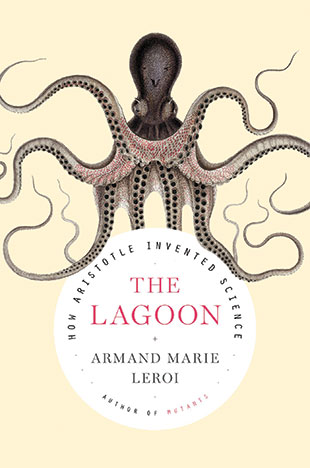 VIKING ADULT, SEPTEMBER 2014In the Aegean Sea there is an island called Lesbos. It has pine-forested mountains, glades of chestnut trees, and valleys filled with blooming rhododendrons. Terrapins and eels navigate the rivers. In the spring and autumn, migrating birds pause there in the thousands as they travel between Africa and Europe.

And there is the Lagoon. Twenty-two kilometers long, 10 wide, Kolpos Kallonis nearly cuts the island in two. The richest body of water in the Aegean, it is famous for its pilchards, which are best eaten raw, washed down with ouzo. I first went to the Lagoon more than 10 years ago, but have returned many times since. I have done so because it was on its shores that my science—biology—was born.

Around 345 BC, Aristotle left Athens, where for 20 years he had studied and taught at Plato’s Academy. He traveled east, across the...

Aristotle’s philosophical works, such as Metaphysics, Politics, Poetics, and his logical treatises loom over the history of Western thought like a mountain range. But he devoted nearly a third of his writings—a dozen volumes, thousands of pages—to living things. There is comparative zoology in Historia animalium, functional anatomy in The Parts of Animals, a book on growth, two on animal locomotion, and two on aging and death. There were books on plants, too, but they have been lost.

And then there is his greatest work of all. The Generation of Animals described how animals develop in the egg and womb and outlined a theory of inheritance. It was the best one around until the day, 2,300 years later, when Gregor Mendel published his “Experiments on Plant Hybridization.” Aristotle underpinned his biology with a physical and chemical theory and a scientific method that lies atop metaphysical bedrock. There’s a sense in which his entire philosophy was constructed in order to study living things.

Aristotle’s books are lecture notes for an epic biology course. They’re a hard read: terse and riddled with unfamiliar terms. He talks of the “soul” and you think of some mystical, immaterial substance that survives our mortal frames. But that’s Aquinas’s soul, not Aristotle’s: his soul is pure physiology. It’s the system that keeps us, and every living thing, alive. Taken together, I think that Aristotle’s biology is the greatest scientific edifice ever built by a single man. I’ll allow one challenger. And that is only because Charles Darwin gave us the idea that eluded Aristotle: evolution.

Aristotle’s biology is all but forgotten. It was the principal casualty of the Scientific Revolution. He was the giant who had to be slain so that we could pass through the gates of philosophy to reach the green fields of science that lay beyond. And yet, if, as a biologist, you read him, you realize how familiar it all seems—how so many of our ideas were first his.

But that’s no reason to read him. True, Max Delbrück said that Aristotle deserved a Nobel for having the idea of DNA—but that was just an affectionate joke. No, we should read him not for his science but for his example. He shows us how to transcend the ideas and theories that constrain our thoughts. He went down to the Lagoon’s shore, picked up a snail, and asked, “What’s inside?” It’s such a simple question, but it launched a science vast and beautiful. And that is what Aristotle gives us: the courage to seek and discover new worlds. 

Armand Marie Leroi is a professor of evolutionary developmental biology at Imperial College London. Read an excerpt of The Lagoon: How Aristotle Invented Science.