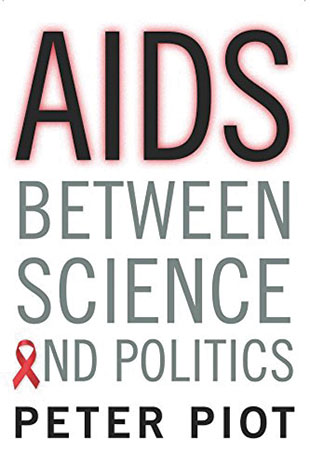 COLUMBIA UNIVERSITY PRESS, APRIL 2015\The emergence of AIDS in the 1980s sparked one of the most disruptive events in modern times. The pandemic has not only killed millions worldwide, but it has also profoundly altered our approach to sexuality, doctor-patient relations, the influence of civil society in international relations, and northern hemisphere/southern hemisphere solidarity. It thrust health firmly to the fore of national and international politics, where it so rightly belongs.

In AIDS: Between Science and Politics I had the unique opportunity to reflect on my experience as a scientist-clinician, as founding executive director of the Joint United Nations Programme on HIV/AIDS (UNAIDS), and as an activist involved in the struggle against HIV/AIDS since the epidemic began. The book explains my fundamental belief that without political or economic relevance, science can bring little to people. Conversely, without scientific evidence and a respect for human rights, politics is ineffective...

The first years of the AIDS epidemic were marked by the cruel stigmatization of those living with the disease (something that still exists today, albeit in sometimes subtler forms). But a powerful advocacy movement succeeded in slowly dispelling a fearful, reactionary, and often hateful perception of the disease. The AIDS movement changed the face of public health. It applied pressure to the scientific and political communities to do more, and it deepened our notions of security and human development as related to health.

Much of our progress is due to scientific discovery and treatment innovation, with the introduction in 1996 of highly active antiretrovirals (ARVs) being the most spectacular game changer. It is not an exaggeration to compare this breakthrough with the discovery of penicillin opening the antibiotic age. ARVs changed the lives of millions of people living with HIV, as well as how the world perceived AIDS and the epidemic. HIV infection was no longer a death sentence, and there was hope that one day the epidemic could be stopped.

In spite of these scientific advances, the overwhelming majority of patients in developing countries had no access to new medications. HIV continued to spread seemingly unhindered across the world, and patients continued to die. An absence of political will, denial by leaders in the most affected countries, and a lack of funding all fuelled the mounting death toll, especially in sub-Saharan Africa.

International solidarity for AIDS prevention and treatment came late, but the creation of novel international institutions such as UNAIDS and the Global Fund to Fight AIDS, Tuberculosis and Malaria became models for tackling other global issues. Support for the global HIV/AIDS response has greatly expanded to include bilateral aid, foundations, and nongovernmental organizations (NGOs), together with some inspiring examples of political leadership. For the first time in 30 years the epidemic has receded significantly on several continents. Since 2001, new HIV infections have fallen by 38 percent, and more than 14 million people are now receiving treatment.

Leaders and legislators have recognized the exceptional character of the epidemic, and the political sphere is now engaged at multiple levels. The considerable cost of AIDS, its economic impact in the most affected countries, and activist pressure have spurred governments to act.

But we cannot claim victory over this disease; every day nearly 7,000 people are newly infected with HIV, and about 5,000 people die from AIDS-related illnesses. Relating the historic successes highlighted in my book should encourage a redoubled effort at AIDS prevention, treatment, and research, and a long-term increase in funding. Over the past three decades, the HIV/AIDS movement has been able to overcome what seemed to be insurmountable obstacles. It still has the energy and creativity to take on new challenges in the fight against what remains one of the greatest public-health tragedies of modern times.

Peter Piot is the director of the London School of Hygiene & Tropical Medicine. He is a former Under-Secretary-General of the United Nations, the founding executive director of UNAIDS, codiscoverer of the Ebola virus, and former president of the International AIDS Society. Read an excerpt from AIDS: Between Science and Politics at www.the-scientist.com.