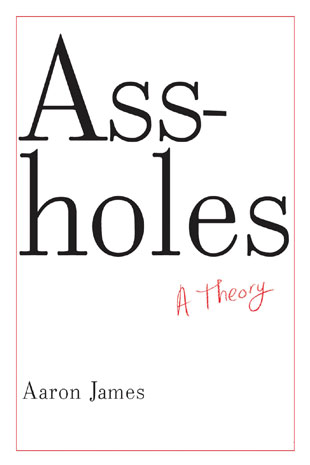 DOUBLEDAY, OCTOBER 2012What is it for someone to be an asshole? The answer is not obvious, despite the fact that we are often personally stuck dealing with people for whom there is no better name. Assholes can be found not simply in history and high public office but almost anywhere—at work; in our chosen club, sport; school; religious group; circle of friends; and even, for the truly unlucky, in the home or immediate family. Try as we might to avoid them, we often simply have to manage encounters that come, for most of us, with great difficulty and personal strain. The asshole is not just another annoying person but a deeply bothersome person—bothersome enough to trigger feelings of powerlessness, fear, or rage. To make matters worse, we may be unable to understand why exactly someone should be so disturbing. We may feel certain only that “asshole” is a...

While most of us could use advice in asshole management, we cannot get far without an answer to our initial question: What is it for someone to be an asshole? If nothing else, a good answer—a good theory of the asshole—would be intellectually interesting. It would give us the concepts to finally think or say why some people disturb us so. That, in turn, would ideally open a window into deeper aspects of morality and social life. We would see what assholes reveal about the human social condition and why assholes are everywhere, in every society. Ideally, a good theory would be practically useful. Understanding the asshole we are stuck with might help us think constructively about how best to handle him. We might get a better sense of when the asshole is best resisted and when he is best ignored—a better sense of what is, and what is not, worth fighting for.

Our theory is simply this: a person counts as an asshole when, and only when, he systematically allows himself to enjoy special advantages in interpersonal relations out of an entrenched sense of entitlement that immunizes him against the complaints of other people. (Because assholes are by and large men, we use the masculine pronoun “he” advisedly. We will suggest that women can be assholes as well. For the time being, think of Ann Coulter. We consider the question of gender in detail in chapter 4. Our theory thus has three main parts. In interpersonal or cooperative relations, the asshole:

(1) allows himself to enjoy special advantages and does so systematically;

(2) does this out of an entrenched sense of entitlement; and

(3) is immunized by his sense of entitlement against the complaints of other people.

So, for example, the asshole is the person who habitually cuts in line. Or who frequently interrupts in a conversation. Or who weaves in and out of lanes in traffic. Or who persistently emphasizes another person’s faults. Or who is extremely sensitive to perceived slights while being oblivious to his crassness with others. An insensitive person—a mere “jerk”—might allow himself to so enjoy special advantages in such interpersonal relations. What distinguishes the asshole is the way he acts, the reasons that motivate him to act in an abusive and arrogant way. The asshole acts out of a firm sense that he is special, that the normal rules of conduct do not apply to him. He may not deliberately exploit interpersonal relations but simply remain willfully oblivious to normal expectations. Because the asshole sets himself apart from others, he feels entirely comfortable flouting accepted social conventions, almost as a way of life. Most important, he lives this way more or less out in the open. He stands unmoved when people indignantly glare or complain. He is “immunized” against anyone who speaks up, being quite confident that he has little need to respond to questions about whether the advantages he allows himself are acceptable and fair. Indeed, he will often himself feel indignant when questions about his conduct are raised. That, from his point of view, may show that he is not getting the respect he deserves.

Although our theory is a definition of the term “asshole,” we should emphasize that it is not necessarily a dictionary definition. It is not necessarily a claim about how the word “asshole” is commonly used in some linguistic group (e.g., speakers of English). The word is often used loosely and variously, and we aren’t suggesting that every competent speaker of English would agree with our proposal about what the word means. We aren’t even saying that a majority of speakers would agree, in a way that might be confirmed or undermined by opinion polls or psychological experiments. Instead, our approach is the one Socrates explains to Polus in Plato’s Gorgias, when he explains why the dispute between them does not depend on opinion polls (what they call “the company”). Polus asks, “But do you not think, Socrates, that you have been sufficiently refuted, when you say that which no human being will allow? Ask the company.” Socrates replies:

you must not ask me to count the suffrages of the company [ . . . ] I shall produce one witness only of the truth of my words, and he is the person with whom I am arguing; his suffrage I know how to take; but with the many I have nothing to do, and do not even address myself to them. May I ask then whether you will answer in turn and have your words put to the proof?

Our definition, in other words, is a constructive proposal. It tries to articulate what we ordinarily mean when we speak of “assholes” but ultimately stands or falls on whether it captures the importance assholes have for us—where the “us” is, in the first instance, you and me. I am proposing the definition in light of importance that assholes have for us. You decide whether you agree.