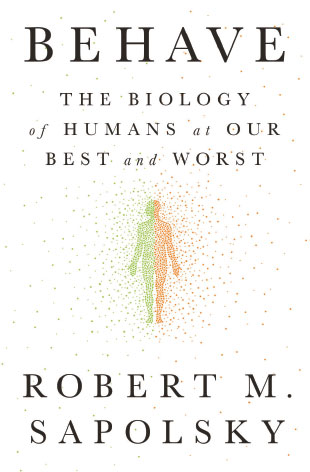 PENGUIN PRESS, MAY 2017The fantasy always runs like this: A team of us has fought our way into his secret bunker. Okay, it’s a fantasy, let’s go whole hog. I’ve single- handedly neutralized his elite guard and have burst into his bunker, my Browning machine gun at the ready. He lunges for his Luger; I knock it out of his hand. He lunges for the cyanide pill he keeps to commit suicide rather than be captured. I knock that out of his hand as well. He snarls in rage, attacks with otherworldly strength. We grapple; I manage to gain the upper hand and pin him down and handcuff him. “Adolf Hitler,” I announce, “I arrest you for crimes against humanity.”

And this is where the medal-of-honor version of the fantasy ends and the imagery darkens. What would I do with Hitler? The viscera become so raw that I switch...

I’ve had versions of this fantasy since I was a kid. Still do at times. And when I really immerse myself in it, my heart rate quickens, I flush, my fists clench. All those plans for Hitler, the most evil person in history, the soul most deserving of punishment. But there is a big problem. I don’t believe in souls or evil, think that the word “wicked” is most pertinent to a musical, and doubt that punishment should be relevant to criminal justice.

But there’s a problem with that, in turn— I sure feel like some people should be put to death, yet I oppose the death penalty. I’ve enjoyed plenty of violent, schlocky movies, despite being in favor of strict gun control. And I sure had fun when, at some kid’s birthday party and against various unformed principles in my mind, I played laser tag, shooting at strangers from hiding places (fun, that is, until some pimply kid zapped me, like, a million times and then snickered at me, which made me feel insecure and unmanly). Yet at the same time, I know most of the lyrics to “Down by the Riverside” (“ain’t gonna study war no more”) plus when you’re supposed to clap your hands.

In other words, I have a confused array of feelings and thoughts about violence, aggression, and competition. Just like most humans.

To preach from an obvious soapbox, our species has problems with violence. We have the means to create thousands of mushroom clouds; shower heads and subway ventilation systems have carried poison gas, letters have carried anthrax, passenger planes have become weapons; mass rapes can constitute a military strategy; bombs go off in markets, schoolchildren with guns massacre other children; there are neighborhoods where everyone from pizza delivery guys to firefighters fears for their safety. And there are the subtler versions of violence—say, a childhood of growing up abused, or the effects on a minority people when the symbols of the majority shout domination and menace. We are always shadowed by the threat of other humans harming us.

The problem, though, is that violence doesn’t go on that list. Sometimes we have no problem with it at all.

This is a central point of this book—we don’t hate violence. We hate and fear the wrong kind of violence, violence in the wrong context. Because violence in the right context is different. We pay good money to watch it in a stadium, we teach our kids to fight back, we feel proud when, in creaky middle age, we manage a dirty hip- check in a weekend basketball game. Our conversations are filled with military metaphors— we rally the troops after our ideas get shot down. Our sports teams’ names celebrate violence— Warriors, Vikings, Lions, Tigers, and Bears. We even think this way about something as cerebral as chess—“Kasparov kept pressing for a murderous attack. Toward the end, Kasparov had to oppose threats of violence with more of the same.” We build theologies around violence, elect leaders who excel at it, and in the case of so many women, preferentially mate with champions of human combat. When it’s the “right” type of aggression, we love it.

It is the ambiguity of violence, that we can pull a trigger as an act of hideous aggression or of self- sacrificing love, that is so challenging. As a result, violence will always be a part of the human experience that is profoundly hard to understand.

This book explores the biology of violence, aggression, and competition—the behaviors and the impulses behind them, the acts of individuals, groups, and states, and when these are bad or good things. It is a book about the ways in which humans harm one another. But it is also a book about the ways in which people do the opposite. What does biology teach us about cooperation, affiliation, reconciliation, empathy, and altruism? The book has a number of personal roots. One is that, having had blessedly little personal exposure to violence in my life, the entire phenomenon scares the crap out of me. I think like an academic egghead, believing that if I write enough paragraphs about a scary subject, give enough lectures about it, it will give up and go away quietly. And if everyone took enough classes about the biology of violence and studied hard, we’d all be able to take a nap between the snoozing lion and lamb. Such is the delusional sense of efficacy of a professor.

Then there’s the other personal root for this book. I am by nature majorly pessimistic. Give me any topic and I’ll find a way in which things will fall apart. Or turn out wonderfully and somehow, because of that, be poignant and sad. It’s a pain in the butt, especially to people stuck around me. And when I had kids, I realized that I needed to get ahold of this tendency big time. So I looked for evidence that things weren’t quite that bad. I started small, practicing on them—don’t cry, a T. rex would never come and eat you; of course Nemo’s daddy will find him. And as I’ve learned more about the subject of this book, there’s been an unexpected realization—the realms of humans harming one another are neither universal nor inevitable, and we’re getting some scientific insights into how to avoid them. My pessimistic self has a hard time admitting this, but there is room for optimism.

Excerpted from Behave: The Biology of Humans at Our Best and Worst, by Robert Sapolsky.  Reprinted by arrangement with Penguin Press, a member of Penguin Group (USA) LLC, A Penguin Random House Company. Copyright © Robert Sapolsky, 2017.