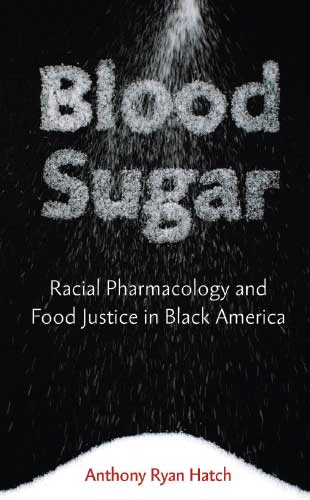 UNIVERSITY OF MINNESOTA PRESS, MARCH 2016One month after my sixteenth birthday in 1992, I was diagnosed with insulin-dependent (type 1) diabetes. For myself, and people with all types of diabetes, including type 2 diabetes and other forms of glucose intolerance, a diagnosis of diabetes means lifelong daily self-surveillance of blood sugar and the constant readjustment of treatment regimes, whether those regimes involve injecting synthetic forms of insulin, taking oral glucose-lowering agents, eating healthier foods, or exercising regularly. I often think about my life with diabetes as a kind of war, a conflict I fight on the terrain of my own biology with battlefronts along cellular walls, grocery store aisles, and the pharmacy checkout counter. My particular battle is with a biological marker called blood glucose, or blood sugar. Blood sugar is routinely measured in milligrams of glucose per diluted liter of blood plasma. Blood sugar is a universal biomarker...

When I was first diagnosed in 1992, the self-surveillance blood sugar monitor I owned took a full two minutes to compute my blood sugar; the monitor I now use takes a lightning-fast five seconds to tell me my ratio. Having checked my own blood sugar on average at least four times a day every day, I have monitored my own blood sugar more than thirty thousand times. If I live to be sixty-five years old, and assuming I continue to have health insurance and therefore subsidized access to blood glucose monitors and the expensive testing strips, I will have checked my blood sugar more than seventy thousand times. Each strip costs about one dollar (retail). The daily self-surveillance of blood sugar can (and should) be supplemented by the periodic assessment of glycated hemoglobin, a laboratory test that provides an estimate of average blood sugar control over a two- to three-month period. I have these tests conducted in my doctor’s office at least three times a year, although diabetics can now buy HbA1c testing kits at the pharmacy or the grocery store. Between 1995 and 2011, instead of taking multiple injections of insulin each day to keep my blood sugar within “normal” limits, I wore what is called an insulin infusion device (or insulin pump) that delivers insulin subcutaneously twenty-four hours a day, seven days a week, and more closely mimics the normal functionality of a human pancreas. Pump wearers accomplish this mimicry through increased self-surveillance and increased attention to blood sugar–insulin relationships. Also now available (from the Minimed Corporation and others) are blood glucose monitors and insulin pumps that can “speak to each other” via infrared technology: the blood sugar monitor sends the blood sugar reading over to the pump so that the pump wearer can more easily compute the necessary dosage of insulin.

Despite these advances in blood sugar monitoring technology and diabetes treatment, data from the Behavioral Risk Factor Surveillance Survey (BRFSS) from 2006 show that among people diagnosed with diabetes for whom daily self-monitoring is clinically necessary, 70.9 percent of African Americans, 66 percent of non-Hispanic whites, and 54.6 percent of Hispanic Americans checked their blood sugars on a daily basis. Accumulatively, these surveillance technologies are cost prohibitive, and in the current U.S. health-care system to accomplish diabetes self-regulation really means having access to adequate health insurance and prescription drug coverage. Unfortunately, for far too many Americans—indeed, for many people worldwide—access to basic health care, health insurance, and life-saving medicines is a dream long deferred.

The knowledge of blood sugar made available through biotechnology is life-saving information, especially for people on insulin therapy, or more broadly for people with all forms of diabetes. Paying close attention to my blood sugar and insulin relationships, and thereby engaging in moment-to-moment diabetes complication prevention, has become integrated into an endless cycle that defines my chances for a long, relatively complication-free life with diabetes. Access to these intimate knowledges about my own biological processes necessitates a particular set of social practices that are self-governing, although clearly not only in the negative, domineering sense. Multiple times each day I adjust my insulin regimens according to my blood sugar levels. Over a period of months, I try to use the knowledge of HbA to make more fundamental changes to my diabetes self-treatment, such as exercising more and eating healthier foods (low sugar, low fat, low cholesterol, high fiber). By more closely synchronizing insulin requirements to blood sugar values, I can achieve my strategic goal of effective diabetes management. These practices dominate my daily life, but they also instantiate a cycle of positively disciplined regulations that continue to make my life possible.

In addition to blood sugar, millions of Americans struggle to control a host of other biological markers of metabolic processes such as blood pressure, cholesterol, and weight, each of which has its own target of self-surveillance and regulation. I first heard about metabolic syndrome in March 2005. Metabolic syndrome is a statistical construction consisting of abnormal levels of metabolic biomarkers, which, if measured simultaneously in one body (called comorbidity), indicate real risks for the development of life-threatening metabolic health problems. To oversimplify, you have metabolic syndrome if you have high blood pressure, high cholesterol, high blood sugar, and elevated weight at the same time. As a graduate student in sociology, my first research plan was to examine the social and economic factors that contributed to this comorbidity (e.g., having diabetes, heart problems, and being overweight simultaneously) among older African American men. This plan involved conducting a statistical analysis of population level data that would have, I believed, permitted me to examine the causal pathways through which chronic illnesses developed across this particular population. In the context of this proposed study, I first came across the term “metabolic syndrome” in the biomedical research literature.

A split-image billboard placed in African American neighborhoods on one side shows soul singer Marvin Gaye on the cover of his famous What’s Goin’ On? album, but on the other side shows a bottle of Hennessey cognac with the subtitle “Never Blend In.” Sometimes sociology feels like this two-faced advertisement to me: for justice in theory, but undermining justice in practice. In August 2005, I experienced a revelation about inferential statistics, the methodological approach to social research that undergirds large swaths of research in sociology, public health, and indeed across the social, behavioral, and biomedical sciences. This was the analytic method I had chosen for my study of African American men facing risks of life-threating metabolic problems. Through decoupling the subjective experience of people from objective representations of reality, inferential statistics ultimately distorts the already imploded boundary of subject and object. As the harbinger of nomothetic universalism in sociology and other social and natural sciences, statistics consequentially obscures the machinations of social power. The critique of the synergies between bioscience, corporate global capitalism, and state power I offer in this book notwithstanding, I do not want to undercut statistics insofar as I destabilize the very epidemiological evidence needed to document the effects of institutionalized inequalities on people’s bodies. The epidemiological work on health inequalities, and the broader bodies of knowledge produced through the use of statistical research methods, do answer important questions about our social world. But they also frame too much scientific inquiry away from questions about the organization of social power, which is what I really wanted to investigate as being important to the health of people living in racially and economically stratified societies. As the result of the research that began with this revelation, Blood Sugar seeks to investigate the relationships between knowledge and power that made possible one particular product of inferential statistical analysis, the idea of metabolic syndrome.