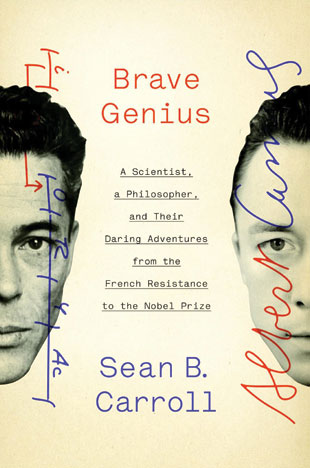 CROWN, SEPTEMBER 2013Monod and Camus hit it off right away. Camus wanted to hear about Monod’s experiences as a Communist during the war and what Monod had learned about Lysenko. Monod in turn learned that Camus had been devoting a great deal of study to the situation in the Soviet Union. The two former resistants discovered an immediate bond in their respective condemnation of Stalin’s regime. Their friendship was cemented over drinks and conversation at La Clo­serie des Lilas and other Left Bank watering holes.

Camus had reached a conclusion similar to Monod’s about the “mor­tal decay” of Socialist thought in the Soviet Union, but his verdict was based on different evidence. One catalyst for Camus’s decisive turn against Soviet- style Communism was his meeting the ex- Communist writer Arthur Koestler. Born in Hungary, Koestler lived in Vienna, Ber­lin, Palestine, and Paris between the wars. A Communist activist...

Koestler visited Paris in October 1946, and met Camus simply by walking into his office at Gallimard and introducing himself. Koestler tracked down Sartre the next day. He was welcomed immediately into the Camus–Sartre–de Beauvoir social circle. At the time, Camus was in the process of writing “Neither Victims nor Executioners” for Combat. Camus paid close attention to what Koestler had to say, espe­cially when he chided Camus for having been too lenient on the Soviet Union. Koestler’s break from his Communist past was complete. At a meeting with Sartre and others at André Malraux’s home, Camus carefully noted what was said among his famous friends. Koestler said that he hated the Stalin regime as much as he hated the Hitler regime, and for the same reasons. He had once lied for Stalin, he admitted, but now he was certain there was no hope for the regime. Koestler added, “It must be said that as writers we are guilty in the eyes of history if we do not denounce what deserves to be denounced. The conspiracy of silence is our condemnation in the eyes of those who come after us.”

Camus would not be silent. His encounter with Koestler hardened his conviction that Communism and Stalinism were the greatest im­mediate threats to peace in Europe— they were the new plague. In Camus’s view, Stalin was indeed akin to Hitler. The terror that he had unleashed on his own people was proof. His government was a dictatorship, not a Socialist state. With his “Neither Victims nor Ex­ecutioners” articles, Camus had taken an openly critical stance toward Communists, the Soviet Union, and their “ends justifies the means” mentality concerning violence.

And, like Monod, Camus had drawn the ire of Communists. By coincidence, they knew each other’s most prominent critics from the Resistance: Camus had met Louis Aragon in Lyon in 1943 in the course of making contact with various Resistance writers, and Camus’s critic Emmanuel d’Astier de la Vigerie attended the same summit of Resistance groups in Switzerland with Monod in late 1943. Aragon and d’Astier would each receive the International Lenin Prize from the USSR in 1957.

In 1948, d’Astier was the director of the newspaper Libération and a Communist deputy in the French National Assembly. He and Camus exchanged two rounds of mutual critiques following the reprinting of the “Neither Victims nor Executioners” series in Caliban magazine in November 1947. In two articles, the first in Caliban and the second in the pro- Soviet newspaper Action, d’Astier pounced on Camus for myriad sins. He wrote that Camus was being unrealistic in promoting a “third option” other than USSR Communism and American capi­talism, arguing that by rejecting the first, he was serving capitalism, which d’Astier linked to Fascism. He accused Camus of having aban­doned politics and taken refuge in morality. He asked Camus to clarify what he meant by the justification of violence in totalitarian regimes, and even why, given his convictions, he had taken the side of the Re­sistance during the war.

Camus was angry enough to take the time from his many projects (two plays and a book- length essay) to write two long ripostes. In his rebuttals, he pointed out that most of d’Astier’s criticisms were directed at him personally, as though he were a dangerous threat, and were sec­ondary to the real issues of neither legitimizing violence nor endorsing a revolution that would lead to a third world war. As for violence in to­talitarian regimes, Camus reminded d’Astier, “The camps were part of the apparatus of the State in Germany. They are part of the apparatus in Soviet Russia, as you cannot help but know . . . No reason in the world . . . can induce me to accept the existence of the concentration camps.” He also took exception to those Communist critics who had so often labeled him as the “son of the bourgeoisie” when in fact he was the son of a worker, raised in poverty. Camus hit back: “The majority among you communist intellectuals have no experience whatsoever in the proletariat’s condition, and you are in a poor position to treat us as dreamers ignorant of realities.”