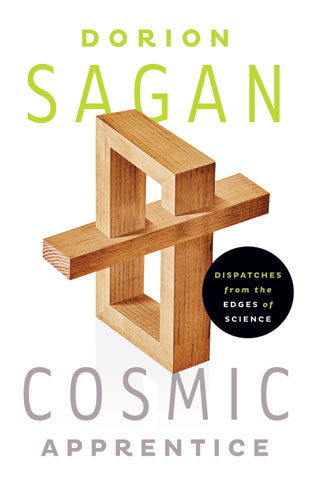 UNIVERSITY OF MINNESOTA PRESS, APRIL 2013Nature is not just red in tooth and claw but white with apatite, golden with chrysophyte algae, purple with photosynthetic plastids, and peachy orange with carotenoids eaten by long-legged filter-feeding flamingos, whose diet of shrimp and algae and cyanobacteria shows up under their skin. It is butterscotch gold with naturally archiving, insect-preserving amber, white with Beggiatoa bacteria, and black with the magnetic teeth of chitons. It is green with Chlorobium sulfur bacteria and red with Chromatium, a purple sulfur bacterium that, like its ancient metabolic brethren, oxidizes sulfide rather than water, yellow sulfur rather than oxygen as its photosynthetic waste. Nature is not just dog-eat-dog but bacteria-inside-archaeon, protest mingling with protist, a quorum-sensing swarm. There is more in it than we dreamed; it comes in colors and keeps on coming, psychedelically without pause or apology.

The night is black and the sky is...

Why is the sky blue, no-longer-jumping Jack asks. A correct answer would be cyanobacteria, the mean lean greens that give summer its verdant sheen. The sky would not be its beautiful aqua or azure, the oceans would not reflect the sky’s blue kiss without these germs. For the sky’s blueness, its tranquil aerial fields, comes from a surfeit of atoms of oxygen. Their minuteness is a right size to catch a light wavelength and send it spinning and scattering all directions every day. The short, blue wavelength light reflected by atoms hits our eyes. The early world may have seemed pale and ruddy, and smelled sulfurous and foul by comparison. Inhaling oxygen first released in any meaningful way into our atmosphere by slimy cyanobacteria, we can only say that life on Earth is, if it is, a gas, because these photosynthetic bacteria spread, about two billion years ago, like green wildfire. They directed the energy of light to break the molecular bonds of water, getting a metabolic pathway up on the purple sulfur bacteria that are otherwise much like them. They incorporated hydrogen into their cells and released reactive oxygen into the atmosphere, giving us something to think about, and breathe.

We live on a psychedelic planet where partners triumph, the chemistry of the early solar system lives on in our bodies, individuality appears at higher levels, and evolution evolves. Once upon a time, billions of years ago, Earth’s sky was not yet blue. This is because life liberated such oxygen atoms from the hydrogen molecules to which they were molecularly bonded. The size of oxygen atoms is such as to scatter light of a blue wavelength. The life form responsible for this release of oxygen atoms was cyanobacteria. Their forerunners were purple sulfur bacteria that had thrived on hydrogen sulfide. The new water-using cyanobacteria took their hydrogen directly from the liquid medium in which they lived. Breaking water’s molecular bonds was difficult, but it saved early life from perishing and led to a life form—a very successful life form—that is arguably the dominant form of life on Earth today. And they were nicely named, considering what they did: cyanobacteria, cyan denoting any of a range of colors in the blue-green range of the spectrum. These blue-green sunlovers became trapped in the ancestors of plant cells, inaugurating the eternal salad days land plants still enjoy. Language itself contains fossils, and thus it is that these beings are still more often referred to by their old name—“blue-green algae”—which tends to obscure what they are: bacteria, symbiotic aquatic oxygenators of a planet that, once upon a time, was a whiter shade of pale. It is an amazing story, all the more powerful for being both mythic and true: