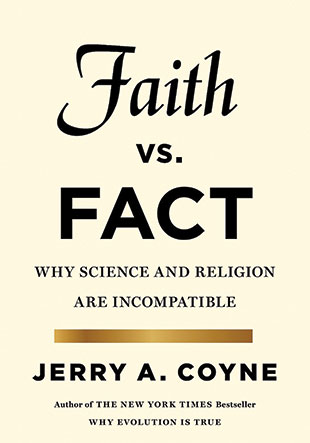 VIKING, MAY 2015There are no heated discussions about reconciling sport and religion, literature and religion, or business and religion; the important issue in today’s world is the harmony between science and religion. But why, of all human endeavors that we could compare with religion, are we so concerned with its harmony with science?

The answer, to me at least, seems obvious. Science and religion—unlike, say, business and religion—are competitors at discovering truths about nature. And science is the only field that has the ability to disprove the truth claims of religion, and has done so repeatedly (the creation stories of Genesis and other faiths, the Noachian flood, and the fictitious Exodus of the Jews from Egypt come to mind). Religion, on the other hand, has no ability to overturn the truths found by science. It is this competition, and the ability of science to erode the hegemony of...

One can in fact argue that science and religion have been at odds ever since science began to exist as a formal discipline in sixteenth-century Europe. Scientific advances, of course, began well before that—in ancient Greece, China, India, and the Middle East—but could conflict with religion in a public way only when religion assumed both the power and the dogma to control society. That had to wait until the rise of Christianity and Islam, and then until science produced results that called their claims into question.

And so in the last five hundred years there have been conflicts between science and faith—not continuous conflict, but occasional and famous moments of public hostility. The two most notable ones are Galileo’s squabble with the church and his sentence to lifetime house arrest in 1632 over his claim of a Sun-centered solar system, and the 1925 Scopes “Monkey Trial” involving a titanic clash between Clarence Darrow and William Jennings Bryan over whether a Tennessee high-school teacher could tell his students that humans had evolved (the jury ruled no). Although both of these incidents have been recast by accommodationist theologians and historians as not involving genuine conflict between science and religion—it’s always construed as “politics,” “power,” or “personal animosity”—the religious roots of these disputes are clear. But even setting these episodes aside, there are many times when churches decried or even slowed scientific advances, episodes recounted in the two books I’ll describe shortly. (Of course, churches sometimes promoted scientific advances as well: during the advent of smallpox vaccination, churches were on both sides of the issue, with some arguing that it was a social good, others that it was short-circuiting God’s power over life and death.)

But these episodes of conflict didn’t give rise to public discussion about the relationship of science and religion. That had to wait until the nineteenth century, and was probably ignited by Charles Darwin’s 1859 publication of On the Origin of Species. The greatest scripture-killer ever penned, the book demolished (not deliberately) an entire series of biblical claims by demonstrating that purely naturalistic processes—evolution and natural selection—could explain patterns in nature previously explainable only by invoking a Great Designer.

And so the modern discussion that science and religion are at odds, with science having the stronger weapons, began with two books published in the late nineteenth century. Historians of science see them as having launched the “conflict thesis”: the idea that religion and science are not only at war, but have been perpetually at war, with religious authorities opposing or suppressing science at every turn, and science struggling to free itself from the grip of faith. After recounting what they saw as historical clashes between the church and scientists, the authors of both books declared science the victor.

The pugnacity of these works, unusual for their time, was fully expressed in the first: History of the Conflict Between Religion and Science (1875) by the American polymath John William Draper:

Then has it in truth come to this, that Roman Christianity and Science are recognized by their respective adherents as being absolutely incompatible; they cannot exist together; one must yield to the other; mankind must make its choice—it cannot have both.

As the quote implies, Draper saw Catholicism, rather than religion as a whole, as the main enemy of science. This was because of that religion’s predominance, the elaborate nature of its dogma, and its attempt to enforce that dogma by civil power. Further, in the late eighteenth century, anti-Catholicism was a dominant strain among the American gentry.

A History of the Warfare of Science with Theology in Christendom, published in 1896, was longer, more scholarly, and more complex in both origin and intent. Its author, Andrew Dickson White, was another polymath—a historian, a diplomat, and an educator. He was also the first president of Cornell University in Ithaca, New York. When White and his benefactor, Ezra Cornell, organized the university in 1865, the state bill describing its mission required that the board of trustees not be dominated by members of any one religious sect, and that “persons of every religious denomination, or of no religious denomination, shall be equally eligible to all offices and appointments.” Such secularism was almost unique for that era.

White, a believer, argued that this plurality was actually intended to promote Christianity: “So far from wishing to injure Christianity, we [he and Cornell, who was a Quaker] both hoped to promote it; but we saw in the sectarian character of American colleges and universities, as a whole, a reason for the poverty of the advanced instruction then given in so many of them.” This was an explicit attempt to set up an American university on the European model, fostering free inquiry by eliminating religious dogma.

This plan backfired. The secular intent of White and Cornell angered many believers, who accused White of pushing Darwinism and atheism and promoting a curriculum too heavy on science. And they even allowed atheists on the faculty! (Some observers felt that every professor should be a pastor.) White’s attempt to try “sweet reasonableness” failed, and ultimately he came to view his struggle for university secularism—which he won—as one battle in a wider war between science and theology:

Then it was that there was borne in upon me a sense of the real difficulty—the antagonism between the theological and scientific view of the universe and of education in relation to it.

Excerpted from Faith Versus Fact: Why Science and Religion Are Incompatible by Jerry A. Coyne. Published in 2015 by Viking, an imprint of Penguin Publishing Group, a division of Penguin Random House LLC. © Jerry A. Coyne, 2015.