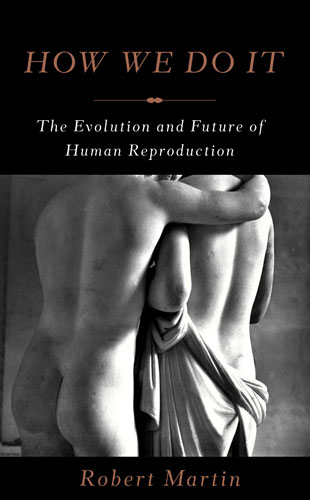 BASIC BOOKS, JUNE 2013Popular books have established the notion that human copulation has two unique features: It can take place at any time in the ovarian cycle, and it occurs even during pregnancy. On this basis, Desmond Morris described humans as the “sexiest” primate species. Yet both claims to uniqueness clash with abundant biological evidence.

We can quickly dismiss the claim that copulation during pregnancy is unique to humans. It is easy to understand how this myth originated. Copulation after conception seemingly serves no useful biological function, so it is tempting to assume that it never happens with other mammals. But it most certainly does. It is widespread in the animal kingdom, as has been known for more than a century. A rapid survey at once reveals that copulation during pregnancy has been seen in mammals as diverse as shrews, mice, hamsters, rabbits, pigs, cows, horses, and primates,...

The claim that humans are the only mammals that engage in copulation throughout the ovarian cycle has a little more justification. However, our distinctiveness has been overstated and misrepresented. The crucial point is that copulation can occur at times during the cycle when ovulation is unlikely to occur: namely, we have sex whenever we feel like it. Such out-of-phase copulation is rare to nonexistent among mammals other than primates. Although absent among prosimians (lemurs, lorises, tarsiers), it is widespread among simians (monkeys and apes). Indeed, almost all simians copulate over a substantial part of the ovarian cycle. Gorillas are one of the few exceptions, copulating for only a few days in each cycle, close to the time of ovulation. As a general rule, monkeys and apes mate for at least a week during the ovarian cycle, and in some species copulation can occur on almost any cycle day. Overall, copulation typically occurs more often during the phase of follicular growth leading up to ovulation than in the luteal phase following ovulation, in which a corpus luteum, or yellow body, is present.

Most female mammals mate only during a tightly restricted period of one to three days in each ovary cycle. A female may actively solicit copulation during this period, and in common parlance is said to be “in heat” if she shows obvious readiness to mate during her receptive phase. Reproductive biologist Walter Heape coined the term “estrus” in 1900, referring to a restricted and obvious period of female readiness. The term’s origin is quite curious—it comes from the Greek oistros, meaning “botfly.” The family Oestridae contains about 150 botfly species. Larvae of these parasitic flies develop in tissue of a mammal host. Heape’s connection between botflies and heat in female mammals was seemingly inspired by the fact that botflies can drive cattle into frenzy. Whatever his reason, the word “estrus” soon became the standard label for a limited period of mating readiness in female mammals.

Prosimian primates are like other mammals in that females typically have a limited period of estrus. By contrast, simians generally copulate over a large part of the ovarian cycle. Because of this, reproductive biologist Barry Keverne proposed in 1981 that we should avoid the term “estrus” for monkeys and apes. He was not merely quibbling over words. Substantial evidence indicates that in female simians direct hormonal control of mating readiness has decreased, while flexible control by the brain has increased. Unfortunately, Kerverne’s well-founded arguments—which since have been supported by many other experts—are often overlooked. Misleading references to “estrus” in monkeys and apes abound. This oversight explains why a vital point has been widely ignored: Extended copulation during the cycle is both widespread among monkeys and apes and largely unique to them and humans. The finding is not new. Reproductive physiologist Sydney Asdell, author of the encyclopedic Patterns of Mammalian Reproduction, noted this unusual pattern for rhesus macaques more than eighty years ago. It is true that humans represent an extreme condition, with frequent copulation across the ovarian cycle. But extended mating over the female cycle was probably already present in the common ancestor of monkeys, apes, and humans more than 40 million years ago.

For mammals that copulate during a limited time in each cycle, ovulation, the release of an egg from the ovary, takes place within that brief mating window. Tightly confined copulation is precisely what we would expect to evolve, as it guarantees that a fresh sperm fertilizes a fresh egg. Mammal sperms generally survive for about two days after ejaculation, and eggs typically less than a day. Therefore it is difficult to understand why a female mammal would mate at any time other than close to ovulation. If copulation does not coincide closely with ovulation, a timeworn sperm might fertilize a freshly ovulated egg, or a decaying egg might be fertilized by a freshly ejaculated sperm. Early experiments on mammals such as rabbits and rats showed that fertilization with timeworn sperms or eggs can lead to pregnancy loss or birth of defective offspring. Why, then, do monkeys, apes and humans copulate at times when fertilization with timeworn sex cells seems almost bound to happen? This crucial question, largely ignored, has profound medical implications, as we shall see in the final chapter.

Abundant evidence shows that ovulation occurs about halfway through the ovarian cycle in humans and many monkeys and apes, ranging from macaques, baboons, and langurs to chimpanzees. Thus any copulation a few days before or after midcycle could potentially cause problems. At best, copulation several days away from ovulation will simply be infertile. At worst, mating closer to ovulation, but not close enough, could lead to fertilization with a timeworn sperm or egg. Of course, monkeys, apes, and humans may have evolved a special mechanism to eliminate this potential problem. However, this assumption leads to another conundrum: Why would the ancestor of these simian primates lose an otherwise universal mechanism that ensures fertilization with fresh sex cells? If fertilization with timeworn sex cells leads to pregnancy loss and/or birth of defective offspring, strong selection should confine copulation to a brief window around ovulation. So how on earth could copulation outside the ovulation period ever evolve? Furthermore, there is another potential problem, which is that extended mating during the ovarian cycle, particularly if several males are involved, could increase any risk posed by germs borne on sperms.

Discussions of extended copulation during the ovarian cycle rarely mention possible dangers of fertilization with timeworn sex cells. Ignoring this issue, many scientists have proposed imaginative explanations for unrestricted mating. Anthropologist Nancy Burley linked extended copulation to “concealed ovulation.” This idea rests on a common assumption that a male cannot detect whether a female is ovulating unless she emits a clear signal of some kind. Three main hypotheses, which are not necessarily mutually exclusive, have been put forth. The first is that copulation over an extended period in the cycle strengthens the bond between partners. Desmond Morris championed this proposal in The Naked Ape. Anthropologists Lee Benshoof and Randy Thornhill began an influential 1979 paper on the evolution of monogamy and concealed ovulation in humans with the following words: “Homo sapiens is unique among primates in that it is the only group-living species in which monogamy is the major mating system and the only species in which females do not reveal their ovulation by estrus.” As a matter of fact, many primate species (approximately eighty) are monogamous, and ovulation is not revealed by estrus in most monkeys and apes. A second hypothesis proposes that extended female receptivity confuses paternity. If males cannot detect when ovulation occurs during a female’s extended mating period, the paternity of offspring is not obvious. Such a mechanism could reduce competition between males, with various social benefits. The third proposal is that extended copulation might reinforce male investment in offspring. Nancy Burley in fact suggested a fourth explanation specifically tailored for humans: Ovulation time is “concealed” from women themselves, preventing deliberate avoidance of conception.