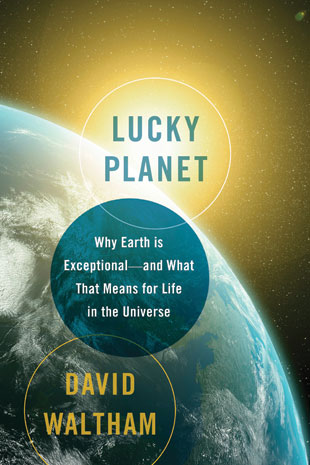 BASIC BOOKS, APRIL 2014Far beyond the range of any telescope humanity will ever possess lies the doomed planet Nemesis. Nemesis, a near-twin to our own world, is named after the ancient Greek goddess responsible for the rebalancing of undeserved good fortune. As befits this name, Nemesis has been on a lucky roll far longer than any world could reasonably expect, but her streak of good fortune has come to an end.

Nemesis is dying. The immense herds that once swarmed across her vast plains are gone forever. The huge beasts that swam her clear, blue ocean waters are now extinct, and the previously verdant rain forests of her equatorial regions have withered and died. A beautiful and complex biosphere has vanished, leaving bacteria and a few species of worm as meager representatives of the multifarious life-forms that once made Nemesis the biological pinnacle of her galaxy.

The first indications of trouble on Nemesis were subtle; storms became a little bigger, droughts slightly longer, and winters marginally colder. Animals and plants adapted to the changes and continued to prosper. Bit by bit, conditions worsened. During the most extreme periods, the entire planet switched from stiflingly hot desert to frigid polar wasteland and back every few hundred thousand years. The climate occasionally stabilized to give life a respite, but after a few tens of thousands of years, it became erratic once more and intolerable for many organisms. Eventually, plants could no longer evolve fast enough to keep up, and when the plants died so did the animals. Extinction outpaced species creation, and within a few million years of the start of the troubles, only the most robust organisms clung to life.

Earth, too, endured a dangerously variable climate at this time. Sulphur dioxide clouds, the result of intense volcanic eruptions, reflected sunlight into space to produce severely cold decades. When the clouds cleared, equally unforgiving hot periods followed, produced by greenhouse gases blasted into the air by those same volcanoes. And, just when it seemed that things could get no worse, earth was hit by an asteroid. The climatic consequences of this impact proved to be the final straw for millions of struggling species; many, including the dinosaurs, died out. Yet this is where earth’s fate finally diverged from that of Nemesis. The climate chaos calmed down, and earth’s biosphere began its slow journey back to full health. Our ecosystem took ten million years to recover, but new life-forms slowly emerged to repopulate a changed yet still-vibrant world; a world that went on to produce Homo sapiens sixty-five million years later.

How did two worlds enjoy billions of years of exuberant, parallel development and then eventually experience such dramatically different outcomes? There are many ways of getting a world wrong but few ways of getting it right. Nemesis stands for all the myriad failed worlds in the universe, just one example of how not to build a habitable planet. Yet her difference from our own world is tiny, as we’ll see in the pages of this book. In contrast, earth was blessed with incredible good fortune, giving it all the right properties to sustain a complex and beautiful biosphere. It may just be the luckiest planet in the visible universe.

Excerpted with permission from Lucky Planet: Why Earth is Exceptional—and What That Means for Life in the Universe, by David Waltham. Available from Basic Books, a member of The Perseus Books Group. Copyright © 2014.