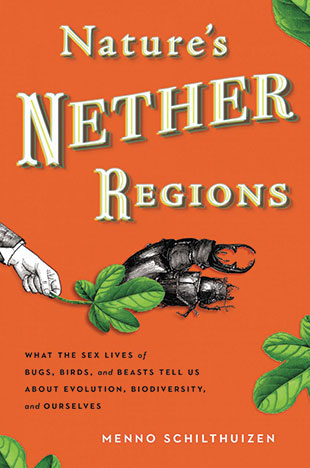 VIKING ADULT, MAY 2014Even more infamous is the traumatic insemination that is practiced by cimicids, blood-feeding bugs to which also Cimex lectularius, the common bedbug, belongs. Unforgettable to anyone who has ever been unlucky enough to spend several nights in bedbug-infested sleeping quarters, they will be truly memorable once you have learned about their sex lives. Living in densely packed colonies in crevices near the sleeping place of their “host,” sexual encounters are frequent, quick, and literally stabs in the dark. Bedbug researcher Mike Siva-Jothy of Sheffield University says: “When a female has not fed, she can avoid copulating males. But when’s fed and bloated, she’s a sitting duck. There’s no courtship—it’s brutal in every sense of the word.”

Males find their mates by a simple sit-and-wait strategy. Whenever anything resembling an engorged female lumbers past, a male bedbug will climb her right flank, push ahead until his...

In a way, such traumatic insemination is the ultimate insult to female cryptic choice. The male forgoes courtship, genital rubbing, and any negotiations of vagina, spermatheca, and other hurdles put in place by the female. Breaking all the rules of the genital game that we have come across in this book so far, he gets his way by crude copulatory treachery. And the females suffer the consequences. When a single female is housed with as many as twelve males, she is often dead within a day from the many wounds inflicted by her suitors’ penises. And even a single male can shorten a female’s life span considerably. Alastair Stutt, a student of Siva-Jothy’s, did experiments in which he let females mate either with regular males or with males in which he had rendered the penis harmless by sticking it to its belly with a droplet of superglue. He found that the females housed with these incapacitated males lived for more than four months, whereas the females that had to suffer functional males survived for only eleven weeks or so.

But all is not as it seems. Female bedbugs have evolved a complex system to cope with the worst effects of traumatic insemination. First of all, they carry a so-called spermalege. This amounts to a brand-new set of genitalia, developed in the site where the male normally impales her. In Cimex lectularius, this includes a slit-like organ, effectively a second vagina, on the right-hand side of her belly, and when the male adopts the copulatory position and launches his stylet-like penis into her flesh, his penis is usually guided into it. Underneath this pseudo-vagina lies a large organ, the mesospermalege, which has two functions. It receives the male’s ejaculate, guides the sperm cells into the blood, and sends them on their way toward her single ovary. It also has a sanitary role: the grimy conditions under which bedbugs live mean that a male’s pointed member is covered in harmful bacteria and fungi that it inoculates the female with as he inserts his penis into her. To deal with this, the mesospermalege houses a massive immune system that neutralizes most of these sexually transmitted diseases. Entomologists have done experiments by stabbing female bedbugs all over their bodies with infected replica bedbug penises. (Siva-Jothy: “There’s actually a guy in my lab whose pleasure it is to produce glass penises.”) They have discovered that when the females are jabbed into their spermalege, their lifetime egg output is not affected, but when they are stung in other parts of their body, they get so diseased that their offspring production is much less.

In a different kind of bedbug, Stricticimex (“batbug” would be a better term for them, since they feed on the blood of bats in caves), the mesospermalege has evolved into such a complex system that traumatic insemination effectively has become regular insemination again: rather than traveling like unguided missiles through the female body, the sperm, after having been squirted into the tissue underneath the pseudo-vagina, are directed via a set of tubes and storage chambers to the ovaries, and the female in fact regains full control of her sex life again. So, just like the long and coiled penises and vaginas of ducks, the evolution of traumatic insemination in bedbugs also seems to be the product of a series of male adaptations to bypass cryptic female choice along with female countermeasures to gain the upper hand again.

Excerpted with permission from Nature’s Nether Regions: What the Sex Lives of Bugs, Birds, and Beasts Tell Us About Evolution, Biodiversity, and Ourselves, by Menno Schilthuizen. Available from Viking Adult. Copyright © 2014.