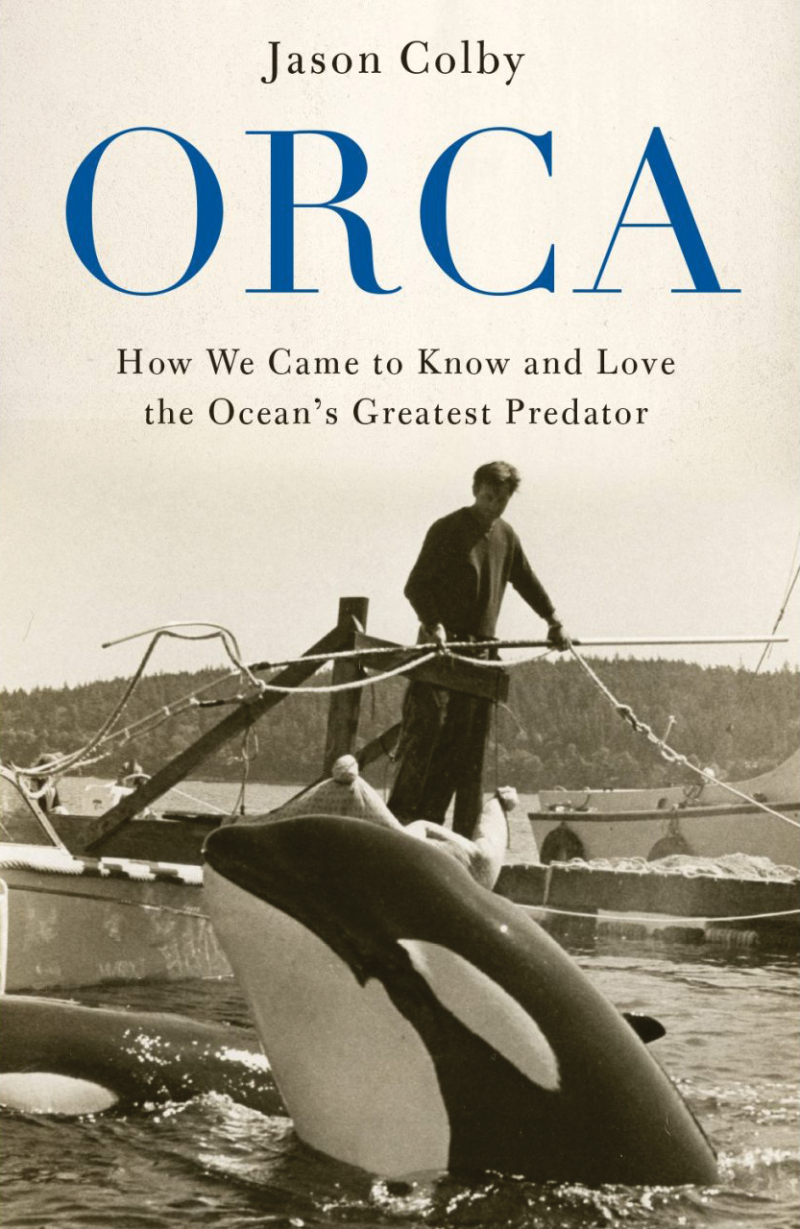 The crew wasn’t looking forward to this. It was the chilly morning of October 26, October 1973, and a southeastern swell had been rolling into Pedder Bay for hours. But Sealand’s twenty-man team was more worried about the task of restraining Taku. The bull killer whale was enormous—at least twenty-two feet long—and although he seemed friendly, no one knew how he would react. Most of the men smoked nervously as they watched the black dorsal fin circle the pen. As the water calmed, Bill Cameron exited the galley of the Western Spray, and lowered himself onto one of the logs bordering the pen. Bob Wright had hired the Pender Harbour fisherman to help handle the whales. Although a large man, Cameron had a gentle way about him. “You just have to treat them like herring,” he instructed. “You can’t spook them.”...

Taku didn’t like it. As his enclosure shrank, the orca squealed, slapping his pectoral fins on the water. In a nearby pen, another captured whale, Kandy, listened intently. “Dry him up!” yelled Cameron, and the crew pulled harder, drawing the mesh underneath the big orca. As his man-made pond vanished, Taku flopped onto his side, his upturned eye frantic with fear. To the relief of everyone, he didn’t lash out, and divers tilted him upright for an explosive breath. “I had a hunch he’d be that easy,” said Cameron. “It’s the females that are the tough ones.” But the hard part was yet to come.

With the big whale secured, DFO scientist Michael Bigg stepped away from a group of scientists gathered on deck. In his hands, he held a radio pack, which he had designed using Sealand’s captive orca Haida as a model. He planned to mount it on Taku in the first ever attempt to radio-tag a killer whale for release. Bigg handed the device to veterinarian Alan Hoey, who sat astride Taku’s back, and Hoey in turn slid it over the five-foot dorsal fin, securing it by threading iron and copper wire through the base of the fin. Bigg planned for it to stay in place for only thirty days, after which electrolysis would weaken the wire and release the spring-loaded pack. But he intended the next step to be permanent. At Bigg’s direction, Hoey cut two large notches in the whale’s dorsal fin. “It was hard to watch,” recalled Sealand Curator John Colby. “The blood just came spurting out.”

Bigg’s two-pronged experiment began the next day, when the crew released Taku. After tracking the animal east toward San Juan Island, Bigg lost the radio signal and never regained it. Weeks later, the pack popped off as designed, but the notches in the whale’s fin remained, making Taku—later labeled K1—easily recognizable. And that was the point. By cutting Taku, Bigg hoped to prove that the scars on killer whales’ fins were permanent and might be used, along with the patterns of their “saddle” patches, to identify individuals in the wild. It was a pivotal step in the study and conservation of orcas, and it was possible only with live capture.

It is a difficult connection for many critics of captivity to accept. Bigg died in 1990 at the age of fifty-one, and in subsequent years he became rightly recognized as the founding father of killer whale science. It was he who developed the system to distinguish individual orcas, which enabled him to identify the matrilineal ties that structure separate pods. It was he who determined the division between the fish-eating “residents” and mammal-eating “transients”—now called Bigg’s killer whales. And he achieved most of these breakthroughs on his own initiative, with virtually no funding or support from the Canadian government. Bigg was a pioneer in the noninvasive study of wild cetaceans, and as such many orca enthusiasts consider his work the antithesis of the oceanarium industry. Yet as the Taku experiment reveals, Bigg’s research developed in tandem with killer whale captivity.

Excerpted from Orca: How We Came to Know and Love the Ocean's Greatest Predator, by Jason Colby. Copyright © 2018 Jason Colby. Used with permission of the publisher, Oxford University Press. All rights reserved.