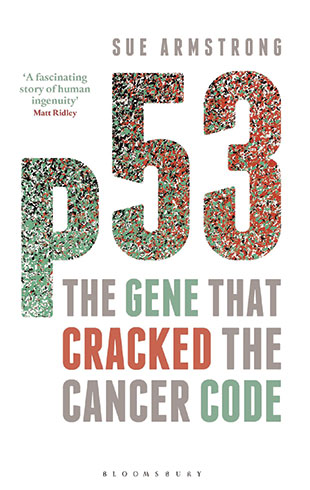 BLOOMSBURY SIGMA, FEBRUARY 2015In the long history of p53, huge amounts of data have been generated by scientists poring over little scraps of tissue and clusters of cells in test tubes and Petri dishes—specimens that have been coaxed and manipulated in super-controlled environments. “These [systems] are easy and convenient, but they’re not the real world,” says David Lane, co-discoverer of the gene in 1979, sounding a note of caution. “The more I look at p53, the more I realise that in the real world it’s operating at a very different level and in a different sort of way.” Tissue culture itself puts cells under stress and p53 into a state of alert, he says, and rather than studying the difference between active and inactive protein, what most researchers are in fact studying is the difference between very active and moderately active protein. Experiments using animal models tell a story that’s different and a lot more subtle.

Recognition of this fact lies behind one of the legendary stories of p53 research, and it involves David Lane and his friend and colleague, Peter Hall, both working at Dundee University at the time. The Year was 1992. The two scientists had been sharing a pint in a local Pub at the end of a busy day, and mulling over the crucial question of whether p53 responds to cellular stress in real life, as it does in tissue culture in the lab. They knew others were asking the same question and that competition to find answers was hot. They knew too that they faced a forest of paperwork to obtain Home Office permission for animal experiments, and their frustration at the prospect of inevitable delay was intense. Then Hall had an idea: why not conduct the experiment on themselves? Without hesitation, he volunteered to be the guinea-pig, and the two began to make plans. Telling me the story some years later, Hall said with his characteristic note of defiance that he and Lane knew they risked incurring the wrath of the authorities for not following standard procedure, but they were too fired up at that point to care.

The experiment involved subjecting Hall’s arm to radiation from a sun lamp—“equivalent to 20 minutes on a Greek beach”—and taking a series of time-staggered skin biopsies to watch the activity of p53. “We reckoned that if this gene does respond to stress in living organisms, we should see the accumulation of p53 protein in the cells in my radiated skin. And that’s exactly what we did see,” said Hall, rolling up his sleeve to reveal nine neat scars. “We did the experiment on me because we wanted quick results… The scars all got infected,” he laughed, “but the experiment worked brilliantly, and it moved the field on considerably.”

Such maverick experiments notwithstanding, yeast, worms and fruit flies have taught us a great deal about how cells work. But for insights into the workings of more complex organisms like ourselves—with organs and skeletons, circulating blood and immune systems—the animal model of choice is the mouse. Similar to us, mice have around 25,000 genes, almost all of which have counterparts in our own DNA. Furthermore, mice are cheap to maintain; they breed fast, producing a new litter roughly every nine weeks; and their genomes are relatively easy to manipulate.

For decades, scientists used selective breeding techniques to produce mice with desired genetic traits. Or they blasted their DNA with chemicals known to produce specific mutations: a process known as “chemical mutagenesis.” Then in 1989 came the birth of the first transgenic mouse created using a sophisticated technology called “homologous recombination.” Such mice provided a new “precision tool” that changed everything, and homologous recombination won its developers, Mario Capecchi and Oliver Smithies, both working in the U.S., the 2007 Nobel Prize for medicine. They shared the Prize with a Briton, Martin Evans, who was the first person to isolate the embryonic stem cells from which transgenic mice are created.

The story goes that Evans was on a month’s visit to the U.S. where he had gone to learn some new technological tricks at the Whitehead Institute in Cambridge, Massachusetts. With so little time for his mission, he was determined not to be side-tracked into giving lectures or meeting new people. He didn’t even want to speak to anyone outside the lab. Then he got a phone call from Smithies, a fellow Briton who had left for the U.S. many years earlier. Smithies was eager to learn more about Evans’ embryonic stem cells so vital to his own research goals. “I remember to this day, I said to him, ‘Oliver, you are the only person who I will come and visit…” Evans told an interviewer for the Nobel committee. And he turned up the following weekend at Smithies’ place with a flask of the cells in his pocket. Homologous recombination—more descriptively known as “gene targeting”—exploits the cell’s natural propensity for repairing breaks in its DNA by stitching in little pieces of matching DNA taken from another chromosome. In gene targeting, scientists insert into the cell a foreign piece of DNA carrying the desired genes, and they rely on it to find the appropriate place (where it recognises a matching sequence of genes) to insert itself into the host DNA, in this case kicking out the original sequence.

Over the decades, this method has been used to create many thousands of mice precisely engineered to model human conditions and diseases, from cancer, diabetes and cystic fibrosis, to blindness, obesity and alcoholism. As far as p53 research is concerned, one of the most valuable transgenic models has been the so-called “knock out” mouse, in which a specific gene is deleted from the mouse’s DNA to see how the animal functions without it.