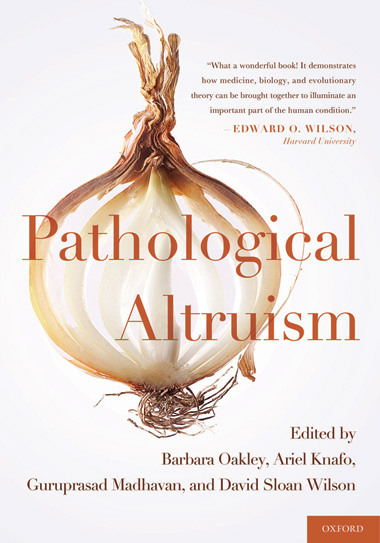 …One simple way of defining pathological altruism is to say that it involves well-meaning efforts that worsen the very situation they mean to help. This is explored by coeditors Guruprasad Madhavan and Barbara Oakley in their “Too Much of a Good Thing? Foreign Aid and Pathological Altruism” (Chapter 17). Such well-meaning behavior often involves self-righteousness, as explained by neurologist Robert Burton, in his personal story of one doctor’s abuse of power to “help” a mortally ill patient (Chapter 10). The dangers of “altruistic” self-righteousness in political partisanship (Chapter 5) are underscored by physicist and science fiction grand master David Brin, who also explores the dangers of modern Western notions of altruism as panacea in regard to the Search for Extra-Terrestrial Intelligence (SETI) project in Chapter 19.

A more sophisticated, nuanced view of altruism allows us to understand cultural differences in the concept, which in turn...

That different people may view a single act as either beneficial or harmful has legal ramifications, as explored by mental disability law expert Michael Perlin in his discussion of the field of therapeutic jurisprudence (Chapter 12). This cuts to the heart of life-or-death issues, such as whether people should be allowed to sell their own kidneys, or whether a cultural defense for beating one’s wife is, indeed, defensible. And, as Robert Homant and Daniel Kennedy explain in the aptly titled “Does No Good Deed Go Unpunished? The Victimology of Altruism” (Chapter 14) viewing altruism with nuance also allows us to understand phenomena that are often unmentioned or unexplored. Thus, for example, the more altruistic behavior reported by subjects, the higher their level of criminal victimization: Self-reported altruism appears to be a significant predictor of both property and personal crime victimization.

Researchers shy from examining the seamy side of altruism for many reasons. But one of the most important seems to be that exposure of altruism’s gloomy underbelly might discourage people from being altruistic. One could argue that pathological altruism isn’t discussed for altruistic—perhaps pathologically altruistic—reasons. The consequence is that few recognize the phenomenon for what it is. Without an understanding of all aspects of altruism—misguided activities are perpetuated, and horrific acts can result. It is vital to understand how attempts to do good can inadvertently worsen the very situation they were meant to solve, or create other problems, either anticipated or unanticipated. This is set into sharp view in Chapter 15, where Adolf Tobeña notes the single shared characteristic of suicide bombers—their altruism. And Augustine Brannigan points out, in Chapter 16, that genocide is committed by those seeking to help their fellow man.

Without an understanding of all aspects of altruism, misguided activities are perpetuated, and horri?c acts can result. It is vital to understand how attempts to do good can inadvertently worsen the very situation they were meant to solve, or create other problems, either anticipated or unanticipated.

Altruism is the first work to explore this phenomenon from multiple perspectives, rather than relying on a merely (and from some perspectives, outmoded) psychoanalytic approach. The volume synthesizes work from multiple fields, offering many viewpoints on aspects of pathological altruism. Each author brings a unique background to the work. The sum of their contributions will, it is hoped, serve as a scientifically grounded focal point for a new field—pathological altruism—providing a nuanced counterbalance to the study of altruism.

Let us introduce this volume’s contributions by following Goethe’s lead, as Faust asks:

“All right—who are you, then?”

“Part of that force which would do ever evil, and does ever good.”