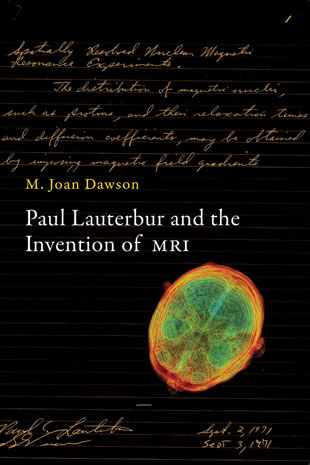 MIT PRESS, AUGUST 2013Life is so strange. It was because of the tortured history of NMR Specialties that Paul happened to be on hand to witness the experiments that raised in his mind the possibility of Magnetic Resonance Imaging. Paul was always squeamish about everything medical and biological, everything that had to do with blood and other tissues. He was loath to go to doctors and totally intimidated by the idea that he might have to have an injection or to have blood drawn. So finding a way to do NMR studies noninvasively took on a special meaning for him.

But how? The nuclear magnetic resonance signal is governed by the simple Larmor equation, which holds that the frequency of the signal is proportional to the strength of the applied magnetic field. Paul’s initial insight about NMR imaging was one brilliant flash of an idea: Gradients of magnetic...

Paul began to explore the potential of his new insight, or “moment—which didn’t feel like a really big moment—of realizing there was a principle that could be built on to this. After that it was a matter of thinking through each of the things that would have to be done if it were to be a practical technique, and that was spread over a period of at least several weeks.” Three conditions had to be met before MRI could become a useful diagnostic tool.

First: Once you have labeled separate regions using magnetic field gradients, how do you separate the signals into an image? “I realized that there was a trick that one could play that could make it possible.”

Second: Will NMR be able to pick up small volumes of tissue with useful sensitivity? This was not at all obvious; excellent scientists in the field remained skeptical for years to come.

Third: Can a large enough magnet be built? The magnets that chemists used to study 5 mm samples weighed a couple of tons. What would a system for studying humans look like?

Having satisfied himself that the answer is yes on all three counts, Paul reoriented almost all of his research in that direction. Paul had discovered that MR images could be made by placing a gradient of magnetic field across a sample. So now, as he said “I deliberately turned the controls on the spectrometer in the wrong direction, so instead of making the field more uniform, I made it variable from point to point.” But he soon realized that conversion of the data thus obtained into an image, while possible, was very inefficient. He simplified the method by applying a linear gradient of magnetic field across the sample. Because the nuclei in the sample produce signals at different frequencies along this gradient, the value of each frequency serves as an address, a zip code, indicating where in the sample each signal has originated.

By the time Paul returned to Stony Brook for the fall 1971 teaching semester, he was sure his new idea was practical. “And so I filled in everything. There was some mathematics that could be used to make pictures, there was going to be enough signal to do the studies, you could build a big enough apparatus to actually put people in, and so that seemed like a useful thing to try to do.” During the autumn semester he produced a cross-sectional image of an assembly of tubes. The results were a major breakthrough, but by now they were exactly what Paul expected. “I knew what I would see by that time,” he said. “It was not a matter of saying ‘Eureka! There’s an image.’ It was more like, Well I must have done things right, because I got what I expected to see.”