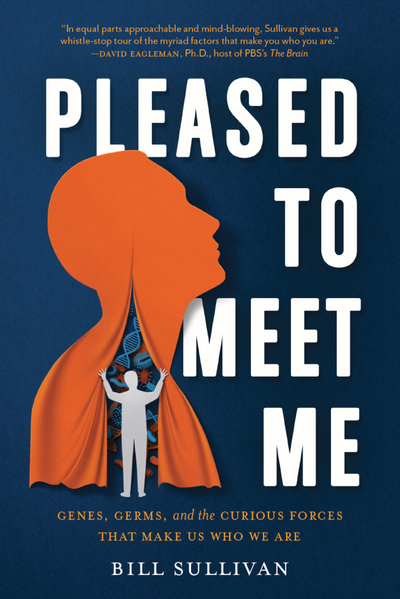 “How Your Grandparents’ Demons May Be Haunting You”

Do you suffer from a strange fear that you can’t explain? One in 10 people in the United States has a phobia, which is a crippling fear so intense that it occurs even when there is no danger. For example, people with acrophobia are terrified of heights, even if they are perfectly safe in a high-rise building. In the show Arrested Development, Tobias Fünke is “never nude” and even showers with his shorts on; he suffers from nudophobia, which really is a thing. Some other phobias include arachibutyrophobia (the fear of peanut butter sticking to the roof of your mouth), consecotaleophobia (fear of chopsticks), aulophobia (fear of flutes), and my wife’s kryptonite, chilopodophobia (fear of centipedes).

According to the National Institutes of Health, more than 19 million people in the United States experience diminished quality of life due to irrational fears and anxiety. Where do these odd phobias originate? Perhaps from your own experience. As a toddler, I nearly choked after shoving too many peanut butter cups into my mouth at once. I’m not sure I qualify as arachibutyrophobic, but to this day I eat peanut butter products with utmost care. Fears and other phobias that can’t be explained by our personal experiences may be rooted in our family tree. In The Graveyard Book, author Neil Gaiman wrote, “Fear is contagious. You can catch it.” And as it turns out, it’s not only contagious; it can also spread down through the generations, as suggested in the following experiment.

Acetophenone is a chemical found naturally in many foods, including apricots, apples, and bananas; in its purified form, it smells like cherries. Mice like the smell of acetophenone, but can also be taught to fear the scent. In 2013, neuroscientists Kerry Ressler and Brian Dias at Emory University used mild electrical shocks to condition mice to be afraid of a cherry scent. They would release acetophenone vapors into a cage of mice and then deliver a small shock into their paws through the floor. After three days, a whiff of acetophenone made these mice cower in fear even after they no longer received a shock. In other words, Ressler and Dias instilled an unnatural fear of cherries into these mice.

The researchers then took cherry-phobic males and mated them with normal females that were not trained to fear the smell of cherries. Unexpectedly, their mouse pups were born with a much greater sensitivity to cherry odors, growing anxious and frightful as soon as they caught wind of the scent. This is remarkable, because these pups were never taught to associate cherry odors with a shock. They were simply born that way, as if their father whispered a warning to the pups while still in their mother’s womb: “Little dude, run away if you smell cherries or you might get shocked by these goofy people in lab coats.”

Passing on a learned fear to your kid is pretty wild. But the biggest “shock” came when the grandchildren of these cherry-phobic mice continued to show an enhanced fear response to the cherry scent, even though their parents were never shocked. This surprising passage of traits through multiple generations that doesn’t involve changes to gene sequences is called transgenerational epigenetic inheritance.

Why is this so surprising? Because children do not normally inherit things that their parents have learned. For example, I was taught to clean up my crumbs after eating, but I assure you that my kids did not inherit this behavior. I took differential calculus in college for some reason, yet my kids still had to be taught basic arithmetic. And what parent hasn’t wished their kids were born potty-trained? So how can a mouse that learned to fear cherries pass this behavior on to his young?

The cherry-fearing pups were born as if they were tipped off to the environment—like a friend texting about a pop quiz occurring later that day. For information like this to be transmitted, some kind of message had to be passed to the sex cells in real time. This, in turn, means that sperm and egg cells must have a means of sensing the environment. The sex cells must also have a means to preprogram their DNA contents, so that the baby is born equipped to survive in their parents’ environment. As it happens, sperm cells do contain sensors for hormones, neurotransmitters, growth factors, and, yes, odors. A sperm cell literally “nose” what is going on out there! Could these receptors on sperm be like broad-range scanners that sense potential problems in the environment so the gene crew can prepare before the launch sequence? If so, how does it work?

Ressler and Dias examined whether the fear conditioning changed the mouse’s brain in any way. And lo and behold, the cherry-phobic mice were making much more acetophenone odor receptors (named OLFR151) in their brain compared with the unconditioned mice and their pups. The increased number of OLFR151 receptors made the mice more sensitive to the cherry scent.

Ressler and Dias hypothesized that fear conditioning must have caused alterations in sex cells, too. Indeed, they discovered that the OLFR151 odor receptor gene in sperm cells of the cherry-fearing mice had reduced DNA methylation. Without DNA methylation marks in the way, more of this odor receptor is made, leading to a heightened response to the cherry scent in the pups. And when these pups grew up, their sperm also lacked DNA methylation at the OLFR151 gene, explaining why their offspring were still afraid of cherry scents two generations removed from the initial fear conditioning.

Additional examples of transgenerational inheritance have since been discovered in other species, including humans. In previous chapters, we discussed examples of fetal programming, whereby an unborn child’s DNA is epigenetically altered in response to a parent’s environment, diet, or substance abuse. The same concept applies to transgenerational epigenetic inheritance—except that the changes programmed into DNA are passed on for at least one more generation. One of the best characterized examples of this in humans is seen in descendants of those who survived the Dutch Hunger Winter. In 1944, the German blockade of food to the Netherlands caused a devastating famine, the effects of which can still be seen today. Many of the children and grandchildren of these starved mothers were born small, and grew to be prone to obesity and diabetes. It is believed that mothers who were starved while pregnant had babies whose DNA underwent fetal programming to express genes that maximize extraction of calories from minimal amounts of food, a strategy that makes perfect sense if born into famine. However, thrifty metabolism is maladaptive in times of plenty, which explains why their offspring now struggle with weight problems.

More recently, epigenetic marks appear to have been left in the children born of pregnant mothers traumatized by the terrorist attacks of September 11, 2001. The children of mothers who developed post-traumatic stress disorder (PTSD) as a result of the 9/11 attacks displayed an increased risk of anxiety problems.

Both fetal programming and transgenerational epigenetic inheritance are as humbling as they are startling. These corollaries to evolution imply that some of your behaviors (good and bad) could be the result of something your parents, or even your grandparents, experienced. We can put this knowledge to good use: Knowing that stress and trauma may scar DNA for multiple generations should further inspire us to provide better environments for children without delay.

Excerpted with permission from Pleased to Meet Me: Genes, Germs, and the Curious Forces That Make Us Who We Are by Bill Sullivan. (National Geographic, August 2019).