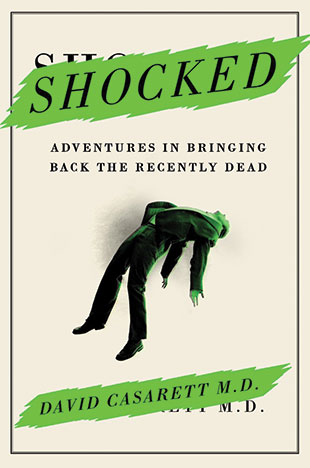 Now, under normal circumstances, I’m fine with that strategy. Not touching rodents is pretty good rule to live by. But today, I confess that I do want to touch this mouse. Very much.

This particular mouse is lying on an upturned, gloved palm, and it looks dead. In fact, it looks about as dead as it’s possible for a mouse to look. This, it may surprise you to learn, is why I want to touch this mouse.

Honestly, this surprises me too. If there’s one rule for healthy living that is more useful than “Don’t touch mice,” it’s “Don’t touch dead mice.” And yet, that is exactly what I want to do right now.

I really want to touch this dead-appearing mouse because the hand on which it’s resting is connected a researcher named Cheng Chi Lee. Cheng is a respected researcher...

This mouse is why I’m in Cheng’s lab. It’s a locked and hermetically sealed box of a room with double doors and ominous black walls in a nondescript research building at the University of Texas in Houston. This is where Cheng studies suspended animation, or hibernation, or torpor or, to use the phrase that he’s come to rely on as being least likely to incite riots of science fiction nuts: hypometabolism.

Cheng is a short, balding, middle-aged biochemist who has been in the research game ever since he immigrated to the US in 1986. He has the weathered face, wire rim glasses, and frumpy clothes of a farmer, or a hardware store clerk, or, I suppose, of a biochemist. He looks eminently trustworthy. And that’s a very useful attribute to have if you’re trying to convince the world that you just may have stumbled on the secret of hypometabolism (the state previously known as suspended animation).

“This is really neat,” Cheng says about the apparently dead mouse.

It’s at this point in our brief conversation that I wonder whether, perhaps, Cheng’s definition of ‘neat’ is a little different than mine.

He proffers the mouse, two-handed, in the way that a reverential sales clerk might offer a discerning shopper the chance to try on a $10,000 Rolex.

Cheng’s mouse looks lifeless, and apparently dead. This is sad, because when I met this mouse about 40 minutes ago he was alive and well. I can’t say that we bonded, this mouse and I. But we were acquainted. And now, it seems, he’s dead.

When we first walked into this inner sanctum of hypometabolism research, the mouse that is now lying on Cheng’s outstretched hand was scampering around his cage. Then Cheng’s graduate student Tre held it carefully by the scruff of its neck and gave it an injection of something. (We’ll get to what that ‘something’ is in a moment.) Then my little mouse friend was placed in a sealed box in a dark, cool cabinet that allowed us to monitor his activity, temperature, and—most importantly—his metabolism, from a computer just outside.

The little guy that I’ve begun to think of as ‘my’ mouse is #0011. So for the past 40 minutes, we’ve been watching #0011’s vital statistics flicker down the screen. The most important of these is his VO2, a measurement of the milliliters of oxygen per kilogram that he uses per hour. Essentially, VO2 is a measure of how fast his metabolism is working. Initially, #0011 had a VO2 of 4410. That was right after Tre’s injection.

Now he’s lying in an outstretched palm. And he’s dead. Or is he?

My second observation takes me a little longer. Finally, though, the penny drops. This little mouse is idling at room temperature, but he’s not shivering.

Cheng nods. “Right. And no piloerection, either.” He means that the mouse’s fur is not standing up to provide increased insulation, the way it would if a normal mouse found itself at this temperature.

So my mouse is cold. But he’s not doing anything that a mouse at 23 degrees should be doing to warm up. However, my mouse isn’t dead.

He’s just…what? Sleeping? No, that doesn’t cover the low body temperature and hypometabolism. Hibernating? No, because mice don’t hibernate. None of those terms really fits. He is a mouse that has been injected with…something.

I turn to Cheng, who is grinning. He’s been waiting for this moment. OK, so I have to ask him. What was in that injection?

The answer, it turns out, is adenosine monophosphate (AMP). My mouse, #0011, received an injection of AMP before it entered a state of hypometabolism that fooled me in to thinking that it was dead.

Cheng is grinning because he appreciates the potential implications of this discovery. Victims of cardiac arrest or a motor vehicle accident, for instance, would have a much better chance of survival if they have a profoundly decreased metabolism and oxygen consumption. He’s careful not to promise too much, too soon. He’s seen how ideas that work in the laboratory fail in the real world. But he’s optimistic.

Excerpted with permission from Shocked: Adventures in Bringing Back the Recently Dead, by David Casarett. Available from Current. Copyright © 2014.