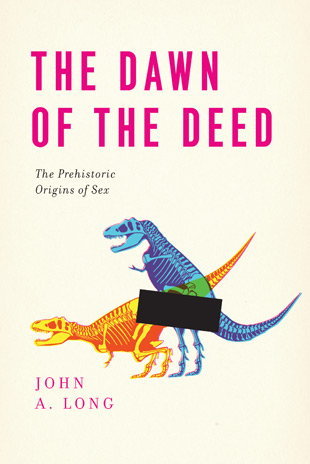 THE UNIVERSITY OF CHICAGO PRESS, OCTOBER 2012

From Clasper to Penis: We've Come a Long Way, Baby

Today when we want to discover something new about our evolutionary history we can do two things. Firstly, we can go into the field and find fossils that reveal new data showing how the primitive pattern of bones may have transitioned from one form to another. Fossils like Tiktaalik or Materpiscis are good examples of specimens that revealed significant new information about our distant evolution. The second method is to examine the distant history that is entrapped in our own genes within our chromosomes. Our DNA, which is in effect tiny pieces of a gene, is a treasure trove of past history about our evolutionary development. This field of science is termed “evolutionary developmental biology,” or simply “evo-devo” by us devotees. Evo-devo involves studying the development of animals through analyzing their embryonic...

The really big breakthrough of modern-day evolutionary biology has been the discovery of Homeobox genes (often shortened to Hox), which determine the sequence or organization of how body parts are built. In essence they are a combined toolkit and blueprint for the way our bodies develop, and once the egg has been fertilized and our cells start dividing, they go into action.

The combined study of evo-devo with the study of fossils has revolutionized our understanding of evolutionary transitions from fishes to the first land animals. The almost symmetrical digit patterns in the hands and feet of early tetrapods (as opposed to the pattern in later tetrapods which have five digits all difference size) are better explained in the light of Hox genes. Thus the timing of when certain genes first became activated to develop certain patterns in skeletons can be matched with actual fossil data.

So how does this relate back to us humans? A study of developmental biology in mice by Martin Cohn published in 2004 showed that the genital tubercles (the bud from which genital organs will develop – see image in picture section) and limbs are both activated simultaneously by Hoxd13. He concludes that: “Limbs and external genitalia undergo many similar morphogenetic processes, and … the same molecular mechanisms may operate during development of the limb bud and the genital tubercle.”

This was a revelation for me. Here was the first piece of modern developmental biology data tying the origins of my placoderm claspers directly to the mammalian penis. Whereas the actual substances of how genitals are made might differ throughout the evolution of vertebrates, the genes that develop them appear to be the same and can be traced right back to the very origins of limbs. Like building a house out of bricks, wood or straw, as long as the blueprint is the same, the same kind of structures will be built, even if the materials used are different. Both placoderm and shark claspers are formed from a part of the developing pelvic girdle which was predestined to one day become the legs of us humans.

So initially, the reproductive structures of early jawed fishes were paired as part of the leg or hind limb pattern of bones. After paired fins had transformed into legs, the claspers were lost, but instead other paired reproductive structures merged from the urogenital plate, such as the hemipenes of lizards and snakes. In subsequent evolutionary radiations, the paired units became unnecessary as only one mating organ was required to do the job properly, so the single penis emerged, so to speak, as the dominant male reproductive organ in higher vertebrates.

Of course, losing the penis altogether happened several times in vertebrate evolution, as in some primitive reptiles (the tuatara) and the vast majority of flying birds (passerines), when for one reason or another an alternative reproductive strategy evolved. Just as limbs can be lost several times independently throughout vertebrate evolution (legless lizards, caecilians, snakes have all lost legs independently) or even several times within the many species of a single genus (as in Australian Lerista lizard species), so penis loss was apparently no big deal for some lineages of vertebrates.

We humans sometimes speak about “getting a leg over” when referring to having sex, but for placoderms and it was more about “getting a leg in.” Our humble mammalian penis might not look like it has a long evolutionary history, but indeed it has a deep developmental pedigree that can now be traced back in time to the very origins of arms and legs in all backboned animals.

So when you are next making love to that special person, and enjoying all the physiological pleasures afforded by our anatomy, give a little cry of joy for the ancient armored placoderm and all that it has given us. Because of some strange twist of biological fate, we have kept one of the most interesting parts of our reproductive anatomy from our archaic evolutionary history when other lines of animals managed to do perfectly well without it.