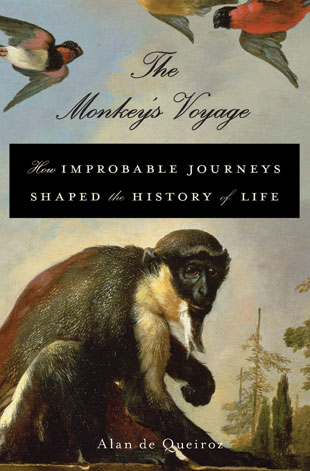 BASIC BOOKS, January 2014If you get stranded up there, whatever you do, don’t try to climb down. That’s basic advice for biologists working on the summits of tepuis, the isolated, table-top mountains that dot the savanna of southern Venezuela and nearby parts of Brazil, Colombia, Guyana, and Suriname. Tepuis—“houses of the gods” in the language of the local Pemón Indians—are the monolithic remnants of a sandstone plateau that formed well over a billion years ago, long before the breakup of Gondwana or the formation of Pangea. Much more recently, over the past 70 million years, wind and water have been grinding down the plateau, with only those parts that were capped with more resistant rock remaining as these towering flat-topped mountains, their standstone cliffs now rising thousands of feet above the surrounding country. On the tops of the tepuis are misty, dripping landscapes of dwarf forests; streams running...

The otherworldliness and inaccessibility of tepuis are exactly what draws biologists to them. Those cliffs that keep people from climbing up or down are also a barrier for other living things and, to many biologists, this has implied that the organisms living on the tops of the tepuis have been evolving in prolonged isolation, perhaps for many millions of years. This idea of tepuis as areas populated by relicts took root in the Western world in the 1860s, before Europeans had even climbed them. In the early 1900s, when Arthur Conan Doyle wrote The Lost World, famously imagining a tepui filled with dinosaurs, pterodactyls, ape-men, and other prehistoric creatures, he wasn’t inventing a view of tepui biotas so much as taking the accepted notion to a romantic extreme. And it’s a notion that persists, albeit without the megafauna. For instance, in the late 1980s, Vicki Funk and Roy McDiarmid, Smithsonian biologists who had explored tepui summits (and gotten stranded on one for ten days), speculated that tepui organisms might be “remnants of an ancient biota that dates back millions of years to a time when South America and Africa were a single land mass.” In other words, tepui biotas are like isolated pieces of old Gondwana, reminiscent of what people have imagined for islands such as New Zealand and New Caledonia. Along the same lines, Jesús Rivas, a Venezuelan herpetologist, said of the tepuis, “They are like a place where time stopped.”

But, then again, maybe not.

On the boggy plateau of the tepui called Cerro de la Neblina—“Mountain of the Mists,” a name that would fit almost any tepui—lives a miniaturized plant that eats animals. The species is Drosera meristocaulis, and it’s a pygmy sundew, a plant that catches insects in sticky drops exuded from tiny stalks that cover its red, spoon-shaped leaves. On the tops of tepuis, it turns out, carnivorous plants like D. meristocaulis are a dime a dozen; tepui soils are infertile, which makes them good places for plant species that can supplement nutrients from the soil by trapping and digesting insects and other small creatures. Some tepui plants may even specialize in eating protozoans, which they trap in corkscrew-shaped structures on root-like underground leaves. For our purposes, however, what is really significant about D. meristocaulis is not what it eats, or anything else it does, but where it came from.

Drosera is a big genus, with some two hundred species, concentrated in the Southern Hemisphere, but with at least some species on every continent except Antarctica. Find a nice bog, and there’s a good chance some species of sundew will be living there. Despite their wide distribution, though, sundews, because of the properties of their seeds, are not considered great long-distance dispersers. Their seeds don’t float and are killed by salt water; they don’t have wings or tufts for drifting on the wind, or hooks for latching onto fur or feathers; and they aren’t enclosed in fruits designed to be eaten by birds or other animals that might transport the seeds to some faraway place. Basically, sundew seeds just fall to the ground or get blown a short ways, usually ending up close to the parent plant. Over millions of years, members of the genus obviously have moved great distances, as their worldwide distribution indicates, but the assumption is that they accomplished this in small steps, not giant leaps.

In the evolutionary tree of sundews, one can see the signature of their limited powers of dispersal. Specifically, the sundew phylogeny strongly shows geographic structure, a fancy term that just means that closely related species tend to occur near each other. So, for instance, a western Australian sundew’s closest relatives are likely to be other western Australian sundews, and a southern African sundew’s closest relatives are usually other southern African sundews. However, there are some conspicuous exceptions. For instance, two species found in the eastern United States fall within a group of South American species, indicating that their ancestors dispersed from that continent.

South America and Australia were both once part of Gondwana, so one can imagine a continental drift scenario to explain the connection of a Neotropical sundew to Australian species. However, molecular dating makes that explanation extremely unlikely, if not impossible. According to molecular age estimates, D. meristocaulis split from its Australian relatives only within the past 12 to 13 million years, long after the breakup of Gondwana, and its ancestors therefore must have reached South America by oceanic dispersal. The tepui sundews are certainly now isolated from any closely related species, but they are by no means ancient relicts. Measured by the span of deep time, they are yesterday’s immigrants.