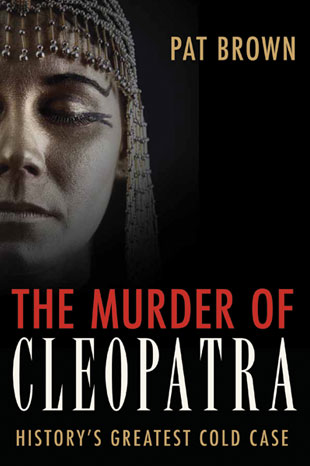 PROMETHEUS BOOKS, FEBRUARY 2013The death of Cleopatra, though two thousand years old, is like any other cold case with a suspicious death scene. There is a body, there is a crime scene, and there are witnesses (even if they are only testifying to what they found after the deceased was discovered). Any good crime analyst knows that what one might think to be true on first glimpse may turn out to be completely incorrect when the evi­dence is analyzed.

Scenes can be staged, family members might remove objects to cover up embarrassing facts or to ensure collecting insurance money, and the first people on the scene may disturb the evidence in their rush to help, or in their panic. Or they might be thieves simply taking advantage of the circumstances.

All of these possibilities must be taken into account when attempting to determine what actually happened to the...

Finally, each aspect of the physical evidence must be factored in: the wounds, the position of the body, the time of death, the weapon, the location, the weather . . . every physical feature of the world encompassing the victim, and an assessment of how each feature might have affected the final moments of the victim’s life.

The ancient crime scene of Cleopatra had to be treated in a like manner. One cannot simply accept the words of a few observers or “journalists” or politicians or later writers. What we think we know of a past event is often distorted, and unless we examine all the evi­dence to uncover the truth, the distortion will remain.

I was shocked at the number of red flags that popped up from the pages of the historical accounts of the Egyptian queen’s final day. How was it that Cleopatra managed to smuggle a cobra into the tomb in a basket of figs? Why would the guards allow this food in and why would they be so careless in examining them? Why would Octavian, supposedly so adamant about taking Cleopatra to Rome for his triumph, be so lax about her imprisonment? Why would Cleopatra think it easier to hide a writhing snake in a basket of figs rather than slip poison inside one of the many figs? How did all three women end up dead from the venom? Wasn’t it unlikely that the snake cooper­ated in striking all three, releasing sufficient venom to kill each of them? Why was the snake no longer present at the crime scene? Was a brand-new tomb so poorly built that holes remained in the walls of the building? Why did the guards not look for the snake once they thought it had killed the women? Why were the wounds from the fangs of the snake not obvious? Why did the women not exhibit the symptoms of death by snake venom or even by poison? Why did the guards not see any of the women convulsing, vomiting, or holding their abdomens in agony? Why didn’t they see any swelling or paral­ysis of face or limbs or any foaming at the mouth?

Now filled with questions, I began to work backward in the texts. Did the behaviors of Cleopatra and Octavian support a suicide? As a criminal profiler, one of the important tasks of analyzing crimes is reviewing the behavioral history of the players; no one acts outside of one’s own frame of thinking.

With each step back in time from the end of Cleopatra’s life to the beginning, I discovered more and more evidence pointing to a radi­cally different explanation of history than the ancients and Octavian wanted us to believe.

While I was in Egypt, Rome, and England working with Egyptologists, poison experts, archeologists, and historians of the ancient world, I began to piece together another, more credible story behind the death of Cleopatra.

I believed Cleopatra was tortured.

I believed Cleopatra was strangled.

I believed Antony was murdered.

I believed Cleopatra did not hide in her tomb with her treasure.

I believed Cleopatra did not bargain with Octavian.

I believed Cleopatra planned a brilliant military maneuver at Alexandria, her Actium Two, which this time would not have been an escape strategy from a failed naval battle, but a faux naval battle to permit a successful escape from a dire military position that offered little hope of survival.

I believed Cleopatra did not have Caesar’s son.

I believed Cleopatra may have been one of the most brilliant, cold-blooded, iron-willed rulers in history and the truth about what really happened was hidden behind a veil of propaganda and lies set in motion by her murderer, Octavian, and the agenda of the Roman Empire.

Now I had to prove it.

Reprinted from The Murder of Cleopatra: History's Greatest Cold Case, by Pat Brown. Copyright © 2013 by Pat Brown. Reproduced with permission from Prometheus Books.