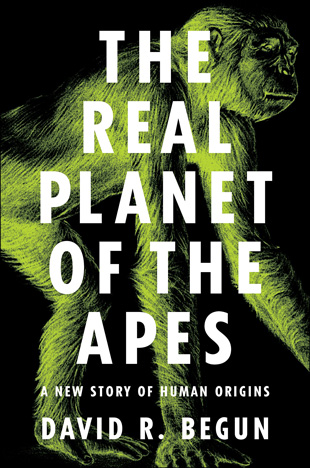 Summer in Sabadell, Catalonia, northern Spain, is hot and muggy, despite the proximity of the sea and the mountains; 1991 was no exception. The struggling air conditioner in the lab of my colleague Salvador Moyà-Solà’s seemed to be generating more heat than cool air, and my six-year-old son André was reaching his breaking point. So we decided to go visit the site, Can Llobateres, a few kilometers out of town.

I parked on the side of the road and we got out to have a look around. We had to cross a flat, barren area between the road and the outcrops where the fossils are found, which André did with considerable hesitation, because it was used by local people as a garbage dump. With some coaxing from me, we made it to the section, a small cliff that shows the...

It was a second outcrop that had been carved out of the landscape when a small dirt road was built to allow farmers easier access to their fields. The exposed sediments looked similar to those in which I knew fossils could be found, but these were above the ones we had excavated the previous year. As we do, I hacked away at the section with my geologic hammer to see what the fresh sediment looked like, and it was the nice light blue-green mudstone that we like to see: not too weathered, oxidized, or reddish and thus more likely to contain fossils. I found a few fragments of snail shells, which was also a good sign that animal remains were preserved there, so I decided to show my colleague Salvador the spot the next day to convince him that we should put an exploratory pit there, in addition to our main excavation in the lower levels.

The next day my Salvador and I went to the spot on road cut. We both raised our hammers and hit the wall simultaneously in the same place I had cleaned the day before. The next thing that happened I remember in slow motion. Somehow we had hit the wall in the exact spot where a skull lay, and we watched as a tooth popped out of the wall and rolled down onto the road. We looked at each other in astonishment, both recognizing that before the project even started we had found something far more important than anything we had recovered in the lower part of the site after four weeks of backbreaking work in 45° Celsius (113°F) heat the year before. We had planned only to do a small amount of sampling in the upper section of the site, but after that tooth rolled out, we spent the rest of the field season up there.

By the end of the month in the upper levels of Can Llobateres, we had recovered a nearly complete face of the ape Hispanopithecus. It was by far the best-preserved ape specimen ever found in the more than fifty-year history of research at the site. In another spot in the same road cut, we found part of an ankle joint, and in the following year, the colleagues from Spain (I had since moved on to another project) found many more bones of the same skeleton. This is the only ape skeleton that has ever been found at Can Llobateres.

A few years later I was setting things up for my project in Hungary, trying to figure out where we would focus our efforts. This site, called R II Rudabánya, is more like an archeological excavation. It is a fairly flat surface covered by a roof. Every field season we have to mark off the site into a grid with posts and string in 1-by-1-meter squares, which takes a little time.

The retired geologist and long-time local friend of the project Gábor Hernyák had shown up in the morning and was ready to break some rocks, having little patience with the niceties of documentation. He was eager to get to work, whacking away at rocks to find fossils, so I put him to work where he could do no harm. I asked him to clean an area of the exposed rocks that I knew from previous years was unlikely to have many fossils. While Gábor was excellent at finding fossils, we wanted to recover them in situ, that is, as they were buried, so we could understand how they ended up where we found them. Again, it is like a crime scene, where the body might be the focus but everything around it is important as well. You don’t move the body until the CSI experts are finished processing the scene. So I asked Gábor to “clean” an area, by which I meant sweep the loose dirt off the solid dirt to see what the rocks look like. As I walked up the slope to my car to fetch something, I don’t remember what, I heard Gábor crying “Anna, Anna, Anna.” He had swept off some loose dirt to reveal the side of a jaw of a small ape, which he thought initially was the smaller of the two primates from Rudabánya, Anapithecus, hence the cries of “Anna, Anna, Anna.”