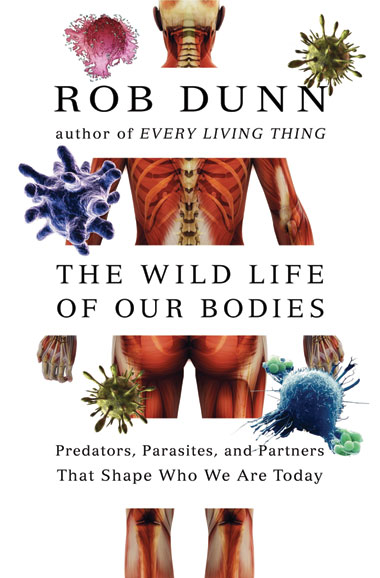 Our parasites and mutualists influenced our bodies. It is the predators, though, that messed with our minds. We come from a long line of prey; we have been eaten since we were fish. For most of our history, we were more like the pronghorn than the cheetah, more likely to flee than to chase. So it is that time and natural selection had, until very recently, favored the wary over the brave. You can experience your body’s reaction, its wariness to the threat of a predator, when someone jumps out at you from a dark hiding spot. You can feel this past when you watch a scary movie or even by reading about someone else’s scary experience, for example the day in 1975 when a girl in India named Bakhul and her girlfriends went to gather the leaves of walnut trees to feed to the...

On that day, she was the first to finish gathering and to start down the tree. As she did, she felt a tug on one of her small feet. Was it one of her girlfriends? No, it was firmer, less playful. A tiger stood at the base of the tree. It looked up at her with big eyes and pawed again with its claws extended. It pulled her like a lamb. She screamed and held on, but only for a moment. Her leaves fell around the tree, as did the beads of her small blue necklace. The tiger carried her into the woods. She screamed. She was terrified, but still alive.

When they were told about the tiger, Bakhul’s mother and father were despondent beyond words. One town over, a woman had seen her friend taken by this same tiger and it had left her mute, in shock. Bakhul’s parents, too, seemed unable to speak. The wife stirred the pot of their food. The husband sat, unhinged. The door of his life had swung open and it could not be put back. Somewhere at the edge of town or in the quiet between houses, the tiger was walking. Bakhul might still be alive, but no one chanced searching for her, not yet. The families shook and waited inside their houses for whatever might come. Lightning strikes the same spot only once, but tigers can strike repeatedly. This tiger had already killed more than two hundred people in Nepal before armed guards chased her across the border. Once in India, she had killed another two hundred and thirty-seven. Now it was this town that she would do whatever she did next. Given her history, she would almost undoubtedly eat someone else; if not Bakhul, then who?

In this story, one wants to yell at Bakhul’s family to look for her. “Search her out!” “Be brave!” No one would have listened. The town was shuttered in fear. Doors stayed closed. Children peed into cans and poured them out the windows. Adults, too, searched for their own vessels or crouched just outside the door. This society had turned inward and gone rancid with fear and excrement. No one wanted to leave their houses, even as food began to run low and the crops rotted on their stems. Even baboons, stronger, faster, and better defended than humans, hang close to their kin when predators are near. They sit back-to-back looking out and groom each other, gently touching each other’s heads and backs, just as it was in this village, each person tending to each other with equal parts tenderness and alarm.

As the villagers waited, they had time to recount other stories they had heard about this tiger and when those stories were exhausted, about other tigers. One town away, in the village of Champawat, a group of men was walking along a path near the village when they heard screaming. Then they saw a tiger coming toward them, and in its mouth, a naked woman, her long hair dragging as she cried for help. In that story too, the men had been too scared to act and so the tiger, carrying the woman, continued on its way. There were dozens more stories. Most ended fatally, but every so often the person was saved, and so they hoped for Bakhul. They hoped for her to stagger back into town, hoped because they were all, each and every one, too terrified to act.

Bakhul’s story has lived on through the writing of Jim Corbett, the great hunter of man-eating animals. It was Corbett that would eventually come to try to find Bakhul and then to kill the tiger. The longer story, though, of humans and predators is salted deep in our folklore and culture. It is also embedded in our bodies, in our genes and their products, in particular a network of ancient cells in your brain, the amygdala. The amygdala is connected to both the more ancient and more modern parts of our brains. It, along with the adrenal system, is caught half way between our deep past and the present. From there, it urges us into action or contemplation, depending on the circumstances. If you felt any eagerness on behalf of Bakhul, any modest restlessness for resolution of her story, an interest that perhaps even sent a chill or two down your arms, it was because of your amygdala and its signals. But more generally, it was because you are descended from a long line of individuals who escaped being eaten, at least long enough to mate, a lineage going back not just to grandma but to lizards and then even further. Your heart pounds harder when you are afraid (or angry, a point to which we will return) because of the pulleys and levers of your adrenal glands and the signals sent from your amygdala to your brain stem, that even more primitive root of our actions and wants. This system, sometimes called the fear module, evolved primarily to help us deal with predators, whether by flight or, less often, at least historically, fight, but is a finicky system that can be aroused at the mere idea of a threat. Fear, or at least the urge that precedes it, may even be our default reaction to our surroundings. Some elements of our amygdalas appear to constantly send out signals to our bodies that we are afraid. Most of the time, other parts of the amygdala suppress those signals. But when we see, hear, or experience something that triggers fear, the suppression is released and fear courses through us, instantly, like a bomb in our brain.

Our fear modules have been shaped by many thousands of generations of killings and near escapes, since the very earliest moments in which animal pursued another. Now we retaliate against these predators, but for most of our long history of interacting with predators, we did not have guns. We did not even have the wherewithal to pick up and wield sticks. We screamed (the scream itself being a near innate element of the fear module) and ran. If we did not, it was just a matter of time before we went “one by one into the capacious stomach of (our) arch-enemy, which never neglects an opportunity of reducing (our) numbers and thus fulfilling its mission in life.”

When asked around campfires and poker tables to construct stories of our identity, we tend to cast ourselves as the predators, both powerful and in control. In storybooks, Little Red Riding Hood is always saved, just in nick of time. That may be who we are now, Johnny to the rescue with his big, bad, gun. But the truth is that for most of our history we were not able to save the little girl in the den of the wolf. We may have tried, but natural selection seems unlikely to have rewarded those attempts, at least for the first several hundred million years. By the time Bakhul was attacked, attacks had become less common and yet still occurred (and occur) nearly every day. The tiger that had found Bakhul would turn out to be a “man eater,” an individual that, through injury or age, had become unable to attack its ordinary prey that might fight back. For most of human history, though, our ancestors would have been eaten simply as one of a variety of possible kinds of prey. As we grew more common, we may have actually become more preferred. The more of us there were, the easier we were to find.

Predators did not avoid our ancestors until they had weapons. Even then, the entire concept of man-eaters suggests our ancestral weakness rather than our strength. Injured and old “man-eaters” eat and ate humans because we are the easiest to catch and kill. We have no horns, sharp teeth or even hair to impede digestion. We are nearly as well packaged for consumption as a hot dog. The “Man-Eaters of Tsavo” are rumored to have killed dozens of people in Kenya, enough to have impeded the construction of the railway from the shores of Lake Victoria to the port of Mombasa. The two, male, lions were eventually shot and shipped back to London, where they sat ignored in a museum for a hundred years. However, a study of the bones and mouths of these lions shows that they had been sick, in one case deformed and missing a number of their teeth . In other words, if you are an old predator that cannot catch anything else, a human is your best alternative. We are among the only animals, aside from a three-legged wildebeest or our simple-minded cows, so defenseless that even an animal with a broken leg or missing teeth can catch us. Today, those animals that attack us tend to be killed (as eventually were the Man-Eaters of Tsavo), but for most of our history they operated with impunity. Our ancestors could barely see in the dark, and so when they heard a sound in a cave they crouched, listened and hoped that if it was a tiger, bear or other big carnivore, it would eat somebody else first. Imagine peeing in the woods at night with the stars overhead and the sounds of lions or tigers and other animals in the grass all around. It was perhaps with such thoughts in mind that San Bushmen rendered cave paintings of lions dismembering humans. Such scenes have long haunted our dreams.

From THE WILD LIFE OF OUR BODIES by Rob Dunn. Copyright © 2011 by Rob Dunn. Used by permission of Harper, an imprint of HarperCollins.