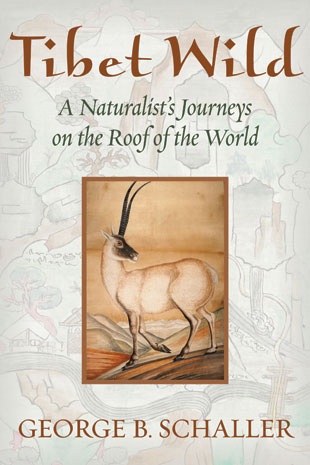 ISLAND PRESS, OCTOBER 2012Though drawn to remote and little-known places by inclination, I also knew that the Chang Tang in northern Tibet and other parts of the Tibetan Plateau harbored a variety of large mammals, none of them studied, their lives still a mystery. Years of political turmoil had decimated China’s wildlife, as I had noted during the panda study, and I wondered about the current status of various other species. Mainly I wondered how certain species of the Tibetan Plateau had fared. I wanted to delve into the lives of the Tibetan antelope (or chiru), the Tibetan wild ass (or kiang), the wild yak, and other members of the unique mammal community on these uplands. Initially the State Forestry Administration (called the Ministry of Forestry at the time) in Beijing suggested that I survey the distribution of snow leopard. This I did, but soon my attention shifted...

To learn as much as possible about chiru became a personal quest, almost an indulgence, and it gave direction and coherence to much of my work on the Tibetan Plateau. To save one of the last great migrations of a hoofed animal in Asia, surpassed in number only by the million Mongolian gazelles on the eastern steppes of Mongolia, is important for itself, as well as to China and the world. And no one else at the time had devoted themselves to the task. By happy coincidence the chiru offered me an opportunity to explore terrain which few had ever seen and at the same time to study a little-known species. I am less a modern field biologist devoted to technology and statistics than a nineteenth-century naturalist who with pencil and paper describes nature in detail, though with little desire to collect specimens, as was then in vogue; instead I strive to observe species and protect them.

To become familiar with an area that is still healthy, productive, and diverse, one still unspoiled by humankind, has a special appeal.…Here in the Chang Tang was a neglected area of over 300,000 square miles, a third of them uninhabited, an area twice the size of California, or the size of France and Italy combined. Here one could address the conflicting demands of conservation, development, and the livelihood of its pastoral people, and here conservation would not need to be confined to a protected area of modest size but could involve a vast landscape, one larger than many countries. Good management options persisted and solutions to problems could be applied based on solid science, sound policy, and local support, drawing on the knowledge, interests, and participation of the area’s communities.

Changes in the Chang Tang, already under way in the 1980s when I first visited, have been accelerating with more roads, more households, more livestock, and more fences, which, together with new land-use policies, have had a major impact on the land and its wildlife. As economic conditions have improved, most families have settled into permanent houses instead of nomadic tents, and have exchanged horses for motorcycles. Livestock is often kept in fenced private plots instead of herded on communal pastures, leading to overgrazing and hindering the movement of wildlife. The conservation goal now, as before, is to manage the rangelands, livestock, and wildlife in dynamic stability, to maintain ecological wholeness. Changes over recent decades have made this more difficult. My perceptions and actions have had to change as well. As the human population grows there as elsewhere, one has to confront the necessity of limits, of regulating the use of the landscape. Some parts should be wholly protected, closed to human intrusion, where plants and animals can seek their destiny. Much of the northern Chang Tang is such a place, one still mostly devoid of people, and it requires such full protection. Other parts need to be managed in cooperation with the local communities, limiting livestock to sustainable numbers, managing wildlife to reduce conflict, strictly regulating development, and the like. When I now return to the Chang Tang, I can still see the past in the present because relatively little land has so far been degraded by human action. My mission, indeed my passion, is to help the Chang Tang endure for decades and centuries to come in all its variety and beauty through careful, intelligent management.

Conservation is a long journey, not a destination, something to which my years in and around the Chang Tang can attest. Chinese expeditions had done important initial work by making lists of species and plotting their distribution, but my Han Chinese and Tibetan coworkers and I came with a different agenda. We came not just to learn but also to inform and inspire, to reveal the richness of the Chang Tang and other places in this region of the world.