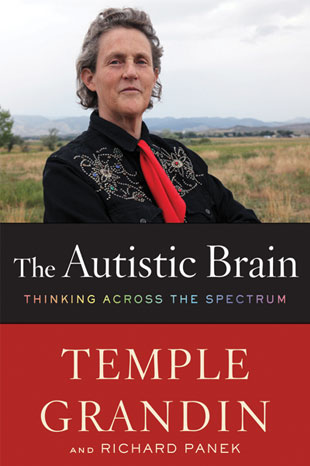 HOUGHTON MIFFLIN HARCOURT, APRIL 2013When I was young, I thought everybody processed information the same way. I assumed that everybody else thought in photorealistic pictures, as I do. For example, if I think about a soccer ball, I first see the soccer ball I played with in elementary school, then I envision the volleyball in the movie Castaway where the guy in the FedEx plane crashes on a remote island, and finally a FedEx package on my doorstep flashes into my imagination. My mind goes from soccer balls to FedEx packages through a process of highly associative thinking.

Rather than holding me back, however, this photorealistic thought process has been a great asset in my work as a scientist and designer of chutes and pens for handling cattle. It enables me to build and conceptually test the cattle equipment that I invent in my mind. When I read...

Too often, however, when my way of thinking appears in young science students, it is seen as something that needs to be corrected. I am concerned that our educational system is blocking photorealistic visual thinkers like me from careers in science. Instead, we should encourage diversity in modes of thinking so that we aren’t losing the special talents of people who might contribute greatly to research and development by offering unique perspectives.

In my latest book, The Autistic Brain, I explore different types of visual thinking, from thinking like mine, which relies on object imagery and is common to many people with autism, to thinking that uses spatial imagery. Object-imagery thinkers envision the literal appearances of individual items—their form, size, shape, color, and brightness—and spatial-imagery thinkers visualize the spatial relations among objects in a more abstract way. Research has shown that these different kinds of thinking use different areas of the brain, with object imagery activating the early visual cortex and spatial imagery activating the superior parietal cortex.

People who are object-imagery thinkers are very good at seeing visual detail, and they will do well on “grain-resolution tests.” In these tests, subjects determine which object has the greatest number of units in a given area—for example, the number of holes between the strings in a tennis racket’s face versus the number of grapes in a similar area. I did extremely well on this test, even though math is not my strong suit. The spatial-imagery thinker, on the other hand, typically does well on “mental-rotation tests,” which involve imaginatively rotating pictured objects in space. Maria Kozhevnikov of Harvard University has done extensive studies to document these two kinds of visual thinking and has shown that professional scientists tend to do best on mental-rotation tests, while artists score best on grain-resolution tests (Cognition, 117:276-301, 2010).

In addition to enabling me to visually test-run ideas for experiments in my mind, relying on object imagery gives me exceptional powers of observation. In my early work with cattle, for example, I noticed that they often refused to walk over shadows or enter dark places. I found that installing lights in the alleys of processing plants improved cattle movement. Science needs my kind of mind to think up new ideas or to consider new angles for doing experiments.

Traditionally, people with more math-oriented minds who rely on spatial imagery have been attracted and encouraged to pursue careers in science. I am worried that educational barriers will make it harder and harder for brilliant people who do poorly in mathematics to make contributions to science. One time I visited a fantastic fish research lab with innovative equipment that assisted the scientists with their work. All the equipment in the lab had been built by the maintenance man. We need to create pathways for creative object-imagery thinkers to make significant contributions in science. 

Temple Grandin is a professor at Colorado State University. She is the author of six books, including the national bestsellers Thinking in Pictures and Animals in Translation, and is a past member of the board of directors of the Autism Society of America. Read an excerpt of The Autistic Brain.