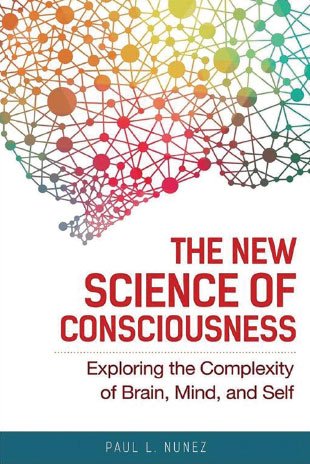 PROMETHEUS BOOKS, NOVEMBER 2016Ever since I switched my research focus from theoretical physics to neuroscience many years ago, my professional life has focused on the “easy problem” of consciousness—exploring relationships between brain activity and mind. So-called signatures of consciousness, such as increased blood oxygen or electrical activity patterns in different brain regions, are recorded using several different imaging methods, including electroencephalography (EEG) and functional magnetic resonance imaging (fMRI).

The “hard problem”— how and why neural activity produces our conscious awareness—presents a much more profound puzzle. Like many scientists and nonscientists alike, I have a long-running fascination with the mystery of consciousness, which serves as the inspiration for my latest book, The New Science of Consciousness.

A new approach to studying consciousness is emerging based on collaborations between neuroscientists and complexity scientists. Such partnerships encompass subfields of mathematics, physics, psychology, psychiatry, philosophy, and more. This cross-disciplinary effort...

I recruit a number of analogies and metaphors, showing how brain behavior can be compared to the collective behaviors of other large-scale systems. Our global social system, for example, harbors novel features such as wars and economic depressions that emerge though they are absent from the small component parts. Similarly, many scientists believe that consciousness emerges from brain networks. But how is this possible?

My approach to both the easy and hard problems rests on the following conceptual framework, which is consistent with mainstream science: (1) human brains and minds are correlated; that is, many consciousness signatures have been discovered; (2) human brains and those of many other species are genuinely complex systems; (3) brains, like other complex systems, consist of nested hierarchies of subsystems that operate at different levels of organization (spatial scales); (4) accordingly, signatures of consciousness are observed over a wide range of scales; (5) multiple conscious, unconscious, and semiconscious entities coexist within each human brain; (6) interactions between these subsystems contribute substantially to making the human brain human.

This conceptual framework supports an idea called “the multiscale conjecture,” which posits that consciousness manifests at multiple levels of brain organization, from confined neural networks to large brain regions, and no single scale need be special. Thus, the various dynamic patterns of information observed as consciousness signatures may all contribute to the mind. In this view, consciousness is rooted in the dynamic patterns of multiple interacting scales.

Although fully consistent with peer-reviewed research, the multiscale conjecture allows room for both reductionist and nonreductionist interpretations. I approach the consciousness challenge with questions about a category beyond ordinary information—that is, ultra-information—defined broadly to include ordinary information, hidden physical processes, and consciousness. Thoughts, emotions, self-awareness, memory, and the contents of the unconscious are, by definition, categories of ultra-information whether or not these mental processes also involve ordinary information. This idea is fully consistent with modern physics, which tells us that some kinds of information are fundamentally unknowable. For example, all interpretations of quantum mechanics rely on the existence of some sort of hidden reality that we can never observe directly, but that nevertheless influences the familiar world that is available to our senses. This hidden reality has been given a number of fancy labels, including wavefunction collapse, many worlds, multiverse, implicate order, coherent histories, and more. By my definition, this hidden world contains ultra-information. Many have speculated that consciousness is somehow related to such hidden reality, but it appears that nobody really knows how this might occur.

Paul L. Nunez is an emeritus professor of biomedical engineering at Tulane University and heads the small consulting firm Cognitive Dissonance LLC. Read an excerpt from The New Science of Consciousness.