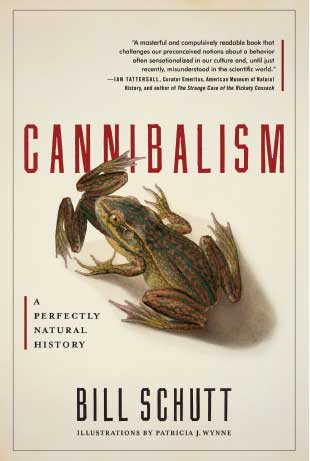 ALGONQUIN BOOKS, FEBRUARY 2017The golden hamster (Mesocricetus auratus) is a popular children’s pet, but these cuddly fuzz balls are also known to display some nightmarish behavior in captivity—namely, cannibalism. Although it might be difficult for a parent to explain this to a child traumatized by the sight of a brood of “pinkies” being eaten by their mom, or the discovery of a half-consumed corpse of an adult hamster, the behavior is a typical response to a myriad of stress-related conditions. These stem from major differences between the animal’s natural habitat (subterranean burrows in a dry desert environment) and captive conditions, where pets are typically housed in fish tanks carpeted in damp wood shavings, or in trendy modular contraptions in which see-through plastic tubes link “rooms” to each other. Add this to the fact that adult hamsters in the wild are solitary, highly territorial, and only...

Until relatively recently, scientists believed that the cannibalism seen in species such as hamsters, black widow spiders, and praying mantises was a product of either the stresses associated with captivity or a lack of alternative forms of nutrition (think the Donner Party). In the 1970s and 80s, however, researchers such as Laurel Fox and Gary Polis learned that not only was cannibalism widespread in nature, it was related to completely natural phenomena, including sexual selection and variable environmental conditions. In my new book Cannibalism: A Perfectly Natural History, I explored the practice across the animal kingdom with an eye toward why it occurs. Viewing the phenomenon through the lens of modern biology, it became possible to examine some of the most famous examples of human cannibalism in a new light—as perfectly natural behavior. One such form of cannibalism-related behavior can be considered the ultimate parental care. A day after her spiderlings hatch, the mother black lace-weaver spider (Amaurobius ferox) lays a clutch of trophic eggs, whose only role is to serve as food for her hungry babies. Three days later, after the trophic eggs have been consumed, the spiderlings are too large for their mother to care for, but they are still in dire need of nutrition. In response, the mother spider calls the babies to her by drumming on their web and presses her body down into the gathering crowd. The ravenous spiderlings swarm over their mother’s body. Then they eat her alive, draining her bodily fluids and leaving behind a husk-like corpse.

Cannibalism as parental care also extends into the vertebrates, and a fascinating example occurs in the caecilians—a small order of legless amphibians. In 2006, caecilian experts were studying an African species that researchers had previously observed guarding its hatchlings. On numerous occasions, scientists had observed a female sitting motionless while her newly hatched brood slithered energetically over her body. On closer inspection, they saw that the babies were pressing their heads against the female’s body, then pulling away with her skin clamped tightly between their jaws—peeling off the outer layer of their mother’s skin like a grape’s, then eating it. Scientists now know that these bouts of “dermatophagy” reoccur regularly and that the mother’s uniquely fat-laden epidermis (which endures multiple peelings) serves as the young caecilians’ sole source of nutrition for up to several weeks. It also explained why the babies increase significantly in size while mothers suffer a concurrent decrease in body mass. In short, dermatophagy is a great way to fatten up the kids, but for moms on the receiving end of their gruesome attentions, the price is steep.

As I explored the phenomenon of cannibalism from a biological and zoological perspective, both in my own research and as a book author, I encountered dozens of similarly interesting stories—each leading me to the same conclusion: eating one’s own kind is completely natural behavior for thousands of species, perhaps even for humans.

Bill Schutt is a professor of biology at Long Island University-Post and serves as research associate in residence at the American Museum of Natural History. Read an excerpt of Cannibalism: A Perfectly Natural History.