A few months before SARS sparked major outbreaks in several countries in early 2003, there were a series of small clusters of infection in Guangdong province, in southern China. Between November 2002 and January 2003, seven clusters were reported in Guangdong, ranging from one to nine cases in size. Based on the scope of these outbreaks, researchers later estimated that the reproduction number—R, which is defined as the average number of new infectious caused by a typical case—may have been around 0.8 during this period. However, by the time the first major outbreak occurred in Hong Kong a couple of months later, SARS had an R of more than 2. 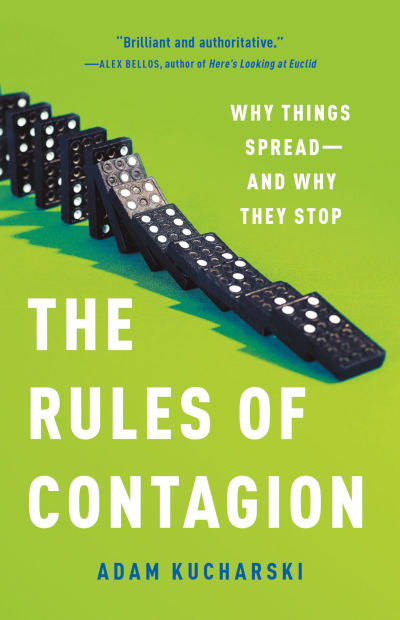 There are several reasons the R of an infection may increase, and we can understand them better by breaking transmission down into four main components. Consider the steps that lead an infectious person to spread the infection to others. It depends on A) the duration of time someone is infectious, B) the opportunities for transmission during this period (such as social interactions), C) the transmission probability during each opportunity (such as whether someone coughs or sneezes), and D) the probability that the person on the other end of the interaction is susceptible to that infection. I like to call these four things the DOTS for short, and if we multiply them together we get the value of the reproduction number:

For example, if a case is infectious for a week on average (i.e. duration), interacts with around five new people per day (i.e. opportunities), has a 5 percent chance of infecting each of these contacts during an interaction (i.e. transmission probability), and everyone is susceptible, we’d expect 7 x 5 x 0.05 x 1 = 1.75 secondary cases on average.

As I explain in my latest book, The Rules of Contagion, for infectious diseases, each of the DOTS can influence the extent of contagion. One 2016 study estimated that viruses that transmitted successfully among humans tended to cause longer infections (that is, larger duration value) and spread directly from one person to another, rather than via a secondary source (that is, more opportunities). Transmission probability can also make a difference; avian influenza viruses, such as H5N1, have struggled to gain a foothold in people because they can’t latch onto the cells in our airway as easily as human viruses can. That’s why there was concern in 2011, when teams at Erasmus Medical Center and the University of Wisconsin–Madison announced that they had each created new strains of H5N1. Among other changes, mutations in these viruses could make them more capable of infecting the easy-to-access upper portion of the mammalian airway. Unlike circulating avian influenza viruses—which had only spread between humans who’d come into close contact with each other—these mutant versions could go airborne, successfully spreading between ferrets in the lab. An increase in susceptibility can also nudge the reproduction number higher, such as when vaccination coverage falls for diseases such as measles, which means outbreaks may follow.

As well as understanding how infections spread, the DOTS can provide insights into how we might control them. In the case of HIV, for example, treatment can reduce the duration of time someone is infectious, and fewer sexual partners can reduce the number of opportunities for transmission. The latter generally isn’t an appealing option for most people, so health agencies have instead encouraged people to use condoms, which reduces the transmission probability during sexual encounters. In recent years, there have also been successful programs of pre-exposure prophylaxis, whereby HIV-negative individuals take anti-HIV drugs to reduce their susceptibility to infection.

For SARS-CoV-2, there isn’t yet a way to reduce susceptibility other than through natural infection. Even with infection, the duration of subsequent immunity remains unclear. This means control measures have focused on decreasing the effective duration of infectiousness (by isolating people with symptoms and quarantining their contacts), the number of opportunities (by reducing social interactions), or limiting the probability of transmission with personal protective equipment. Just as there’s not a single component of transmission that made the COVID-19 pandemic take off, there won’t be a simple solitary measure that will keep SARS-CoV-2 under control in the long term. To prevent large future outbreaks, countries will have to connect together measures that can target several of the DOTS.

Adam Kucharski is an associate professor in the department of infectious disease epidemiology at the London School of Hygiene and Tropical Medicine.

Correction (January 4, 2021): In a previous version of this story, R0 was mistakenly used instead of R in some instances. This has been corrected. The Scientist regrets the error.