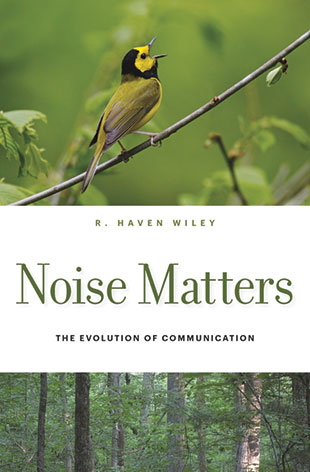 HARVARD UNIVERSITY PRESS, JUNE 2015Most of us have always felt that we tell the truth—or at least decide when to or not. Linguists, engineers, and most biologists have also always taken honesty for granted when studying communication. At one time, students of animal behavior did so, too.

Several decades ago, though, developments in evolutionary biology challenged this assumption. Communication might have evolved to be manipulative instead of honest. Natural selection should produce signals that maximize the spread of a signaler’s genes in a population, so signalers might evolve to provoke responses that benefit themselves regardless of the consequences for receivers. For instance, the songs of hooded warblers (Setophaga citrina) in a forest in eastern North America might have evolved to elicit mating by females, even if deceptive songs seduce a female against her best interest.

In subsequent decades, animal behaviorists have attempted to find a convincing...

Another explanation for the evolution of honesty comes from the interdependence of signalers’ and receivers’ benefits. Signalers and receivers should cooperate to obtain the mutual advantages of honest signals. Yet, as now realized, cheaters can invade and overwhelm cooperative populations, unless special conditions are met. Something is missing for a general explanation of how honest communication evolves.

As explained in my recent book, Noise Matters: The Evolution of Communication, noise changes the way we must think about the relationship between signalers and receivers. We tend to think of noise as extraneous sound or spurious data but the ultimate effect of noise (and the only basis for measuring it) is error by receivers. Those errors can result from intentional deception by the sender, distortions of the signal between sender and receiver, or unpredictability in the nervous systems of the sender or the receiver. Regardless of the source of the noise, any receiver in the presence of noise faces an inevitable trade-off when optimizing its performance. This trade-off, as described by signal detection theory, precludes error-free performance by a receiver.

The combination of the receivers’ trade-off and the signalers’ costs results in the evolution of honesty as a stable feature of communication in noise. In the presence of noise, signalers and receivers evolve to a joint optimum, an equilibrium at which each does the best it can, provided the other does so also. At this point, communication is usually honest, but deception or manipulation is always possible. Both parties usually benefit, but sometimes a signaler or a receiver is manipulated. Each party might do better by manipulating its partner more, but, unlike the joint optimum, these deviations are not stable. Honesty is the normal outcome for the evolution of communication in noise, along with some manipulation.

This new approach has far-reaching consequences. For instance, in the presence of noise, exaggerated signals might evolve in many contexts—including, but not limited to, mate choice—and they should evolve specifically in ways that reduce, but never eliminate, the effects of noise. Notice that communication in noise does not evolve to escape noise.  Noise is inevitable.

R. Haven Wiley is a professor emeritus of biology and of ecology and environment at the University of North Carolina at Chapel Hill. Read an excerpt from Noise Matters at www.the-scientist.com.