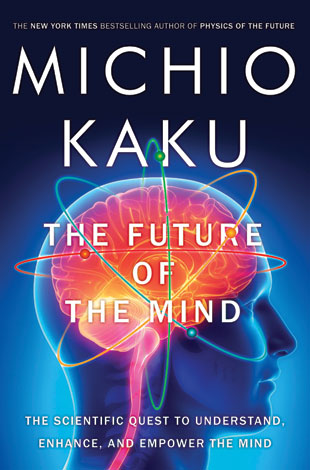 DOUBLEDAY, FEBRUARY 2014I was drawn to science, even as a child, in part by a fascination with science fiction, especially the genre’s treatment of telepathy, telekinesis, cyborgs, uploading memories, etc. But in the real world, the inner workings of the brain have long been obscured, seemingly beyond the reach of science. It is to these mysteries that I turn in my latest book, The Future of the Mind.

Within the past few decades, largely because of advances in physics, an avalanche of new experimental tools has revealed some of the most intimate details of the human mind. Magnetic probes can safely deaden a specific region of the brain, making it possible to discern that region’s function. By inserting a gene into a specific population of neurons that makes them fluoresce when they fire, one is able to light up neural routes in the brains of living animals...

These advances have spurred President Barack Obama and the European Union to collectively allocate more than a billion dollars to reveal every neural pathway of the human brain. Like the Human Genome Project, this new program could revolutionize medicine.

Progress in this area has been remarkable: at Brown, Duke, and Johns Hopkins Universities, as well as other institutions, one can connect a brain directly to microchips to mentally control mechanical arms, play video games, operate household appliances, and write e-mails, even if the body is totally paralyzed.

At the University of California, Berkeley, and the ATR Computational Neuroscience Laboratories in Kyoto, scientists have scanned the brain using powerful functional-MRI machines, breaking down the organ’s blood-flow changes—an indirect indicator of electrical activity—into tens of thousands of dots, in order to create a computer-generated image of a thought. In this way, when  a subject looks at an animal or a person’s face, computers can process the fMRI data to re-create a computer-generated image of that animal or face.  Preliminary work is even being done to “read” the content of a dream directly from brain activity, once thought impossible.

In Japan, the carmaker Honda has even connected its robot ASIMO to a person wearing EEG sensors, allowing the human to control simple movements of the machine. In the distant future, these “surrogates” may revolutionize industry and the space program. Instead of astronauts risking life and limb to travel into deep space, they might mentally control robots exploring the moon from the comfort of a NASA control room.

But if the dream of locating every neural pathway of the brain succeeds, does it mean one can create a Brain 2.0, a carbon copy of our brain? If so, will it possess consciousness? And will this consciousness survive even after we are dead, creating a novel breed of immortality?

And even further into the future, if the complete connectome of our brain can be coded onto a disk, it raises the possibility that centuries from now this mass of information can be beamed into the heavens on lasers, essentially allowing consciousness to explore the universe. Clumsy chemical rockets could be replaced by pure consciousness traveling at the speed of light.

In this way, one can even assign a number to the level of one’s consciousness, by counting the number of feedback loops involved at each level. The advantage of this definition is that it is testable, reproducible, falsifiable, and also quantifiable.

So it is gratifying that, within my own lifetime, many of the dreams of science fiction are on their way to being realized in the laboratory.

Michio Kaku is a professor of theoretical physics at the City College of the City University of New York. He is the author of several books, including two New York Times best sellers.