Not only is the humble fluid a boon for keeping humans cool, it also contains a wealth of biological information.

If you tallied up all the sweat glands of every human currently on Earth, you’d get a number in the quadrillions, more than there are stars in the Milky Way. Like our big brains and near nakedness, the bountiful activity of these sweat glands—sprinkled across our skin like stars in the night sky—helps distinguish humans from the rest of the animal kingdom. Yet instead of celebrating the sophisticated temperature control system embedded in our own skin, many of us contribute to the $75 billion deodorant and antiperspirant industry that aims to erase evidence of our hardworking pores.

In writing a book on the science of sweat, I surprised myself by becoming a person who gives perspiration pep talks. I guess there’s no doubt where I stand on the topic when my book is called The Joy of Sweat.

But I was not always so enamored with sweat; low-level anxiety that I might sweat more than average helped inspire my curiosity about perspiration in the first place. In my quest to learn about the science and stigma of sweat, I figured I should start by scrutinizing myself. An obvious first step was tallying my own sweat glands. To my delight, Andrew Best, a biological anthropologist at the University of Massachusetts, Amherst, kindly offered his sweat gland census services, which, intriguingly, would require mild electrocution and a polymer typically used for making impressions of ear canals. 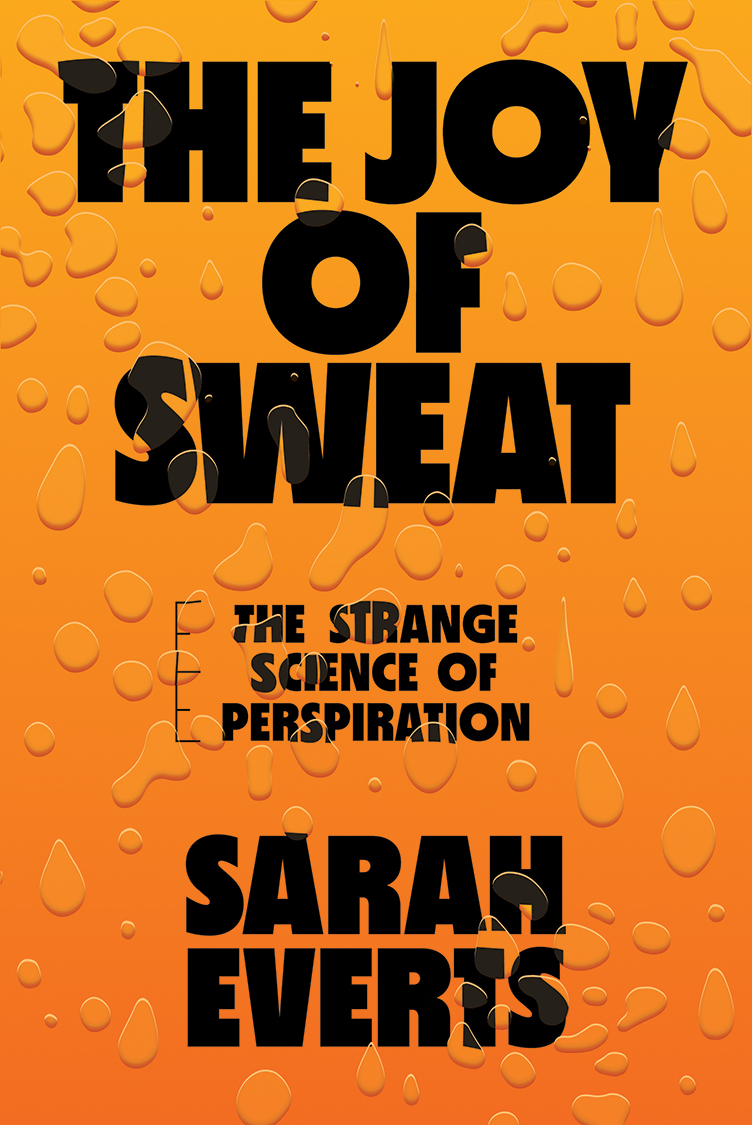 If you crack open a dermatology textbook, you’ll likely read that each human has between 2 million and 5 million eccrine sweat glands spread across the body—although some put the low end at 1.5 million. Eccrine sweat glands are the ones responsible for dispatching salty liquid to our skin’s surface so that its evaporation can whisk away body heat. They should not be confused with apocrine sweat glands, whose waxy extrusions help turn armpits into stink zones at puberty.

The efficient temperature control system provided by our millions of eccrine sweat glands has allowed us to chase our prey to death (or, in modern times, run marathons) and navigate sweltering climates during the hottest part of the day when many other mammals must stay in the shade to survive. Death by heat stroke is a miserable way to die, and evaporative cooling is the most efficient way of dispatching body heat. Given the other bodily fluids available for evaporative cooling, sweat is arguably preferable: honeybees rely on vomit to evaporate away their body heat, seals pee on themselves, and vultures deploy liquid poop to their scrawny legs to cool down. By contrast, humans have millions of microscopic devices in our skin—at the ready, all the time—to control heat surges with sweat.

Some of the first human sweat gland tallies were conducted decades ago using cadaver skin. Researchers excised sections of skin from representative areas of the body—forehead, thigh, torso, buttocks—did some histological staining, and counted sweat glands. From the density of these glands in various skin regions, researchers came up with an overall tally. But there’s a caveat with cadaver skin: there’s no way to tell how many of those glands are actually functional. Eccrine sweat glands are formed in utero, sometime between 20 and 30 weeks of gestation. But the glands only become fully active in the toddler years, and some never do.

Scientists aren’t exactly sure what triggers this maturation, nor ultimately why some of us are, frankly, sweatier than others. It’s probably a mix of nature and nurture. Clearly, genes code for the expression and regulation of sweat glands, and some families are sweatier than others. But is this because some people have more sweat glands? Or do they have very productive and active sweat glands? And what dictates how efficiently these glands respond to rising temperature? 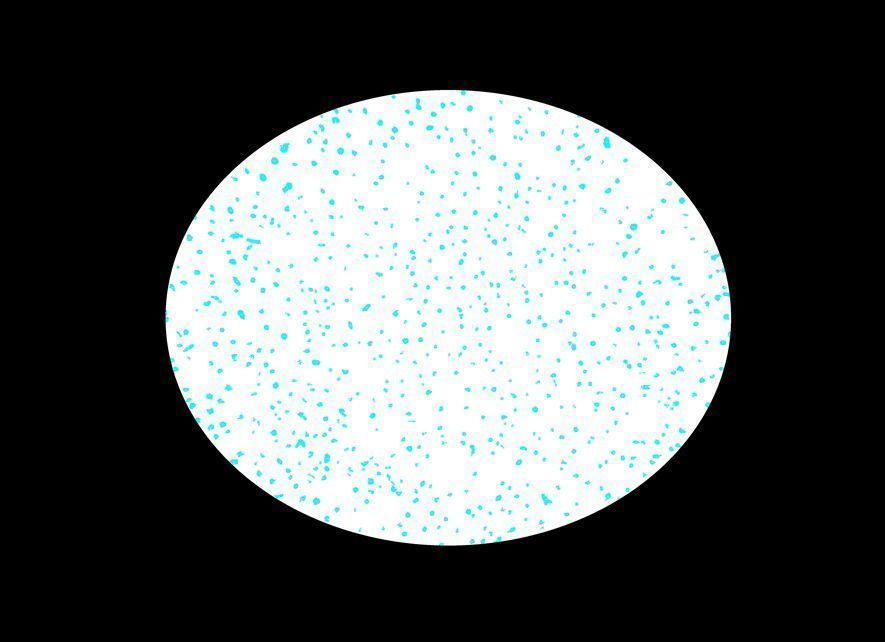 Best and his collaborators wonder whether the climates people grow up in might play a role in how many sweat glands ultimately become active. They are particularly curious about the formative years when sweat glands become functional. Here’s where the polymer comes in. The researchers place it on the skin of their study subjects, and the outward flow of sweat leaves circular impressions that can be counted with a digital camera when the polymer is removed.

When Best set out to count my eccrine sweat glands early in 2019, he selected representative places on my body and applied what looked like fist-sized pancakes of flattened yellow silly putty. For the experiment to work, the outward flux of sweat needs to be strong enough to create a hollow in the polymer, so Best gave me a topical drug called pilocarpine to thrust open the sweaty flood gates. He placed little gels of pilocarpine on various areas of my body—my back, my forearm—and then hooked me up to an electrical circuit. I could feel a pleasant buzz of current pushing the drug into my pores so that they’d open up to be counted.

As we waited for the pilocarpine to take effect, Best and I discussed how scientists have shortchanged sweat, at least compared to other bodily fluids. Consider urine: there’s an order of magnitude more published papers in PubMed on human pee than on human perspiration. Neither urine nor sweat require invasive techniques to collect. Although urine is certainly a fascinating indicator of what our body purges, eccrine sweat provides a window into what’s taking place inside, because it comes from interstitial fluid, which is sourced from blood. 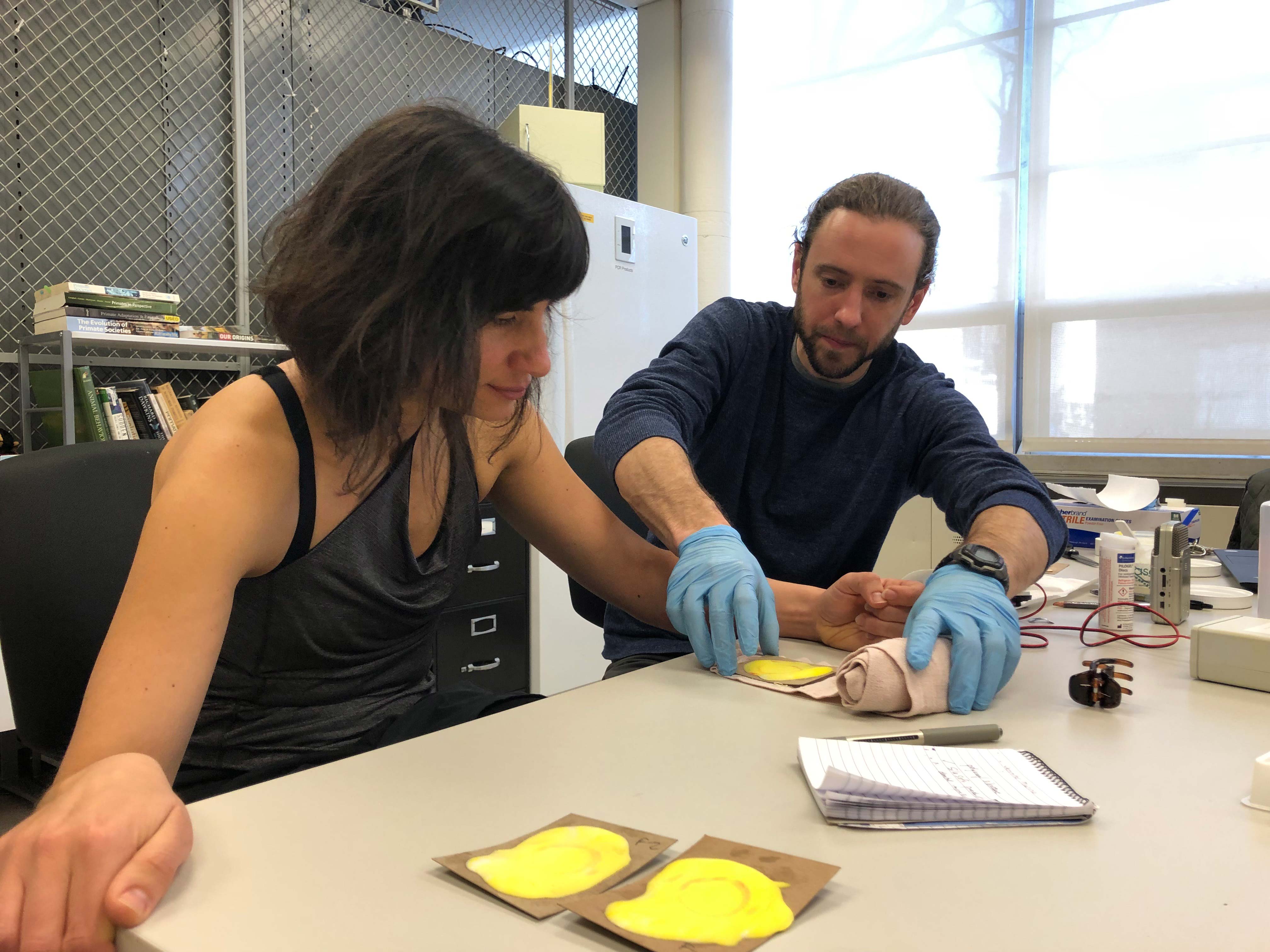 There is a gold mine of secrets to be discovered in sweat about our health—and our vices. If you sampled my sweat, you would certainly find traces of my morning coffee. Had I added a shot of whiskey to my breakfast brew, or snorted some cocaine, evidence of these activities would percolate out too.

In recent years, analytical technology has become sensitive and accurate enough to track these secrets. Electronic engineers are trying to design all sorts of ways to monitor what’s coming out of our sweat pores, with myriad potential applications, from warnings that we’re too drunk to drive to alerts for coaches when an athlete is producing stress chemicals and needs to be switched out for a fresh player.

Yet many fundamental mysteries about sweat biology still remain. I don’t mean to imply that scientists haven’t studied sweat—I found more than enough to fill a book. But in this genomic era, we still don’t know exactly how many genes are involved in sweat gland development and function. Other sweaty mysteries are also ripe for further investigation, including the pathogenic origin of a sweating pandemic that hit England in the 16th century and the origins of hyperhidrosis, a debilitating excessive-sweating condition faced by millions. As I waited for a tally of my own body’s sweat glands (just under 3 million, it turned out), I concluded that sweat needs a lot less side eye—not just from the public but from scientists too.

Sarah Everts has written for Scientific American, Smithsonian, New Scientist, and The Economist. She teaches journalism at Carleton University.