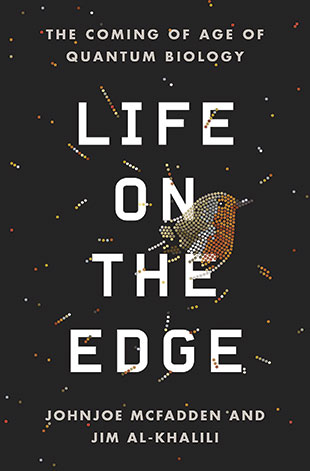 CROWN, JULY 2015Why is life so different from the inanimate stuff all around us? An early idea called vitalism posited that life was animated by forces not found in nonliving matter. But the discovery that biomolecules were just complex organic chemicals pretty much discredited this notion. By the 20th century, most scientists agreed that life was just a system of extraordinarily complex chemical reactions operating according to thermodynamical principles. The same mechanisms that drove steam trains sustained life.

When Newtonian mechanics was upturned by the new quantum mechanics, a powerful set of mathematical rules and ideas describing the behavior of atoms and smaller particles, most biologists continued to cling solely to classical physics to describe processes at the molecular level. Two of the founding fathers of quantum mechanics, Pascual Jordan and Erwin Schrödinger, weren’t convinced that thermodynamics could account for life. Jordan claimed that life’s dynamics are unique,...

But were they right? When Watson and Crick uncovered the basic structure of genes, they found that structure was indeed a quantum mechanical entity: a double-stranded bimolecule of DNA. Quantum-level entities, such as atoms, electrons, and protons, encode and direct life’s information, just as Jordan and Schrödinger predicted. We detail the dawn of quantum biology in our new book, Life on the Edge.

Recent advances in technology have enabled the examination of living systems at a truly molecular level, and life’s quantum mechanical behavior is becoming clearer as a result. In 2006, Graham Fleming and Greg Engel at the University of California, Berkeley, were studying photosynthesis. The energy from sunlight being transported through the complex of chlorophyll molecules should be inefficient, as it would mostly take the wrong route and never reach the reaction center where it could be put to chemical use.  But the actual efficiency can be very close to 100 percent, which was a puzzle. The researchers fired lasers at photosynthetic complexes and examined the emitted light. They discovered that the energy was released in regular pulses called a quantum beats, which indicated that the energy was travelling as a quantum mechanical wave following multiple pathways simultaneously, providing the extraordinarily high efficiency of the process.

Another place where quantum mechanical behavior has been found is in the action of enzymes. These complex biomolecules enable chemical reactions that would otherwise take thousands or millions of years to happen inside living cells in milliseconds. How enzymes achieve this has long been an enigma. Work in the 1970s suggested that respiratory enzymes work by promoting electron motion via another weird quantum trick called tunnelling, where particles vanish from one position and instantly rematerialize in another without visiting any of the in-between places. Recent research has shown that enzymes also promote tunnelling of protons. This form of quantum teleportation may play a vital role in the production of every single biomolecule on our planet. Scientists have also implicated quantum tunnelling in the detection of odor molecules and in a type of mutation that is caused by proton motion within the DNA molecule.

The quantum world has been implicated in several other biological phenomena. For example, there is evidence that some migratory birds navigate by sensing the Earth’s magnetic field using quantum entanglement, whereby separated particles remain quantum-connected.

The biggest question is how living systems manage to maintain delicate quantum states in warm, wet cells, where they would be expected to vanish extraordinarily quickly due to random molecular vibrations. The latest research suggests that life, paradoxically, uses molecular vibrations to maintain quantum coherence inside its cells. Maybe this is why life is different from all the inanimate stuff: good vibrations keep us on the edge of the quantum and the classical worlds.

Correction (August 24): The original version of this article misstated the publication date of Erwin Schrödinger's book, What is Life? The mistake has been fixed, and The Scientist regrets the error.

Johnjoe McFadden is a molecular geneticist and Jim Al-Khalili a theoretical physicist, both at the University of Surrey in the U.K. Read an excerpt of Life on the Edge: The Coming Age of Quantum Biology.