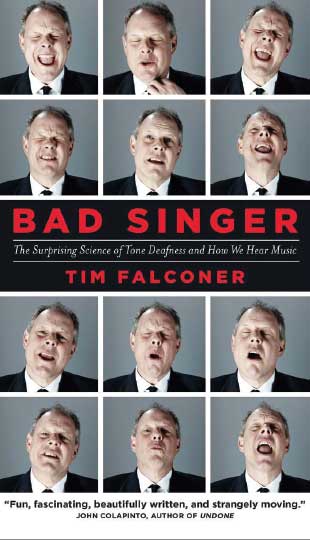 HOUSE OF ANANSI, MAY 2016I’ve spent my career bothering people. As a journalist and author, I hang around and watch what folks do, and I ask too many questions, some better than others. Later, I have follow-up queries and clarification requests, and I bug them for those stats they promised to provide me. But something different happened when I started researching congenital amusia, the scientific term for tone deafness present at birth, for my new book, Bad Singer. The scientists were as interested in me as I was in them.

My idea was to learn to sing and then write about the experience as a way to explore the science of singing. After my second voice lesson, I went to the Université de Montréal’s International Laboratory for Brain, Music, and Sound Research (BRAMS). I fully expected Isabelle Peretz, a pioneer in amusia research, to say I...

“So this means what?” I asked.

“We would love to test you more.”

The BRAMS researchers weren’t alone. While still at Harvard’s Music and Neuroimaging Lab, Psyche Loui—who now leads Wesleyan University’s Music, Imaging, and Neural Dynamics (MIND) Lab—identified a neural pathway called the arcuate fasciculus as the culprit of congenital amusia. So I emailed her to set up an interview. She said sure—and asked if I’d be willing to undergo an fMRI scan.

And I’d barely started telling my story to Frank Russo, who runs Ryerson University’s Science of Music, Auditory Research, and Technology (SMART) Lab in Toronto, before he blurted out, “Sorry, I’m restraining myself from wanting to sign you up for all kinds of research and figuring what we can do with you.”

I’m an unusual amusic because I love music—many fellow sufferers are indifferent or actively dislike it—and I wanted to learn to sing. Since I hadn’t had a lesson in six months, Russo suggested I restart my training while his lab tracked my progress.

I’d listen to two tones and then sing them and say if the second was higher or lower than the first. I also had to deliver several renditions of “Happy Birthday,” a song I soon learned to hate.

After seven months, my ability to match pitch hadn’t improved (though in my lessons, I typically matched my vocal coach’s notes, because it’s easier to copy a human voice than an instrument). But something weird was going on: if, say, the second note was higher, I’d often sing the two sequential notes in the right order, but then confidently say the second was lower. This supported the theory that amusics actually can hear pitch, but they don’t have conscious access to that information.

As for “Happy Birthday,” I wasn’t hitting all the notes, but my pitch improved slightly, and my rhythm was much better. More important than these data points, because so much of music perception evades measurement, Russo invited 14 musicians to listen to and score randomized versions of me singing “Happy Birthday,” and they could hear my progress.

Later, Russo and Peretz combined their research to write about me for Neurocase, a journal devoted to neuroscience case studies (22:526-37, 2016). Reading “Effects of vocal training in a musicophile with congenital amusia” was an odd experience. Although I’ve read about myself before (book reviews, interviews, and so on), this was all so . . . clinical.

Peretz and Russo had shared most of the results, at least in a general sense, when I was writing the book, but this was more detailed. And some of the information was new to me. For example, I was fascinated that a brief personality assessment questionnaire—which I don’t remember taking—fairly accurately predicted my musical tastes (indie rock, alt-country, country, blues, R&B, and reggae).

Still, the conclusion that the limited improvements in my singing were “transient” was disappointing, even though I was already painfully aware that was true.

So, with no singing career in my future, I’ll stick with my day job and continue to ask questions for a living. But it was fun being studied for a change, and at least the researchers had called me “a remarkable case.”

Tim Falconer is an award-winning journalist and author of four books of nonfiction. He mentors creative-nonfiction writers in the MFA program at the University of King’s College in Halifax, Nova Scotia, and is an editor in the literary journalism program at Alberta’s Banff Centre for Arts and Creativity.