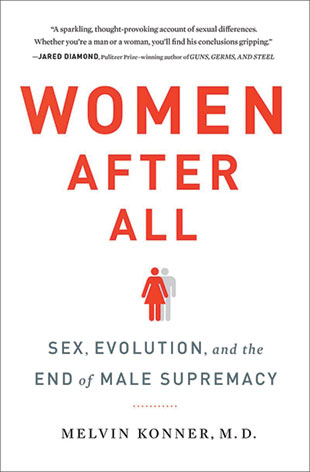 W.W. NORTON & COMPANY, MARCH 2015Since life began, males have been a sort of addendum. The earliest organisms were, in a real sense, female—producing new individuals from their own bodies. Sex, although very old, was an afterthought, perhaps derived from other ways of exchanging and shuffling DNA, any of which foiled parasites by increasing variation. Ever since sex, there has been an almost inevitable tension between male and female.

In many species females prevail. Komodo dragons can reproduce parthenogenetically if there are no males around, and whiptail lizards have done away with males altogether, instead engaging in female-to-female intercourse that triggers gestation. Human-size flightless cassowary females dominate diminutive males and fight  to form a harem of doting dads who bring up the young while the female waddles on to her next conquest. Praying mantis males keep copulating after their beloveds have eaten their heads, and tarantula females...

Like a spent spider, the human male has a tenuous future, and as I argue in my latest book, Women After All, we’re ushering in a new era of gender equality.

Primate species can go either way. Among lemurs, even the lowest-ranking female cows the highest-ranking male. In marmosets, fathers lug around weighty twins that only go to the mother to nurse. Our two closest relatives, chimpanzees and bonobos, have contrasting mating systems. Chimp males are brutal to each other and to females, while bonobos’ female coalitions—sealed by the obviously delightful rubbing of vulvas—keep males in line.

In our species, culture, more than genes, has shaped gender roles. For at least 90 percent of human history, we lived in small seminomadic bands where decisions were made around the fire. Studies of extant hunter-gatherers show that men could not exclude women even if they wanted to.

But when our nomadic ancestors settled down, agriculture blossomed, and face-to-face life yielded to hierarchies, armies, priesthoods, and separate private and public spheres. Now women were excluded, oppressed, and drawn or dragged toward strongmen who had multiple wives and concubines. This was the human story for 12,000 years, and a mere two millennia of nominal monogamy hasn’t budged gender inequity much.

But that is changing. As the value of males’ brute strength wanes, technology is leading us back to our fairly egalitarian hunter-gatherer origins. In the modern world women are naturally superior. They have longer lives and fewer deaths at all ages; very few X-linked genetic problems; much lower susceptibility to autism, attention deficit, hyperactivity, and conduct disorders; and they are far less violent and sexually voracious—male bents that have led our species astray for thousands of years. In business and politics, women are better cooperators, less conflict-prone, a lot less likely to let sex interfere with their work, and much better at getting their own egos out of the way.

Androgens shape the male brain in utero, and the behavioral effects are lifelong. In 1869, suffragist leader Elizabeth Cady Stanton said, “The male element has held high carnival” too long, and “the difference between man and woman” is the strongest reason for gender equality. We are past the myth that men and women are the same, and the reality of the difference, as women are empowered, will make a better world.

Our species will soon take greater control of its evolution. Women could blend their DNA and cut men out in the near future, but most don’t seem to want to. Instead, we can use our new powers—biotechnology, robotic brawn, vast online knowledge at our fingertips, and ever-present social media—to restore the gender equality our species had for so many millennia, and while we’re at it, stop wasting half of humanity’s gifts.

Anthropologist and behavioral biologist Melvin Konner is the author of The Evolution of Childhood: Relationships, Emotion, Mind; The Tangled Wing: Biological Constraints on the Human Spirit; and Becoming a Doctor, among other books. He teaches at Emory University. Read an excerpt of Women After All.