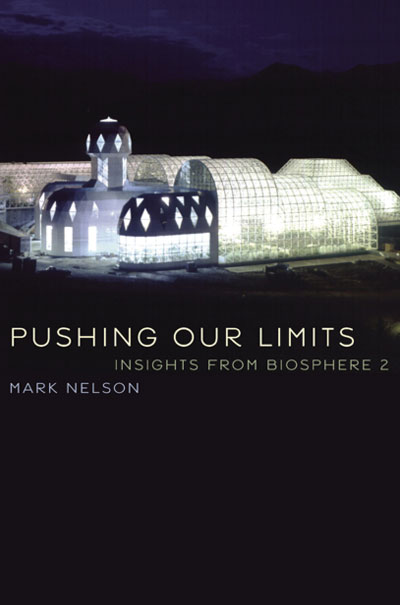 University of Arizona Press, February 2018 Now that the hyperbolic coverage of the early years of Biosphere 2—e.g. “. . . this facility is a nightmare . . .” or “It’s going to save the Earth and colonize space!”—has receded, it’s possible to reconsider what was learned from its operation as a materially closed ecological system facility that supported human habitation for about three years in total.

There has historically been tension and sometimes open hostility between those scientists engaged in detailed analytic work and scientists who study phenomena at larger scales. This is unfortunate, because both approaches are needed to understand ecology: there is so much still unknown both about basic biology and about how our biosphere functions. Although while the experiment was on-going, nearly three decades ago, Biosphere 2 elicited early criticism from some reductionists who didn’t appreciate its design, the project’s success depended on...

Biosphere 2 was metaphorically called a “cyclotron of the life sciences.” In a 3.14-acre space, packed with life and bounded by miniature models of the atmosphere and ocean, biogeochemical cycling was sped up hundreds to thousands of times.3,4

My responsibilities inside Biosphere 2 included managing the wastewater recycling system and fodder systems on our farm, and helping with research and operations in our wilderness biomes. Some of the striking developments during the closure experiments included maintenance of surprising biodiversity despite significant species losses and predation by a stowaway ant species5 because ecological designers had deliberately overstocked with more species than they thought would persist.6,7 One biome, the fog desert, self-organized toward chaparral rather than being dominated by its initial cacti and succulents. There was weakness in large trees because of reduced light, high CO2, and lack of stress wood (we could produce only gentle breezes inside), but vegetation grew rapidly, some trees growing from under 3 meters to over 10 meters within the span of two years. The farm produced 83 percent of food for the first crew and 100 percent for the second, shorter mission in 1994.8 The coral reef system survived the initial two-year habitation, but it required chemical buffering to maintain pH levels and even weeding of excess algae. Later studies with the Biosphere 2 coral reef proved landmarks in predicting the impacts of increased CO2 and ocean acidification in global climate change.9

A major surprise was very slow decline in atmospheric oxygen (demonstrating Biosphere 2’s extremely tight leakproofing), because of imbalance of system photosynthesis and respiration. Detailed investigation determined that oxygen was mainly absorbed in untreated concrete and soils.10 This allowed biomedical testing of the crew with regard to hypoxia despite no change in elevation, two factors that are normally inseparable.11 The constructed wetland wastewater treatment facility, which delivered recycled water to the farm irrigation system, worked extremely well, as did innovative approaches to air purification.12 Crew tensions were exacerbated by power struggles over project management, but we biospherians continued working together, united in our daunting task and appreciative of the fact that anything harmful to Biosphere 2’s health was also harmful to our own.13

I explore the scientific and public reverberations set in motion by Biosphere 2 in my recent book, Pushing our Limits: Insights from Biosphere 2. The project becomes increasingly relevant as we face unprecedented global environmental challenges.

The researchers involved with Biosphere 2 had no idea it would capture the world’s attention. When we started work on the project in the mid-1980s, even the term “biosphere” was obscure. But the public responds to visionary and real-time science. Biosphere 2’s central premises—that we need to learn how ecosystems operate, and that humans and our technologies, including farming, can be redesigned to integrate with the natural world—were inherently optimistic.14,8 Via live satellite uplinks, it’s estimated that as many as a billion people saw the September 1993 reentry to Earth’s biosphere at the end of the first two-year experiment.

Although there were downsides to being high-profile, it gave us the opportunity to educate the public. Public outreach and education were important parts of early planning for Biosphere 2. Students in countless schools in the US and abroad designed their own mini-biospheres; several K-12 and public education manuals and children’s books were spun out of the project, and the crew did live uplinks with school groups. Many classes took field trips to the Biosphere 2 facility in Arizona.

Biosphere 2 was controversial for a number of reasons. Anything thrust into the media spotlight is bound to attract naysayers. But there’s a saying among scientists: “No controversy, no cutting edge.” And Biosphere 2 was certainly cutting-edge. No one had ever before attempted to create an experimental facility with five different biomes inside, as well as a farm and all the engineering needed to support a mini-biosphere. Those elements—necessarily complex to study how ecosystems function, interact, and self-organize—are rarely combined in the same experimental facility.15,16

Rebecca Reider, who expanded her Harvard history of science thesis into her 2010 book Dreaming the Biosphere, observed that Biosphere 2 also ignited controversy because it violated some common assumptions, even taboos, about the scientific endeavor. One violation related to breaching the “neat intellectual boundary between humans and nature; it did not necessarily involve humans learning to live with the world around them.” Another cuts even deeper: Reider writes that “science was separate from art (and the thinking mind was separate from the emotional heart).”17  Life scientists know that their passion for understanding the workings of nature is often key to their work, and for researchers involved in Biosphere 2, their love of this new world and its rich biodiversity helped motivate careful management, collection of data on ecological self-organization, and the expansion of studies as opportunities arose. The overturning of dogma in this way needs to continue if we are to rise to the ecological challenges that result from humanity’s technological prowess and population numbers.

H. T. Odum, considered the father of ecological engineering and the cofounder of systems ecology, had long worked to get scientists engaged in the larger issues. He noted in a 1996 editorial published in Ecological Engineering that, like our global biosphere, Biosphere 2 had multiple scales of size interacting. Though all scales of science are important, large amounts of funding go to small-scale projects, and far less to experiments at the scale required to be relevant to understand biospheric functions. Larger-scale experiments are needed to test models and hypotheses at those levels of organization.

Odum and Bruno Marino, who served as the first director of research when Columbia University assumed operation of Biosphere 2 in 1995, edited the nearly two dozen papers in the 1999 book Biosphere 2: Research Past and Present. They noted in their introduction that it is time for more large-scale experimental ecological facilities like Biosphere 2. They suggested that cost might necessitate these facilities becoming national laboratories, serving as shared resources for the many disciplines involved in the Earth sciences.18

That was one of the visions behind Biosphere 2—that it would spawn numerous other laboratories for studying our global ecology and serve as a testing ground for eco-technologies that might improve the integration of technosphere and biosphere.12,19 For major universities to have and operate a sealed biosphere at some scale would add an important element to their research and education programs. Comparative biospherics is a new field that could complement comparative planetology as we learn about our place and destiny in the universe.

Designing Biosphere 2 required bringing diverse scientists and engineers together and getting them to communicate. The engineers had to design with the requirement to select equipment and materials that wouldn’t produce any byproducts that could harm the life inside. The technosphere was designed with one fundamental priority—to support life. We live in the Anthropocene, and this redesign of our technosphere needs to be part of a new paradigm to assist our transition to a healthy relationship with our planet.

I also gained personal insight by living in Biosphere 2 and helping it operate. The realization that our biosphere was keeping us alive and healthy was ever-present in such a small world. It became a visceral, organic understanding and was profoundly satisfying. We had to be regenerative farmers, researchers, technicians, and atmospheric stewards. The size of the facility’s biomes prevented “keystone species” (ones with a disproportionate impact on their ecosystems) from being included. So the biospherian crew had to fulfill that role—for example, harvesting grasses in our savannah, since we lacked grazing herds. We also intervened to defend biodiversity by pruning to ensure adequate light and controlling invasive species. Our love for our mini-biosphere was celebrated in poems, films, music, art, and in our own mindfulness while ensconced in the facility.

The endemic modern feelings of separation from the environment, such as “nature deficit disorder,” are harmful and can lead to widespread social dysfunction. The environment is not just something outside of us. We have fundamentally the same relationship with Earth’s global biosphere as I and the rest of the crew did in miniature with Biosphere 2. Our challenge as scientists and Earth biospherians is to fully realize and share that connection. And making that deep connection can guide our attitudes and actions toward our precious life-supporting world.

Mark Nelson is chairman of the Institute of Ecotechnics and was a member of the biospherian crew during the 1991–1993 first closure experiment.