A new book explores the ways that research findings are used and misused.

The speed of the COVID-19 outbreak has forced humanity to conduct research, craft policies, and make decisions at an unprecedented rate, outside of wartime. The pandemic has highlighted and amplified some of the cracks in these processes. I present evidence of these failings in my book, The State of Science. COVID-19 is truly a wicked problem. Because of its contradictory, incomplete, intertwined, and rapidly changing components, the pandemic seems resistant to resolution.

Epidemiologists have been predicting and preparing for a viral outbreak such as COVID-19 for many years. Live animal markets, which can act as viral mixing bowls; increased world travel; and population density have made a pandemic pretty much inevitable. Despite this, we weren’t ready. The combined budgets of federal agencies that might have funded and conducted research to better prepare the US for this situation—specifically the National Institutes of Health and the National Science Foundation—are only 7 percent of what the United States spends on defense. The country was prepared for terrorist attacks and war, but not SARS-CoV-2, the virus that causes COVID-19. In the United States, the pandemic has highlighted not only the lack of scientific knowledge among elected officials, but the devaluation of scientific expertise, as well as the consequences of budget cuts in government science agencies, including the Centers for Disease Control and Prevention.

A whole section of my latest book, The State of Science, is devoted to “bad science,” which is research mispresented for personal or political gain. During the pandemic, it has been more important than ever to get peer-reviewed information out quickly. But the peer-review process is not designed for quick turnaround times. The researchers most qualified to review virology, epidemiology, and modeling papers are working on COVID-19 projects and don’t have time to review papers. Preprint servers should have filled the void, but they were swamped by COVID-19 submissions. As the crisis grew initially, everyone was an expert, everyone wanted a slice of the pie, and there weren’t enough experts doing thorough quality control. These conditions resulted in a breeding ground for bad science and misinformation. 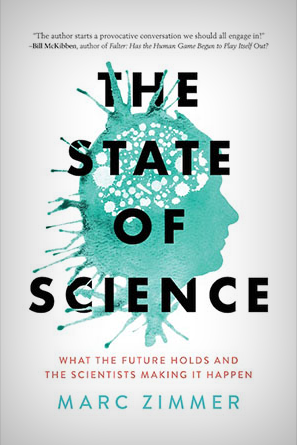 The internet has grown from one website in 1991 to more than 1.6 billion in 2018. We have instant access to more news and information than ever before. Neighborhood gossip has been magnified by websites and social media. Manlio De Domenico is the head of the Complex Multilayer Networks Research Unit at the Bruno Kessler Foundation in Trento, Italy. He and his colleagues used machine learning to analyze more than 112 million COVID-related tweets in 64 languages About 30 percent of those posts were from “unreliable” sources, as defined by nine publicly available databases such as MediaBias/FactCheck. Waves of unreliable and low-quality information preceded the arrival of the epidemic, exposing countries to irrational social behavior and serious threats to public health. De Domenico’s team also tracked the level of misinformation rising exponentially and then, in some countries, falling as the pandemic progressed. In places where misinformation eventually decreased, local leaders tended to play their part and stop spreading misinformation themselves. For example, German Chancellor Angela Merkel, who holds a doctorate in quantum chemistry, has gained her nation’s trust. She has relied heavily and very publicly on the expertise of a handful of qualified experts. US President Donald Trump, French President Emmanuel Macron, and UK Prime Minister Boris Johnson have not done the same.

The COVID-19 pandemic has resulted in an increased focus on science, which ironically has an associated risk of further eroding the public’s trust in science, especially amongst those who do not understand the nonlinear, consensus-establishing nature of scientific research. Today’s high-profile expert assertions can be disproven by tomorrow’s events, but this is not a shortcoming of science. This is how science works. Epidemiological models, like climate models, are mathematical tools designed to predicted the probability (with large error bars) of certain outcomes under a prescribed set of conditions and assumptions. They are not crystal balls.

When asked what keeps him awake at night, virologist Christian Drosten recently told The Guardian about something he calls the “prevention paradox.” If social distancing works and the curve is flattened people will ask: “Why did we close businesses? Why did we overreact?” Anti-vaxxers commonly use this argument when they claim that the low rates of diseases that are vaccinated against are evidence that the vaccine wasn’t needed in the first place. If all of our mitigation efforts and preventive actions work, the outcome is that we don’t get sick. But not being sick was the state we were in before we took those actions, so it could appear as if science did nothing. If science works to stem the spread and toll of COVID-19, will it reflect badly on science, at least in the public’s eyes?

To mitigate COVID-19 resurgence and to prevent future pandemics, trust in science and global cooperation is essential. The US’s decision to withdraw from the World Health Organization, along with similarly isolating policy decisions, are not going to help. It will just antagonize our allies, which may further weaken our medical supply chains and endanger our epidemiological early warning systems. The reckless COVID-19 blame-game and associated political machinations are endangering US-China cooperation and America’s influence overseas at a time when global cooperation in scientific inquiry is desperately required to deal with the virus.

Marc Zimmer is the Jean C. Tempel ’65 Professor of Chemistry at Connecticut College. Read an excerpt of The State of Science.