ABOVE: Salmon bones deposited by a bear in Great Bear Rainforest in British Columbia
BILL HEATH

Monumental western red cedar (Thuja plicata) and Sitka spruce (Picea sitchensis) cloak the coastal rainforests along glacier-carved fjords from California to Alaska. Resident killer whales (Orcinus orca) frolic in the cold waters after feasting on their favorite Chinook salmon (Oncorhynchus tshawytscha) traveling from the ocean to their natal streams. Ferocious grizzly bears (Ursus arctos horribilis) pluck fish from fast-moving waters where they wait for the arrival of annual salmon (Oncorhynchus spp.), and take their meal to a secluded spot in the forest to eat their favorite parts. The scraps of the carcasses dissolve into the forest floor, and the nutrients are absorbed by the trees through their roots. Salmon rely upon large trees to modulate water flow and stream temperature in exchange for nutrients the fish deliver to the forest in timeless reciprocity. The tendrils of the tree roots reach through the soils, capturing precipitation as it seeps into the ground. Tree roots closest to the streams have access to nutrients from salmon through belowground flows as they return from the ocean for spawning. From tree to tree, the salmon nutrients are transported deep into the forest through an interactive network of mycorrhizal fungal symbionts that connect the roots.

These mycorrhizas—literally “fungus-roots”—are a classic mutualism; the tree provides sugars it produces through photosynthesis in return for vital nutrients and water the fungus collects from the soil. The belowground connections of two sister species of the Rhizopogon mycorrhizal fungus in Douglas fir forests have been mapped using DNA sequencing, showing that the size and age of the trees is positively correlated with their connectivity to other trees. Thus, the biggest, oldest trees are connected to almost all of the other trees through their mycorrhizal linkages. Most importantly, these trees transmit carbon, nitrogen, and defense signals to new seedlings, facilitating the recovery of the forest after disturbances.

These intertwined cycles of life and death are well known to the Aboriginal people of the Pacific Northwest. The ancient Aboriginal stewardship based on principles of reciprocity included practices such as prescribed spring burning, coppicing or pruning to induce desired stem traits, and allowing the biggest salmon to spawn to enhance populations, and resulted in magnificently forested landscapes, often mistaken for pristine and untouched by early colonial immigrants. Thousands of years of rich Aboriginal stewardship produced a tapestry of heritage intertwined with biodiversity and abundance that far exceeded basic subsistence needs.

In the century and a half since the European colonization of western North America, many of these lush resources have disappeared. Only 8 percent of British Columbia’s iconic, large-treed old-growth forests remain, and plans are in place to liquidate most of the remainder, while protected areas are largely marginal forests located on rock, on ice, and in bogs. Canadian forests have switched to being carbon sources instead of sinks as a result of catastrophic fires, insect infestations, clearcutting, and salvage logging. Yet destructive industrial practices continue in the name of “job certainty,” leaving the forest industry in shambles and undermining Canada’s ability to meet its commitments for reducing greenhouse gas emissions under the Paris Agreement.

Salmon stocks have likewise been decimated to a few percentages of their pre-colonization levels, and fisheries scientists struggle to disentangle the effects of overfishing, habitat loss, and climate change. Salmon are among the more than 1,800 species of animals and plants at risk of extinction in British Columbia, mainly due to forest harvesting and land-use changes. The laws for species’ protection are inadequate, and recovery plans are nonexistent or inadequately funded, in spite of Canada’s obligations under the United Nations Convention on Biodiversity. A wide variety of species rely on healthy forests for habitat, and many Aboriginal communities depend on abundant caribou, moose, deer, and salmon as their main sources of food. 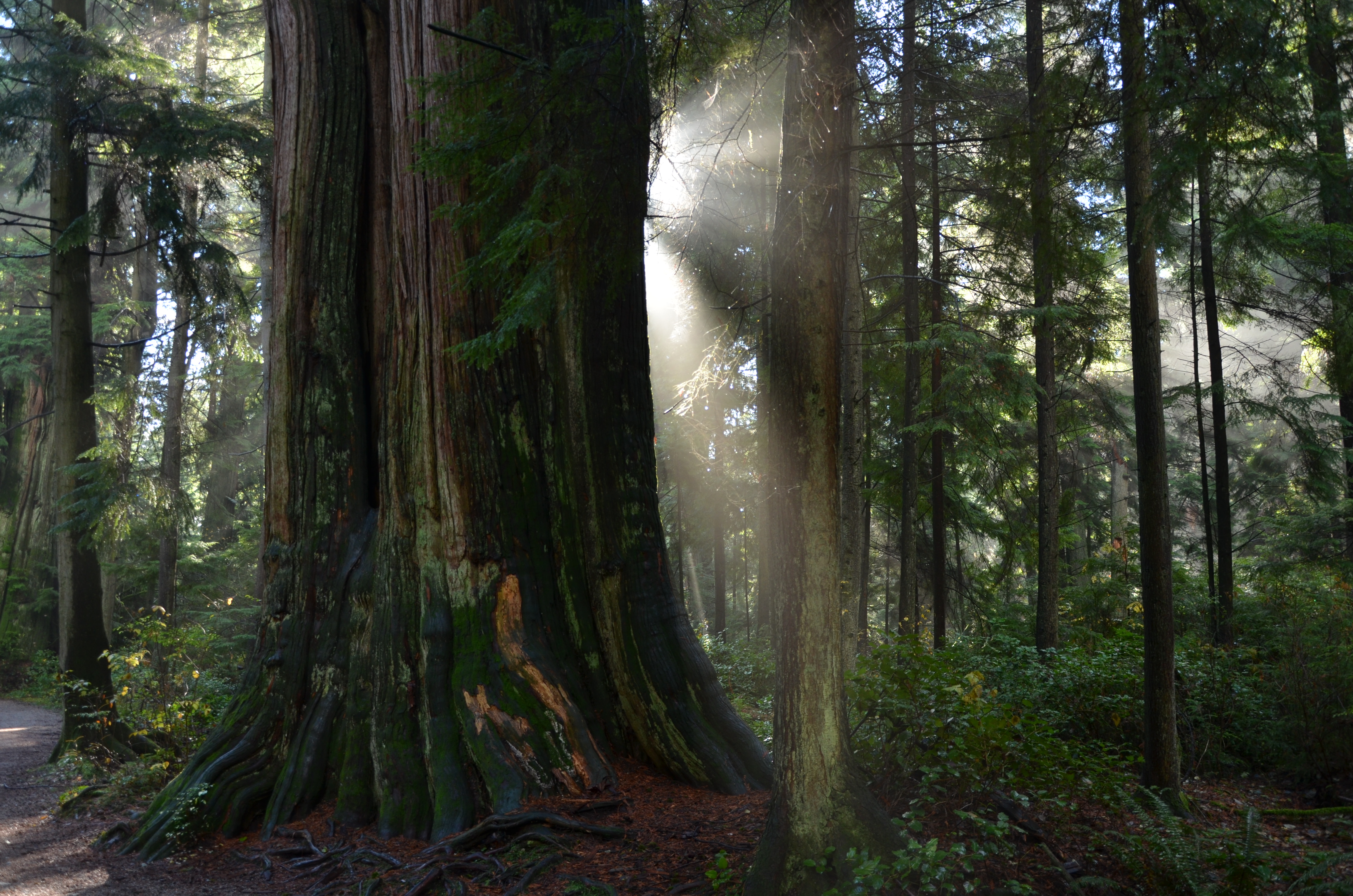 Aboriginal people’s affinities for elder trees are reflected in their world view that all is connected. The western red cedar is known as the “tree of life” for all that it provides. These trees are nurtured in the forest for their use in making canoes, poles, houses, and boxes. The bark and roots are also used for making baskets and clothing. Aboriginal people have long known that roots and fungi provide strong connections between the trees in the forest, much like relationships bind people together in societies. These trees are part of interconnecting complex adaptive systems that span centuries. Remarkably, the trees recognize and favor their own offspring, sending them more resources through their roots than they send to other nearby tree seedlings. As they near the end of their millennium lifespan, the ancients begin to transmit remaining carbon energy and wisdom to their offspring. The importance of elder trees is detailed by one of us (S.S.) in the new book Finding the Mother Tree.

The last of these ancient mother trees are being felled with impunity.

This exploitation needs to stop. Destruction of mother trees in old-growth forests has severe implications for many life forms and for many generations to come.