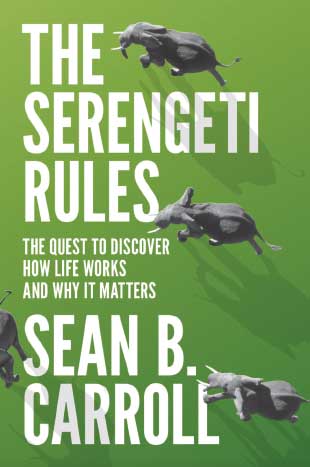 PRINCETON UNIVERSITY PRESS, FEBRUARY 2016A thick, green slick of algae floating on a lake; a troop of baboons raiding a cornfield; a tumor growing in a lymph node—one would think that these three scenes had nothing whatsoever in common.

The analogy is easiest to grasp with algal blooms that contain astronomical numbers of the microscopic photosynthesizers. Under typical conditions, there may be just a few hundred algal cells in a liter of lake water. In a bloom, this can rocket to more than 100 million (108) cells per liter....

When cancer spreads in a person, it can invade and cripple the organs that maintain the body’s homeostasis. When it hits the bone marrow or lungs, the body starves for oxygen; when it invades the digestive organs, the body starves for nutrients; and when it infiltrates the liver and bone, it can throw off the delicate balance of chemicals in the bloodstream. Similarly, the algal mass kills by blocking vital functions in the lake.

The toxins algal blooms produce are highly injurious to fish and other wildlife, wreaking havoc on the food chain. And as the algae die off, they sink to the lake bottom, where bacteria that decompose them use up the lake’s supply of oxygen—suffocating fish and other aquatic organisms, and creating an uninhabitable dead zone with altered chemistry.

Both kinds of cancer, human and ecological, are caused by the breakdown of regulatory mechanisms. In healthy freshwater lakes, algal growth is kept in check by grazers such as small crustaceans that feed on algae, and is limited by the supply of nutrients, especially phosphorus. The immediate catalyst to algal blooms is the surge of phosphorus (in the form of inorganic phosphate) that enters a lake from farms and other sources in the spring and summer. This overwhelms the ability of grazers to suppress the algae. The algal cancer is a combination of too much fuel and too little regulation.

How does this scenario relate to a troop of marauding baboons? It is the same general problem of the loss of regulation, just on a different scale. The animals that suppress baboon populations have declined across Africa. In Ghana, for example, lions and leopards prey on baboons, but the big cats’ numbers have plummeted, and they had disappeared completely from several national parks as early as 1986. As the predators vanished from those parks, the baboon numbers multiplied several-fold and became much bolder in carrying out daylight raids on human villages.

Indeed, across the globe, the loss of big cats, sharks, tuna, cod, wolves, sea otters, coyotes, and many other predators has unleashed overwhelming numbers of prey that have degraded ecosystems and caused other species to crash. So, what’s the remedy for these ecological cancers?

Strategies for improving planetary health can take pages right out of the modern oncologist’s playbook. The task for cancer biologists has been to figure out the key players (molecules) involved in regulating cell multiplication, and the rules that govern their play. With this knowledge, a plethora of medicines that target criti­cal molecules are being developed and used to suppress tumor growth.

Similarly, as ecologists and conservationists have come to recognize the vital role that predators can play in regulating the composition of communities, measures have been taken to protect some species, and in the case of wolves in Yellowstone National Park, even to restore predators to their former ranges, with dramatic effects on habitats.
We have come a very long way in improving human health over the past century, but it is becoming painfully clear that in the decades ahead, understanding how life is regulated at all scales will be essential to repairing and maintaining the health of the lakes, seas, forests, and lands we depend upon.

Sean B. Carroll is Vice President for Science Education at the Howard Hughes Medical Institute and a professor of molecular biology and genetics at the University of Wisconsin–Madison. Read an excerpt of The Serengeti Rules.