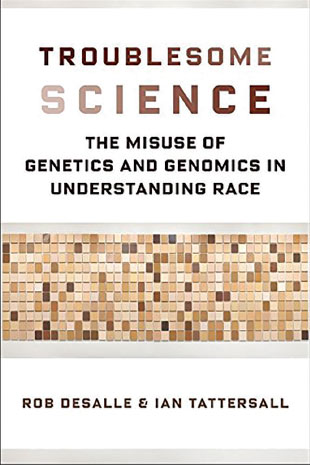 Columbia University Press, June 2018In two opinion pieces that ran earlier this year in The New York Times, David Reich, professor of human genetics at Harvard University, discussed the genetics of race and racial differences. In the first piece, Reich addressed race and the genetics of complex behavioral and anatomical differences among humans. In the second piece, Reich responded to the “hundreds” of letters to the editors provoked by his first essay. Here, we hope to tease apart this highly visible exchange on race between a preeminent scientist and the public.

We find Reich’s two editorials controversial because they seem to further the concept that race is a genetic, biological construct. His underlying claim is embodied in the following quote: “[M]any traits are influenced by genetic variations, and . . . these traits will differ on average across human populations.” It is impossible to argue that this...

At the heart of Reich’s argument is not a fact of nature, but the human mind’s interpretation of what it perceives. Statistician John Gower was quoted as saying in a 1972 symposium: ‘‘The human mind distinguishes between different groups because there are correlated characters within the postulated groups.’’ Gower pointed to this “underlying correlation structure” as a way for humans to find regularity in the “blooming, buzzing confusion” of our world. The first and most obvious way we do this is by visual observation. In New York City, we easily recognize the ethnic background of large numbers of people every day simply by looking. But there is an even larger number of people for whom we cannot infer ethnicity by using our eyes. Genes, even more than facial features, are traces of our ancestral origins and interrelationships. And so genomicists have developed powerful computational and statistical tools that identify underlying correlation structures for the purposes of medicine and ancestry studies.

While genomics is a much more precise way of discovering underlying correlation structure than eyeballing, both modes of observation suffer from the same problems when applied to understanding race. Their most severe deficiency is that defining any population falls prey to a “moving target” syndrome, making the scientific validity of tests for the existence of race fuzzy at best. For example, on the subway we can routinely recognize people who likely have Asian ancestry. We can also visually infer that a subset of those people is from Cambodia. If we look even closer at this group of people, we might see a man and woman with two kids, and recognize familial similarities. This shifting perceptual goalpost dictates the underlying correlation structure we process. And so it goes for genomics.

When we pivot away from trying to round up genetic differences into a basis for races, and turn instead toward a better understanding of their use in interpreting ancestry, we eliminate the very shaky assumption that predetermined, biological races exist. And as we emphasize in our latest book, Troublesome Science, “race is a totally inadequate way of characterizing diverse humankind or even of helping understand humanity’s glorious variety.” All argument, speculation, and prediction made about group traits and the existence of races is therefore suspect.

Rob DeSalle is Curator in the Comparative Genomics Institute and Ian Tattersall is Curator Emeritus in the Division of Anthropology, both at the American Museum of Natural History.