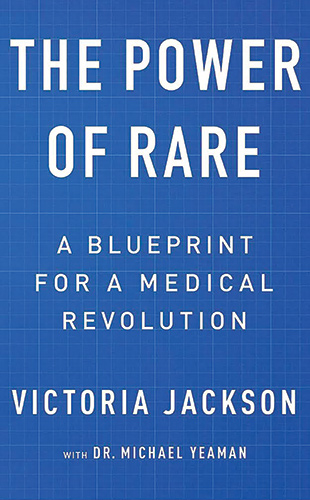 Regan Arts, September 2017In 2008, a young woman named Ali Guthy experienced eye pain out of the blue. Already extraordinary in her academic, athletic, and leadership achievements, at that moment she unknowingly became an example of the power of being rare.

Neuromyelitis optica (NMO) is an autoimmune disease that can cause inflammation and demyelination of the optic nerves and spinal cord. The devastating effects of NMO can include blindness, paralysis, or worse. A decade ago, fewer than 1 person out of 100,000 was thought to be afflicted with NMO worldwide. Like most autoimmune diseases, NMO predominantly afflicts females, and often strikes in the prime of life.

Although NMO is rare, autoimmune diseases collectively occur with the same incidence as heart disease, and twice that of cancer. Yet, little is known about the risks or causes of autoimmune diseases. And while therapies may tame some of them, treatments...

Even amid the complexities of autoimmune diseases such as NMO, exceptions prove the rule. And for Ali’s mother, cosmetics pioneer Victoria Jackson, rare in her own accomplishments, no puzzle was too hard to keep her from trying to save her  14-year-old daughter, Ali, or any patient facing the fear and uncertainty of NMO. In 2008, she launched the Guthy-Jackson Charitable Foundation, an organization that views each rare-disease patient as an essential piece in solving the cure puzzle.

In just one decade, the immunology, diagnosis, and treatment of NMO has been transformed. The foundation united an International Clinical Consortium of more than 90 members representing 30 countries. This group has published dozens of state-of-the-art papers that rethink scientific dogma and hundreds of research articles in leading journals that reveal a new understanding of NMO and related autoimmune diseases. It is now evident that autoreactive T cells drive the cascade of events leading to B cells making autoantibodies targeting the water channel protein aquaporin-4. The book The Power of Rare: A Blueprint for a Medical Revolution tells the foundation’s story and how it has positioned research on NMO as a model to solve other diseases.

The foundation also built an NMO biobank called CIRCLES (Collaborative International Research in Clinical and Longitudinal Experience for Neuromyelitis Optica Studies) to harness the collective power of NMO patients and their relatives. Presently, CIRCLES has enrolled more than 1,000 patients, and the research it has enabled is opening the locks to solving NMO.

With its panel of experts, the foundation also rewrote the book on NMO diagnosis. Once believed to be a rare form of multiple sclerosis (MS), it is now clear that NMO is not MS—a fact that has helped both NMO and MS patients receive more-rapid and accurate diagnoses and care. Currently, 10 out of every 100,000 people are diagnosed with NMO in some regions of the world.

While there were no clinical trials focusing on NMO for more than a century after it was first identified, there are presently three Phase 3 clinical trials nearing the finish line—and more coming.

The Guthy-Jackson Charitable Foundation continues to work on new initiatives, such as identifying biomarkers that predict relapse, to prevent the life-threatening immune attacks that are hallmarks of NMO. And beyond therapies, the foundation has launched its mission for tolerization to find cures. Tolerization in autoimmune disease aims to retrain the body’s immune cells to stop attacking it’s own tissues. In this way, rebooting the immune system to end the underlying causes of NMO may lead to a cure, sparing patients from the risks of lifelong immunosuppressive therapy.

Achieving this goal will open doors to solve rare and common autoimmune diseases alike. From rheumatoid arthritis to type 1 diabetes to MS—even to stealthy cancer cells and infections that defeat immune responses and resist treatment—there has never been a more urgent need for immune health. The revolution of personalized and precision medicine is upon us—if only we take purposeful action together. We are all rare.

The strength of one—raised to the benefit of all—that is The Power of Rare.