Whenever a living organism is good at something, there’s the understandable temptation to explain matters by invoking natural selection. The insight that organisms are more likely to pass on traits to offspring if those traits help with surviving and reproducing sheds light on many aspects of biological form and function, from quirks of anatomy down to the fine points of how proteins are assembled.

It is a little bit dangerous, though, to get in the habit of telling these stories about every bit of biology.

As I wrote in my new book, Every Life Is on Fire, recent theoretical progress warns against such a rush to judgment. What is becoming increasingly clear is that interacting collectives of “dumb” particles can evolve into specialized structures with fine-tuned relationships to their environment even in circumstances where there is no self-copying entity in the system to enable natural selection. This dissipative adaptation is a broadly applicable physical mechanism based on the simple idea that energy both helps collections of particles to change their state of assembly, and is processed differently by a system depending on its current state of assembly. The combination of these two facts leads to a feedback loop, whereby a set of building blocks can perform an exploration of possible combinations guided by how well each combination absorbs energy. 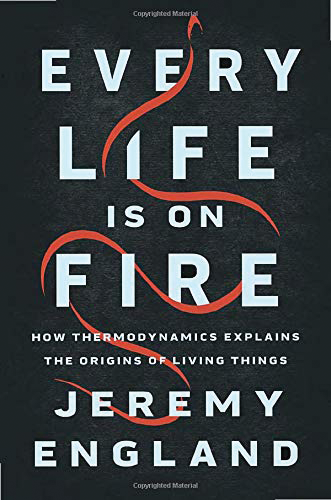 Already, researchers have identified examples of dissipative adaptation that lead to a range of energy-harvesting or computing-like behaviors in disorderly material collectives that are subject to patterned sources of energy in their environment. A network of entangled masses and springs, for example, can “learn” to resonate at the particular frequency of an oscillating force from the environment, so that the rate of energy absorption increases over time.

Many, if not most, proteins must be thought of as metastable tangles whose conformational changes and mobility are a function both of what else they are bound to and of how much ATP or other energy-bearing substrate is being processed in their particular configuration. Many proteins function in a state that is highly managed by the activity of ATPase molecular chaperones that burn through chemical fuel as they chomp down on substrate proteins until those proteins are knocked into the right shape. What emerges is a vivid picture of the cell as a self-organizing machine capable of adaptive emergence that may reflect complex “learned” responses to recent environmental patterns of energy input.

Understanding how fine-tuned adaptive relationships between system and environment can arise without natural selection potentially restructures science’s vision of the ingredients needed for life to come together. Initially uncoordinated molecules can form a society of sorts that already looks like it is making accurate predictions about its surrounding world or optimizing access to sources of energy. This system, then, has a richer toolbox to work with than the naive “random soup” often imagined as primordial conditions.

Furthermore, there are practical implications in the present-day study of living things that we can also derive from the same physics. An emerging literature in experimental cell biology has revealed many membraneless cellular compartments that seem to self-organize in response to a wide variety of stress conditions and other environmental changes. We tend to think of organelles as being genetically programmed, fixed features of architecture that form according to static rules. But there appears to be a spectrum of organelle-like subcellular structures that can come together as needed under a wide variety of conditions.

So how much of what is going on had to be carefully optimized by the slow process of Darwinian selection, and how much might have been available in some first-draft version just from the self-organizing properties of a motley mixture of fuel-burning protein complexes? Although experimental science is just beginning to open up the necessary frontier for this discussion, it is exciting to consider that there may be a great deal of plasticity and intelligence in the components of life. Perhaps some cells or molecules automatically respond to stimuli based on how they are built. Developing a coherent understanding of the physics of such systems could help us ask questions that will make detecting such phenomena possible.

Jeremy England is senior director in artificial intelligence at GlaxoSmithKline, principal research scientist at Georgia Tech, and the former Thomas D. and Virginia W. Cabot career development associate professor of physics at MIT. Read an excerpt of Every Life Is on Fire.