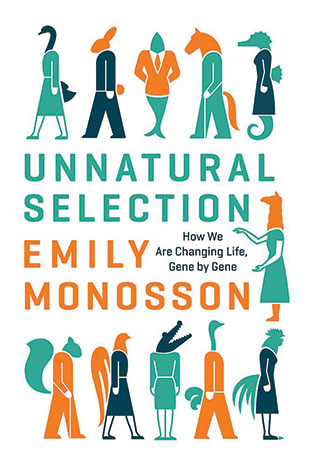 ISLAND PRESS, NOVEMBER 2014My sister-in-law, the doctor, was losing her mind. She awoke every morning to oozy-itchy bites. At first she’d thought it was fleas, courtesy of the family pets, but she was the only one suffering. The culprits, she eventually realized, were bed bugs. Who knew? For those of us of a certain age, bed bugs belong in old nursery rhymes, killed off decades ago by a cloud of DDT. Yet the critters, which survived in small pockets here in the U.S. and in other countries, are now making a comeback worldwide: in cities, college dorms, even upscale hotels.

At a recent meeting of environmental toxicologists and chemists, I asked for a show of hands indicating those who had experienced bed bugs personally. While my graying colleagues looked befuddled, several grad students and undergrads timidly raised their hands. Bed bugs have returned, but this time around...

In Unnatural Selection: How We Are Changing Life, Gene by Gene, I explore the consequence of evolution in response to antibiotics, pesticides, herbicides, pollutants, and even chemotherapy. What happens when life is faced with synthetic chemicals unlike any found in nature? We know now that hundreds if not thousands of species have undergone microevolution—small changes within a population—in response to industrial-age chemicals. What are the costs of this kind of microevolution? How can the dangers be mitigated? The book touches upon nature’s awesome defensive tactics: enzymes tweaked just enough to take the bite out of a chemical attack while maintaining their original function; pumps that act like bouncers at a popular bar; target genes copied tens if not hundreds of times.

That toxic chemicals provide powerful selective pressures should be no surprise. Early last century Alexander Fleming warned that if not careful his precious discovery, penicillin, would lose its punch. Decades later Rachel Carson warned us again, writing of “the chemical barrage [that] has been hurled against the fabric of life—a fabric on the one hand delicate and destructible, on the other miraculously tough and resilient, and capable of striking back in unexpected ways.”

Today, bed bugs are striking back; so too are a host of pathogens, including totally drug-resistant tuberculosis and nearly drug-resistant gonorrhea. Many cancer patients live in fear that their errant cells might evolve to evade treatment. Evolution in response to pollutants may also have broad implications, disrupting species less able to respond rapidly.

Some bed bug populations have evolved resistance genes that are most active in their cuticles, warding off pesticides with biochemically active suits of armor. Other organisms employ a variety of mechanisms that are common across taxa (a topic worthy of follow-up study); a few, like plasmid exchange in bacteria, are not. Recent studies indicate that chemicals may also induce epigenetic changes that may affect gene expression across multiple generations. Our evolutionary footprint is large. But even as we tabulate our ecological, material, carbon, and water footprints, so far we have paid little collective attention to how we are influencing evolution.

Yet as many in the businesses of health care and agriculture have seen firsthand, we can change the dynamic. We can reduce the selection pressure by using less of a particular antibiotic or pesticide. Or we can combine or alternate chemicals; encourage the selection of detrimental traits; or back away from chemical use altogether. Bed bugs, for instance, can be killed by both heat and cold—though these techniques are not always feasible. Fortunately my sister-in-law’s uninvited houseguests were not yet resistant to the pyrethroid insecticides: a nonorganic concession made under duress. But the odds are against us. When we challenge life to evolve or die, we don’t get to pick and choose the winners. Nature does that for us.

Emily Monosson is an independent biochemical toxicologist, writer, consultant, and college instructor. She is an adjunct professor at University of Massachusetts, Amherst. Read an excerpt of Unnatural Selection: How We Are Changing Life, Gene by Gene.