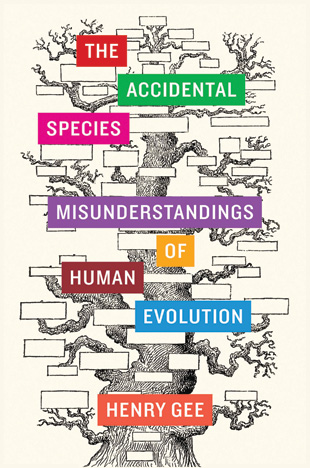 UNIVERSITY OF CHICAGO PRESS, OCTOBER 2013It happened years ago, but the event was so traumatic that I remember it as if it were yesterday: an elderly professor physically pinned me against a wall and berated me for rejecting his paper on why human ancestors got up on their hind legs and walked. “The reason,” frothed the empurpled sage, “was to make it easier for mothers to carry babies close to their chests.” See? So blindingly obvious that anyone, even I, could understand it.

Manuscripts seeking to explain the evolutionary roots of human bipedalism land in my in-box at Nature with monotonous regularity. We became bipeds so that we could carry food, or tools; so we could see farther; so we wouldn’t expose so much of our skin to the Sun; so we could wade better in rivers and lakes. They all make good stories, but they all...

Natural selection, the mechanism of evolution, operates without memory or foresight. It has no intention. It is we who choose to interpret evolutionary purposes as such later on. The features of living things, therefore, do not evolve for any preconceived purpose that we can discern. I explain how such misunderstandings color our understanding of human evolution in my latest book, The Accidental Species: Misunderstandings of Human Evolution.

But none of this stops me having my own go at understanding why humans came to walk on two legs. In my view, it all happened by accident.

Bipedalism is just one of the many peculiarities of human anatomy and behavior that set us apart from our closest relatives, the great apes. We are also much more social than they are, we have unusually large brains, we have much more body fat, and we are much less hairy. The differential distribution of fat and hair happens to be strongly correlated with sexual dimorphism.

On the subject of sex, women’s furless breasts are prominent at all times, not just when women are lactating. Unlike female chimpanzees, our closest living primate relatives, women do not advertise estrus—the time of maximum fertility—by the swelling of the sexual organs. And while we’re talking about advertisement, men have the largest penises, relative to body mass, of any ape. A male gorilla might weigh twice as much as an adult human, but he’s lucky if he ever gets an erection more than inch long.

But if humans’ prominent breasts and big penises are made obvious by hairlessness, they are made more so by bipedalism, which displays everything for all to see. In which case, standing upright could be a by-product of sexual selection, in which mates choose one another on the basis of features that might represent outward signs of inward genetic health.

Some sexually selected features, though, appear have been chosen at random when, by chance, a trait in one sex becomes associated with the preference for that trait in the other, leading to runaway positive feedback, survival value be damned. The massive train of the peacock is a good example. It looks flashy and attracts mates, but costs a great deal of energy to make and maintain, and hobbles a peacock trying to flee from predators. The transition to bipedalism might be seen in the same way: it was selected because it better advertised our sexual wares, but hobbled us in other ways.

The imposition of walking upright on a fundamentally quadrupedal design has prompted a thorough reworking of the entire human body, making back pain one of the single biggest causes of worker absenteeism in the world. Rather than an adaptation, bipedalism could be a dreadful kludge, forced on us by sexual selection in defiance of gravity and common sense.

Now, I advance the above more than half in jest. It’s possibly no better or worse than any other idea, but I’m not going to pin anyone against a wall and shout about it.

Henry Gee is a senior editor at Nature, and the author of Jacob’s Ladder: The History of the Human Genome, In Search of Deep Time, and The Science of Middle-earth. Read an excerpt of The Accidental Species.