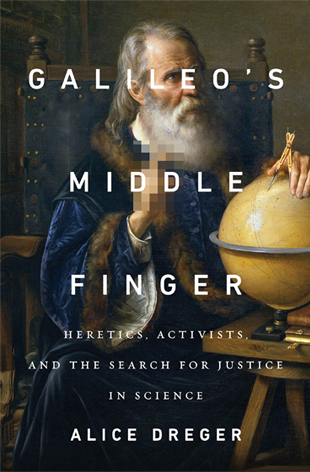 PENGUIN PRESS, MARCH 2015Three important insights I’ve gained from studying what has happened to scientists whose research has ticked off activists working within social justice movements: (1) If you want to get in trouble, study sex. (2) Anybody who tells you “all publicity is good publicity” has never been accused of genocide. (3) Death threats are rarely grammatically correct. I illustrate each of these lessons in my new book, Galileo’s Middle Finger: Heretics, Activists, and the Search for Justice in Science.

First off, Mama was right: Sex is gonna get you in trouble. While it is true that you can also tick people off by making challenging scientific claims about alien abductions, chronic Lyme disease, or race—especially race—the surest route to having your reputation threatened is to contradict some deeply held belief about sex.

As these people discovered, when your work gets labeled “controversial,” you should expect that few of those criticizing you will actually read your publications; they’re much more likely to go after you as a caricatured messenger than to engage in dialogue about your actual message.

This, then, takes us to the second point: Anybody who tells you “all publicity is good publicity” has never been accused of genocide. Being accused of genocide isn’t one of those things for which you start a clippings file that you figure your grandchildren might someday like to have.

Just ask anthropologist Napoleon Chagnon, tried in absentia by the American Anthropological Association (AAA) because of allegations leveled in Patrick Tierney’s 2000 book Darkness in El Dorado. Chagnon and geneticist James Neel were raked over the coals for two years in spite of the fact that Tierney’s claims of unethical experimentation on South American natives were false and (as I show in my book) the leaders of the AAA’s investigation team knew his book was “just a piece of sleaze.”

Now, while the charge of genocide is usually reserved for those who are already renowned scientists, like Chagnon, the charge of being a eugenicist is readily available to the average scientist. For example, neuroscientist Charles Roselli’s work on homosexual male sheep attracted charges of “gay eugenics”—ultimately leading to animal-rights and gay-rights proponent (and tennis champion) Martina Navratilova publicly condemning the research. You can’t make this stuff up.

The good news: Death threats are rarely grammatically correct. Why is this good news? Because it suggests that the people who see themselves as your worst enemies—those who send violent threats—are typically not the well-educated, more reasonable people you have some chance of talking sense into.

And if, like Chagnon, you’re lucky enough to have colleagues who bother to challenge falsehoods—or if you’re super lucky, like Roselli, and have a university-relations expert named Jim Newman who helps you respond to 20,000 e-mails calling for your termination by disseminating facts about your work—then you have some hope.

Alternatively, you could try to avoid controversial work. The thing is, thanks to the Internet, just about anything you study could incite controversy. So instead, I’d suggest this: (1) The minute you’re in hot water, create a plain-language FAQ about your work; (2) Don’t believe what you read about yourself on the Internet; (3) Take comfort in being in truly excellent company among all the other eugenicists. I know I do. 

Alice Dreger is a historian of science and medicine and professor of clinical medical humanities and bioethics at the Feinberg School of Medicine, Northwestern University in Chicago. Read an excerpt of Galileo's Middle Finger.