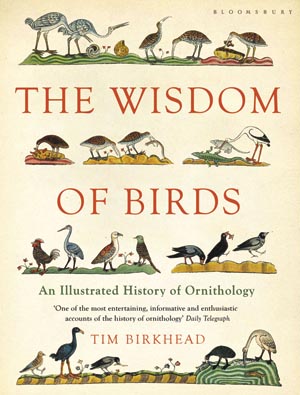 For more than 100 years, it was widely assumed that the majority of female birds were sexually monogamous. Charles Darwin himself seems to have started that little rumor. In 1871’s The Descent of Man, he is quite explicit: “The female, though comparatively passive, generally exerts some choice and accepts one male in preference to others.” Darwin was equally clear about the behavior of male birds: they were, like human males, often promiscuous.

Darwin’s ideas were so influential that for the ensuing century, the notion of female fidelity remained unchallenged. My 2008 book, The Wisdom of Birds, out in paperback this month, tells the story of how ornithologists eventually overcame Darwin’s assumption, along with other lessons we’ve learned from studying birds.

It’s likely Darwin knew it wasn’t true. He kept pigeons, and it was well known among pigeon fanciers that the birds engaged in extrapair copulation....

He was probably playing it safe. In Victorian England it simply wasn’t appropriate for a well-respected gentleman scientist to draw attention to the existence of female promiscuity, let alone to justify it in biological terms.

But Darwin wasn’t just bowing to pressure from contemporary society. His daughter Etty helped check proofs of his books and also acted as her father’s censor, striking out what she considered inappropriate passages. When Darwin did have to discuss topics he didn’t want Etty to read about, such as the sexual swellings of female primates, he wrote the section in Latin, which she couldn’t translate. When it came to female promiscuity, he took the easy way out and ignored it.

In the mid-1960s, David Lack, arguably the most influential ornithologist of the 20th century, conducted a wide-ranging survey of the mating systems of birds and “confirmed” that, more than 90 percent of all bird species breed as pairs. His implicit assumption, following Darwin, was that monogamy meant female fidelity.

By the time Lack’s results were published, more ornithologists were conducting behavioral studies of birds banded with colored rings, enabling researchers to recognize them as individuals. They noticed that females were not always sexually monogamous. Such was Darwin’s reach that researchers explained away these anomalous results by blaming the males and assuming that they had hormone imbalances!

The results are startling. Almost every bird species previously assumed to be faithful exhibits some degree of infidelity. Certainly, there are a few truly monogamous birds, such as the mute swan, but in most species some females have some of their eggs fertilized by males other than their partner. In species like the European reed bunting, despite the maintenance of a monogamous pair bond, more than 75 percent of all eggs are fertilized by other males’ sperm.

The benefit of promiscuity for males is clear—more offspring. But what do females gain from being unfaithful? Despite 25 years of research, and paternity studies of some 150 species, we still do not know the answer. It may be that just as with the shift in evolutionary thinking in the early 1970s, another paradigm shift in our thinking is required to answer this question.

Tim Birkhead, a Fellow of the Royal Society, is professor of zoology at the University of Sheffield, UK. His research—mainly on birds—has taken him all over the world. He has won awards for his undergraduate teaching and is committed to the public understanding of science. Read an excerpt of his book.