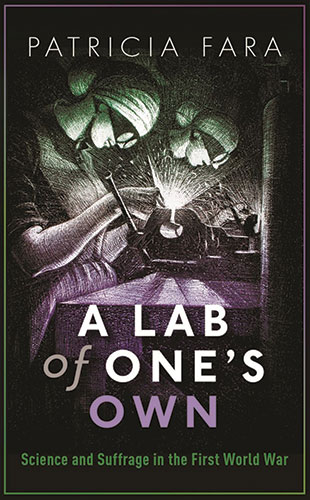 OXFORD UNIVERSITY PRESS, MARCH 2018When Marie Skłodowska Curie embarked on a fund-raising tour of the United States in 1921, she was amazed to see female students being taught alongside the men. In Curie’s adopted home country of France, married women belonged to their husbands and were not allowed to earn money in their own right. In the U.S., many thousands of independent American women greeted her with rapturous applause, lavishly donating the equivalent of more than $1 million to buy a whole gram of radium for her research institute in Paris. Yet despite their relative liberation, American women by and large regarded Curie as exceptional, too extraordinary to provide a realistic role model.

One of Curie’s closest friends was Hertha Ayrton, an English physicist and militant suffragette. She had won a Royal Society medal for her groundbreaking research into electric lighting, but was turned down for...

These days, the principle of gender equality is widely enshrined in law, but the problems of unequal numbers and unequal salaries remain unresolved. When I started writing A Lab of One’s Own: Science and Suffrage in the First World War, I wanted it to be more than just a book about long-gone events. My fundamental aim as a science historian is to analyze how the past led to the present—and the whole point of doing that is to improve the future. Through exploring the setbacks and successes of my grandmothers’ generation, I came to understand more about my own experiences in science. Armed with those insights, I hoped to ensure better opportunities for up-and-coming female scientists.

Researching those wonderful suffrage pioneers made me appreciate their effects on my life. Deep inside an experimental trench dug in the grounds of London University, the chemist Martha Whiteley headed a seven-woman team researching tear gas and explosives—and after the War was over, she continued to fight against reactionary scientists, insisting on equal terms regardless of gender. Suffrage leader Ray Strachey’s passion was mathematics, but she gave it up to campaign for the vote and train women for scientific work. The first female science lecturer at the University of Manchester was Marie Stopes; she later transformed millions of lives with her practical advice about birth control. And Mabel Elliott opened up opportunities for women in the Civil Service when she foiled a German spy ring by heating a letter to reveal secret messages written in lemon juice.

Blatant discrimination may have disappeared in the intervening decades, but there are other ways of making women feel like outsiders. My teachers encouraged me to aim as high as Curie, but modern shops and toys are color-coded pink and blue, while the only two-time female Nobel laureate is caricaturized as a resolutely unsentimental woman working long, lonely hours without concern for food or comfort. As an Oxford physics student, I was not surprised to discover that I was outnumbered by men 25 to 1, but the concealed prejudice was harder to bear. Even now, university reading lists include few articles by women, and female portraits are absent from corridor walls. No wonder schoolgirls feel ambivalent about a scientific career.

During the War, women proved that they could carry out—or even do better—the scientific jobs normally reserved for men. Strachey declared in 1927: “The establishment of equality of pay and opportunity for women may lie far ahead in the future; but that it does lie there is beyond question.” To reward her confidence, the scientists of today must continue fighting to make her prophecy come true.

Patricia Fara is President of the British Society for the History of Science and a Fellow of Clare College, Cambridge. Read an excerpt of A Lab of One's Own.